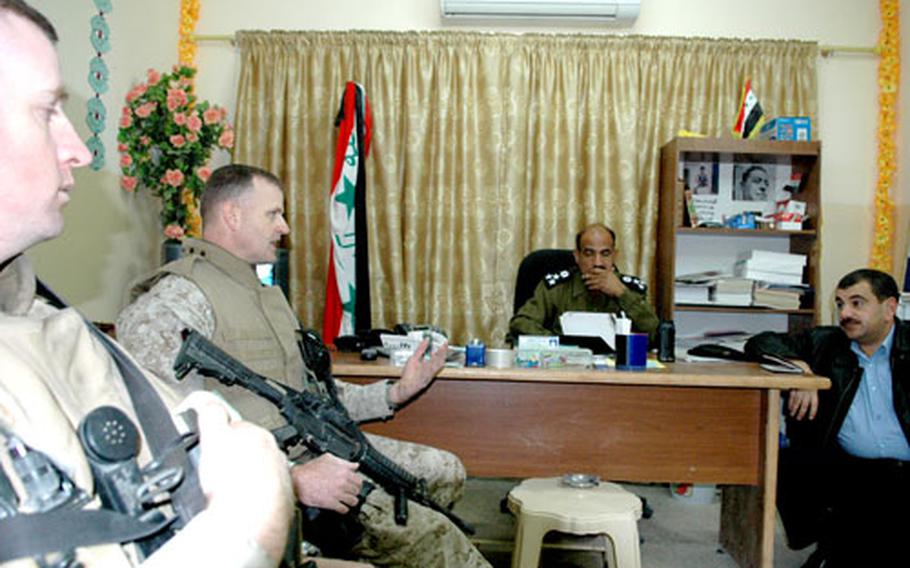 KARMAH, Iraq &#8212; Even the police are scared in this mostly Sunni city just a few miles east of Fallujah.

The exchange came at a meeting last week as U.S. troops try to install a new police department in this city of roughly 50,000 before next week&#8217;s national elections.

Like several other cities just outside Fallujah, this dusty and densely populated city has become a staging ground for insurgents operating just outside the ring of security checkpoints that restrict access to the volatile urban center.

Before the new batch of police move in, the Marines are trying to lay out their expectations for the new security force, which will be an extension of the existing Fallujah District Police Department.

&#8220;There is one thing you need to understand,&#8221; Lt. Col. Bill Mullen, the operations officer for the Fallujah-based Regimental Combat Team 8 (RCT 8), told the designated Karmah police chief and several other Fallujah police leaders.

&#8220;The police will not be sitting inside the police station afraid to go outside. It&#8217;s very important the police push out into the neighborhood,&#8221; Mullen said.

&#8220;From the day you set foot out there, you are going to be in charge of that town. If you get attacked, you need to show them that that kind of behavior is not acceptable.&#8221;

For several months, the Marines have patrolled the city of Karmah every day with few problems.

Nevertheless, a previous effort to set up a police force this fall ended in failure, and the police bracing to move in here may have good reason for fear.

Shortly after the constitutional elections in October, the Iraqi police first tried to set up a permanent security force after U.S. forces paid $315,000 to renovate a police station.

But within days, a throng of masked insurgents accosted four officers patrolling through the bustling market place. In a public show of force, the insurgents demanded the police surrender their American-bought flak vests and Kevlar helmets, then shot the men, leaving their bodies lying in the midday sun.

About two weeks later, insurgents mounted a full-scale assault on the police station with a barrage of bullets and rocket-propelled grenades, sending the dozens of police fleeing and ending any semblance of police presence in the city.

Since early November, Marines have occupied the station to prevent insurgents from taking over or destroying the structure.

Now, Marines from the Camp Lejeune-based 2nd Battalion, 2nd Marine Regiment here are waiting for a new crop of police to show up and try again in preparation for next week&#8217;s nationwide elections to select local and national officials.

The initial effort to set up a police department was &#8220;a token effort&#8221; with just a few dozen officers, said Maj. Kevin Clark, the Iraqi security forces coordinator for RCT 8.

Problems were compounded by the fact the police were not getting paid due to financial problems at the Iraqi Ministry of the Interior, Clark said.

And many of the police were hired from Fallujah and other cities rather than from Karmah itself.

The Marines want to support the new police force, but that effort is complicated by local politics that prohibits them from openly training and working with the police.

Local police are a critical piece of the plan for long-term stability in Iraq, said Capt. Joel Schmidt, the company commander who oversees the city of Karmah.

&#8220;We say this is a counterinsurgency, but in many ways this is really just about countering crime,&#8221; Schmidt said.