Marines try to make the most of Thanksgiving in Afghanistan 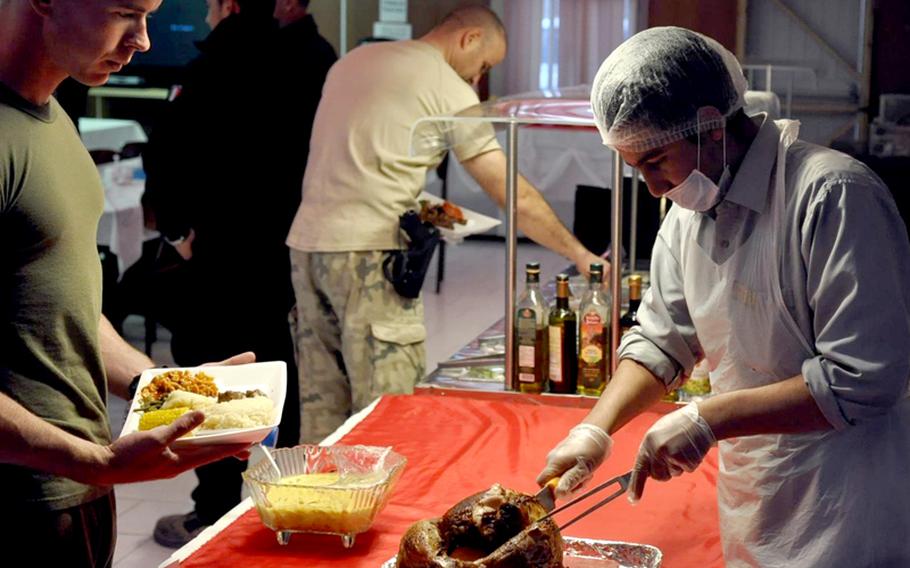 Buy Photo
Marine Cpl. Adam Powell, 24, of Greenville, S.C., waits for some turkey Thursday night at the Adraskan National Training Center in western Afghanistan. Fifteen Marines celebrated the holiday here in the midst of a deployment where they are training Afghan police. (Geoff Ziezulewicz/Stars and Stripes)

Buy Photo
Marine Cpl. Adam Powell, 24, of Greenville, S.C., waits for some turkey Thursday night at the Adraskan National Training Center in western Afghanistan. Fifteen Marines celebrated the holiday here in the midst of a deployment where they are training Afghan police. (Geoff Ziezulewicz/Stars and Stripes) 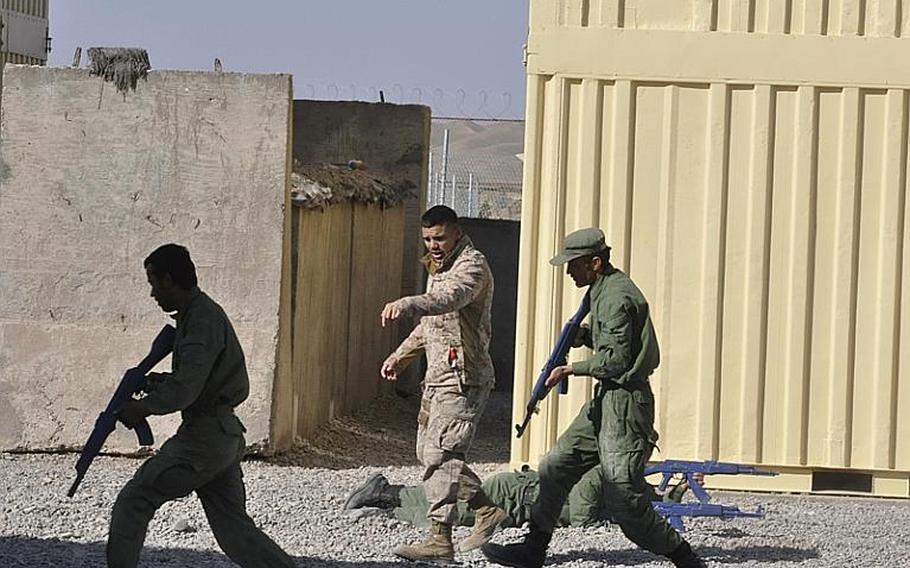 Buy Photo
Before the 15 Marines stationed at the Adraskan police training center in Afghanistan's Herat province could enjoy their holiday Thursday, there was work to be done. Lance Cpl. Mark McCart, 19, of Fountain, Colo., took some recruits through the motions Thursday morning. (Geoff Ziezulewicz/Stars and Stripes) 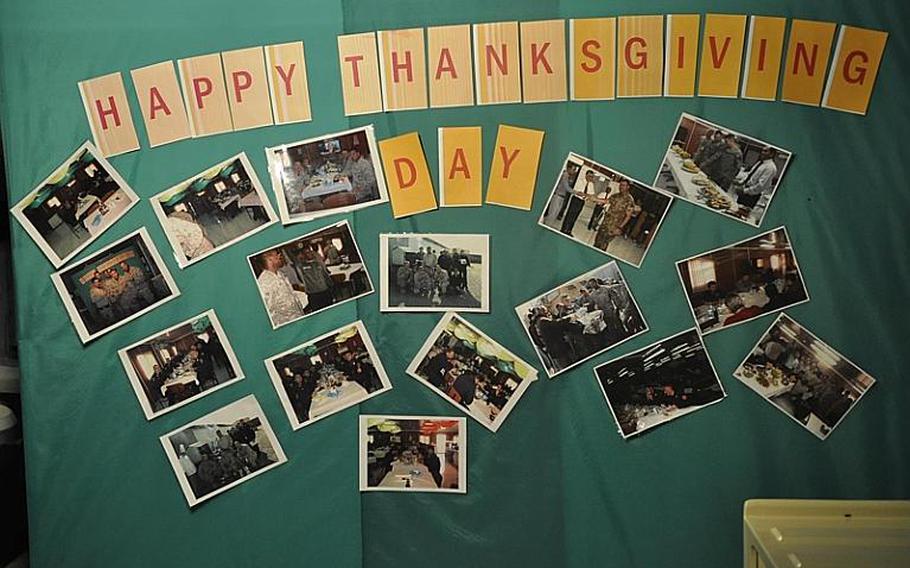 Buy Photo
The Thanksgiving chow was provided by the HEB contracting company, and workers decorated the chow hall. (Geoff Ziezulewicz/Stars and Stripes) 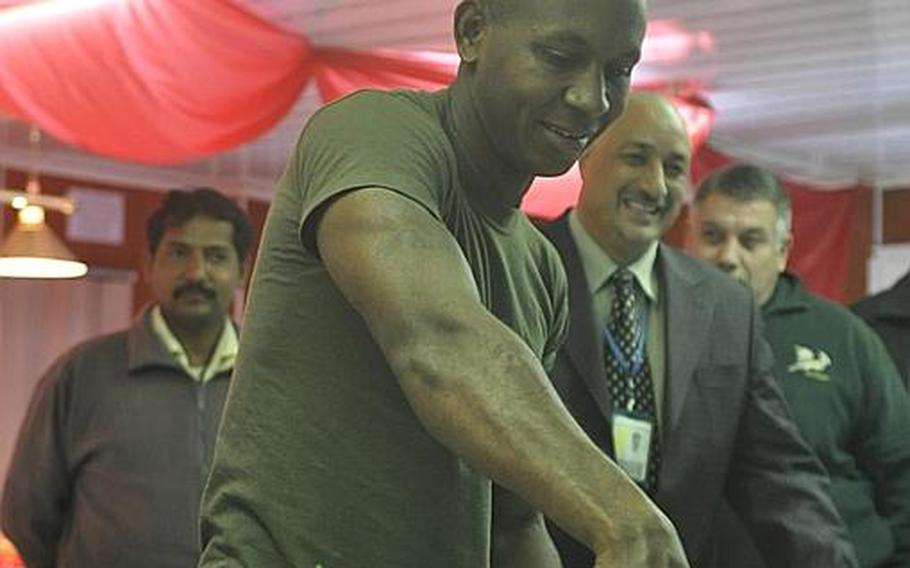 Buy Photo
Marine Private 1st Class Ysnardy Torres, 21, of New York City, is the junior-most Marine among the 15 training police recruits at western Afghanistan's Adraskan National Training Center. On Thursday, being the lowest rank meant Torres was the first to carve up the turkey. (Geoff Ziezulewicz/Stars and Stripes) 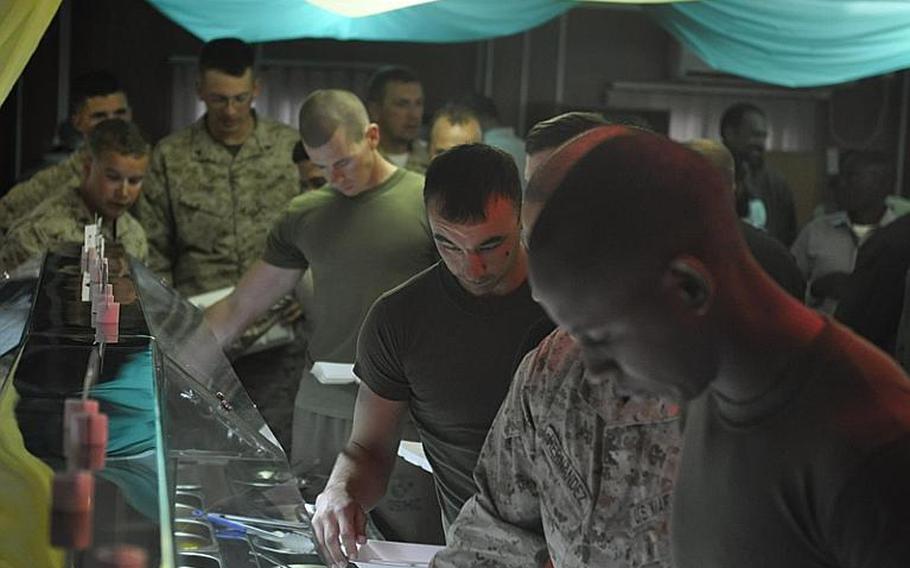 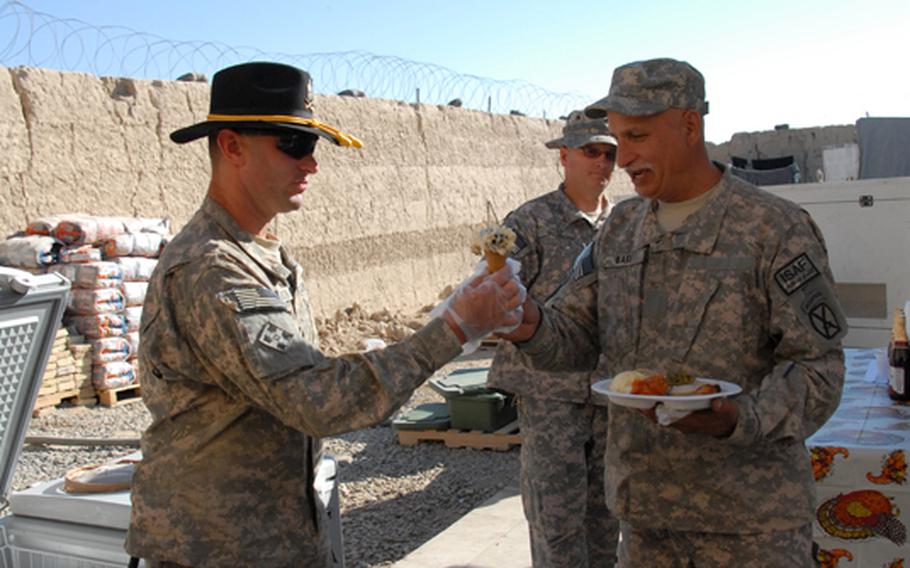 Buy Photo
With calls of ''cup or cone'' before soldiers were even through the line getting their Thanksgiving meal, First Sgt. Philip Harrison eagerly scooped cookies-and-cream ice cream for the soldiers of 1/71 Cav. They walked away with plates piled high with yams, turkey and mashed potatoes and and ice cream dripping down their hands. (Megan McCloskey/Stars and Stripes) 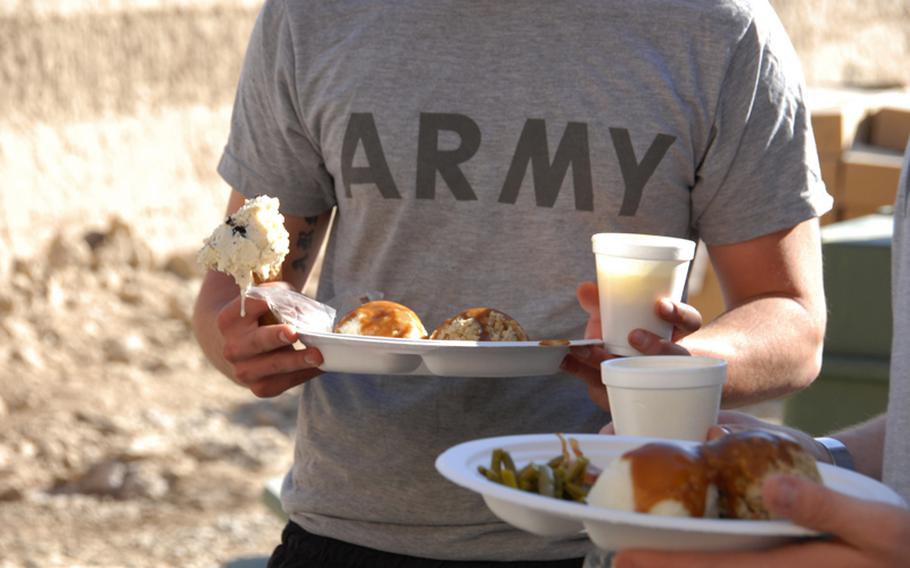 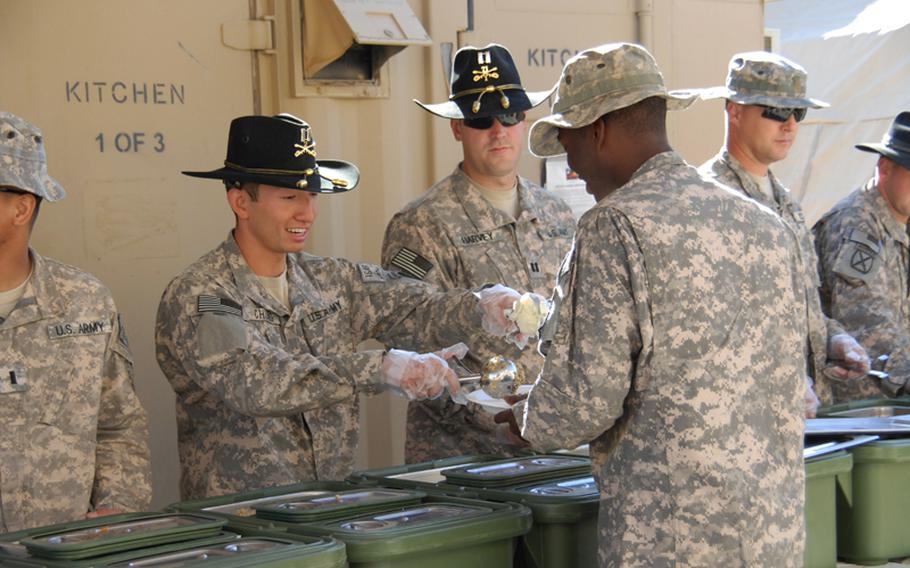 Buy Photo
Capt. Woowon Chung dishes out stuffing and mashed potatoes at FOB Tarnek in the Dand district of Kandahar Thursday for troops with 1st Squadron, 71st Cavalry Regiment, 10th Mountain Division out of Ft. Drum. Some of the officers rocked their stetsons as they served the meal to the enlisted soldiers. (Megan McCloskey/Stars and Stripes)

ADRASKAN NATIONAL TRAINING CENTER, Afghanistan &mdash; If he were back home Thursday, Marine Lance Cpl. Chad Berry would have eaten turkey and ham at the home of one of his sets of grandparents in Tennessee. If it was his father&rsquo;s side of the family, they&rsquo;d go deer hunting after dinner, then come home and eat some more.

Back home, Pfc. Ysnardy Torres, 21, would be in New York City, visiting family in three boroughs, eating a lot of shredded turkey and his aunt&rsquo;s flan, a type of custard dessert.

&ldquo;I&rsquo;d be going from house to house, getting food,&rdquo; he said Thursday morning while training Afghan police recruits at the Adraskan National Training Center in western Afghanistan. &ldquo;It starts in Brooklyn, to the Bronx, to Queens and then back to Brooklyn. I&rsquo;d be tearing that (expletive) up.&rdquo;

If he wasn&rsquo;t deployed here with 14 other Marines, Lance Cpl. Gordon Sherburne would be at his Uncle Wade&rsquo;s house in Mesick, Mich., chowing down with 50 other members of the Sherburne clan.

&ldquo;I&rsquo;d be watching the Dallas Cowboys play &mdash; that&rsquo;s my wife&rsquo;s team &mdash; and eating some green beans with bacon, ham and stuffing,&rdquo; 19-year-old Lance Cpl. Mark McCart said of his holiday plans were he back in Fountain, Colo. &ldquo;And just chill.&rdquo;

Thoughts inevitably turned to home Thursday for these Marines and the thousands of other U.S. troops overseas on such a family-focused holiday. It&rsquo;s a day for which it&rsquo;s difficult to be away.

&ldquo;It&rsquo;s even harder than Christmas,&rdquo; said Berry, 21, of Dunlap, Tenn.

&ldquo;It (expletive) sucks,&rdquo; Torres said of holidays far from home, adding that the Internet only makes him realize the good times his loved ones are having back home. &ldquo;I don&rsquo;t even go on my Facebook.&rdquo;

Still, Marines make do. Thursday is a half-day of work here, and everyone&rsquo;s off Friday, so Thanksgiving synched well with the training schedule.

The contractors in charge of the chow hall pulled out all the stops, and the Marines, Italian and Polish troops were treated to a gut-busting lunch and dinner. There was turkey, discs of a pre-formed sausage and stuffing concoction, as well as mashed potatoes, but there was also grilled lobster and steaks.

Before supper, Army Lt. Col. Mike King, who oversees the base, reiterated the story of the pilgrims and the first Thanksgiving in 1621 for the non-Americans in attendance.

&ldquo;Today we don&rsquo;t have the venison or the wild fowl, but we do have turkey,&rdquo; he said before everyone dug in.

Many of the Marines were thankful for the things most people appreciate: family, friends and good health.

Sherburne said he was thankful to be at Adraskan, because, &ldquo;I&rsquo;m lucky I got a good deployment.&rdquo;

And though he was missing the honeyed ham at his grandparents&rsquo; house in Alabama, Lance Cpl. Bryant Mitchell, 25, also appreciated Adraskan on this day of giving thanks.

&ldquo;I&rsquo;m thankful to be here, actually,&rdquo; he said. &ldquo;Just for the experience, doing something most people don&rsquo;t do.&rdquo;