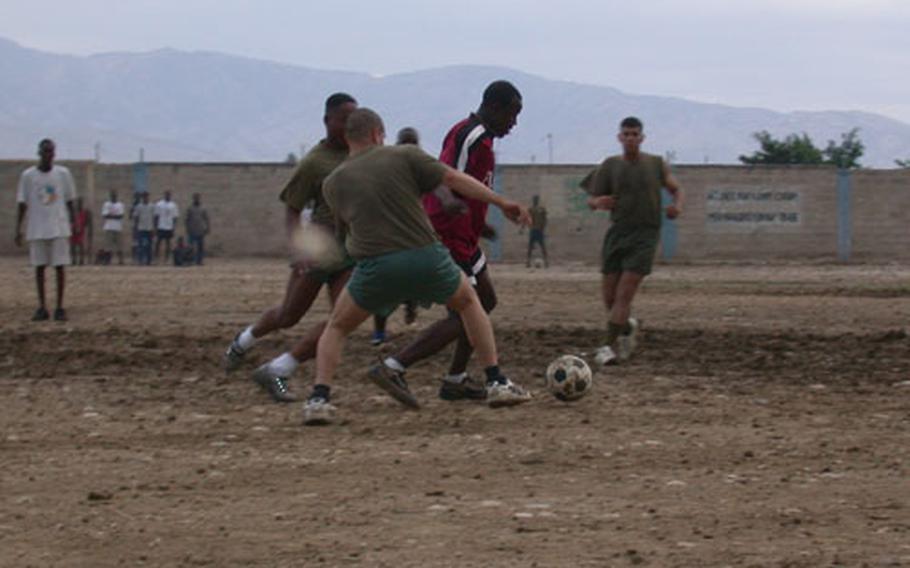 U.S. Marines from India Company, 3rd Battalion, 8th Marines battle it out on soccer field Saturday in the slums of the Cite Soleil, Port-au-Prince, Haiti. Building trust between the gangs and the Marine Corps aids the Marines in gaining the respect of the general population in the impoverished neighborhood. The game was supposed to have included Haitian National Police, but they did not show up. (Sandra Jontz / S&S)

U.S. Marines from India Company, 3rd Battalion, 8th Marines battle it out on soccer field Saturday in the slums of the Cite Soleil, Port-au-Prince, Haiti. Building trust between the gangs and the Marine Corps aids the Marines in gaining the respect of the general population in the impoverished neighborhood. The game was supposed to have included Haitian National Police, but they did not show up. (Sandra Jontz / S&S) 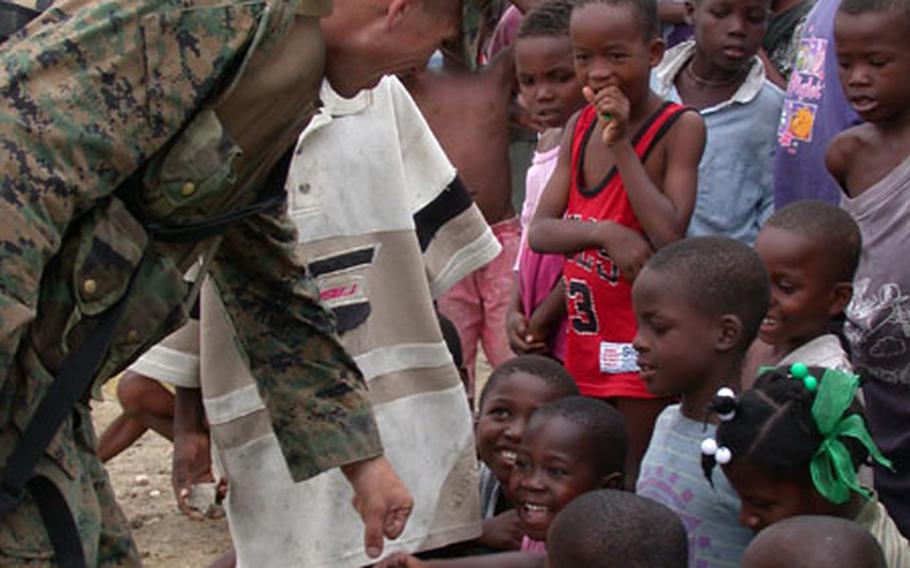 Staff Sgt. Brian Walgren says hello to the crowd of children who gathered Saturday to watch the U.S. Marines of India Company, 3rd Battalion, 8th Marines battle it out on the soccer field with gang members in the impoverished Cite Soleil neighborhood in Port-au-Prince, Haiti. Thousands of children and adults flocked to the field and cheered with each Haitian gang goal in a game in which Marines lost 4 to 1. (Sandra Jontz / S&S)

PORT-AU-PRINCE, Haiti &#8212; Thugs and warriors put down their weapons and battled it out on the soccer field Saturday under an initiative U.S. Marines anticipate will help in disarming gang members who terrorize local residents and take potshots at patrolling Marines.

Marines of India Company, 3rd Battalion, 8th Marines, launched the first of what is hoped will be a series of tournaments to bring together the three factions of tension in the Caribbean nation&#8217;s capital &#8212; the U.S. Marines, the Haitian National Policeand the gang members.

But duking it out in a friendly, albeit highly competitive, soccer game with the gang members should not be misinterpreted as lending credence and importance to the gangs&#8217; status, officials said.

&#8220;We&#8217;re trying for disarmament through cooperation,&#8221; said Lt. Zeb Beasley, India Company&#8217;s executive officer. &#8220;By entering into the spirit of cooperation, we&#8217;re not treating them like local thugs, but we&#8217;re obviously keeping close tabs on their activities. We&#8217;re developing that fragile peace, and maintaining that peace that puts an end, or stops temporarily, the bloodshed and allows us to do civil action things,&#8221; such as distributing much-needed drinking water and improving medical facilities and schools, Beasley said.

The gangs survive on extortion through intimidation, protecting and providing goods and services to those who can afford to pay up, said Sgt. Maj. Lawrence Rosenfeld, top enlisted man of the Marine Air Ground Task Force 8, or MAGTF, in Haiti. &#8220;They have no political ambition,&#8221; Lawrence said. &#8220;Just money.&#8221;

The shattered Haitian government is relying on the U.S.-led multinational task force, which includes Canada, France and Chile, to lay the foundation to rebuild the police force, which for the most part is mocked or feared by the Haitian people.

On Saturday, the Haitian police didn&#8217;t show up for the soccer match.

Their absence from Saturday&#8217;s game, which took place in the seaside slum of Cite Soleil, one of the most impoverished neighborhoods in the capital, didn&#8217;t bode well for turning around that reputation, said a disappointed Col. Mark Gurganus, MAGTF-8 commander.

Military officials are working closely with Chief of Police Leon Charles to create a legitimate police force, one that is recruiting its members from the male population of 18- to 30-year-olds.

Getting guns off the streets to bring security to Haiti is the main goal of the U.S.-led task force since the ouster of President Jean-Bertrand Aristide, who fled Feb. 29. Securing the country clears the way for a U.N. peacekeeping force, to be led by Brazil, to take over at the beginning of June.

The publicly visible cooperation between the Marines and the gang leaders doesn&#8217;t mean the military force is ignoring the gangs&#8217; criminal activity, Rosenfeld said. &#8220;Any warrants out for them will be enforced,&#8221; he said.

Marines can detain any wanted member spotted during patrols, for example, but the arresting authority is left up to the local police in an effort to bring them credibility and self-sustaining law enforcement powers.

For the most part, Saturday&#8217;s game went off without a hitch, though it brought a bit of a disappointment to the participating Marines, who lost 4 to 1. Each goal made by the Haitian players spurred loud cheers of jubilation from the several thousand spectators &#8212; children and adults &#8212; who lined the soccer field.