Marines try to build trust with Iraqis, one complaint at a time 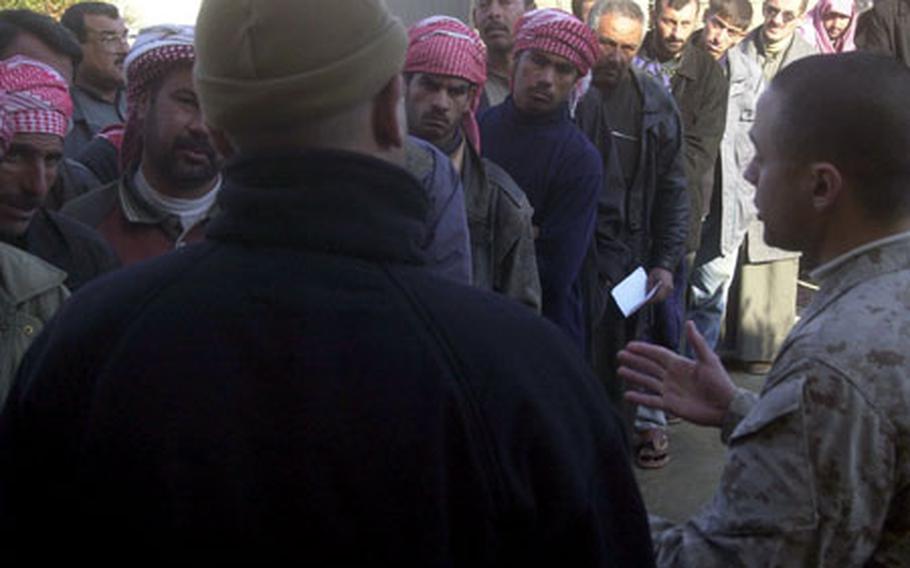 Marine Staff Sgt. Andres Quinones, right, talks with Iraqi men lined up outside the Haditha Civil Military Operations Center with the help of an interpreter. The center is open six days a week and has been seeing about 50 Iraqis a day. (Steve Mraz / S&S)

Marine Staff Sgt. Andres Quinones, right, talks with Iraqi men lined up outside the Haditha Civil Military Operations Center with the help of an interpreter. The center is open six days a week and has been seeing about 50 Iraqis a day. (Steve Mraz / S&S) 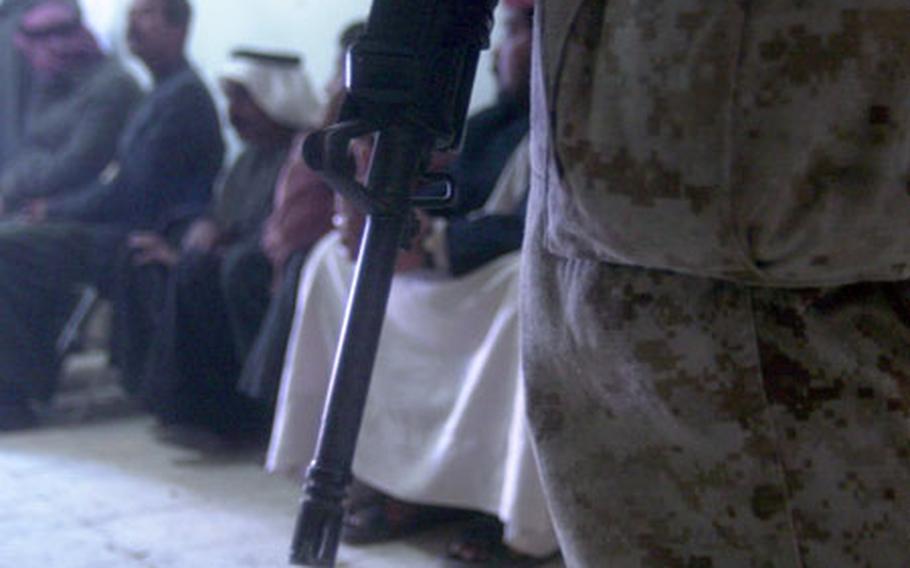 A Marine stands guard at the Civil Military Operations Center in Haditha on Sunday as locals wait to be seen. Iraqis can visit the center, which is similar to a city hall, to obtain vehicle registrations, file damage claims and discuss other concerns. (Steve Mraz / S&S)

HADITHA, Iraq &#8212; Establishing relationships and building trust with the local population is a key component of any counterinsurgency.

The Haditha Civil Military Operations Center &#8212; manned by Marines with the 4th Civil Affairs Group &#8212; performs that community outreach for Haditha&#8217;s 50,000 residents and those living in nearby Haqlaniyah and Barwanah.

&#8220;Right now, the CMOC acts like city hall for Haditha and the whole triad,&#8221; said Capt. Kirk Merritt, director of the operations center, referring to Haditha, Haqlaniyah and Barwana.

Open six days a week for roughly five hours a day, the center is where Iraqis can come to talk to Iraqi police and leaders, file damage claims, and have Marines hash out local disputes. Locals also can obtain personal identification and vehicle registration.

On Sunday, several dozen Iraqi men stood in line outside the center after being searched by Iraqi police, waiting to speak with Marines and interpreters.

Some Iraqis were trying to get permission Sunday to drive their cars around town. Vehicles were banned in the area a few months ago because insurgents were driving around, launching attacks against Marines and then fleeing.

Since the traffic ban, attacks have slowed. The operations center is beginning to issue residents vehicle registration stickers so they can drive again.

Marines also communicate with local ministers to work out issues on food, fuel, power and water. A few weeks ago, an issue arose with the area&#8217;s water treatment plant. To supply water to the triad, power had to be cut off to one neighborhood.

The civil affairs mission in Iraq is not the most important aspect of the overall effort, but it&#8217;s a huge step toward the goal here, said Marine Staff Sgt. Andres Quiniones, 29, of Golden, Colo.