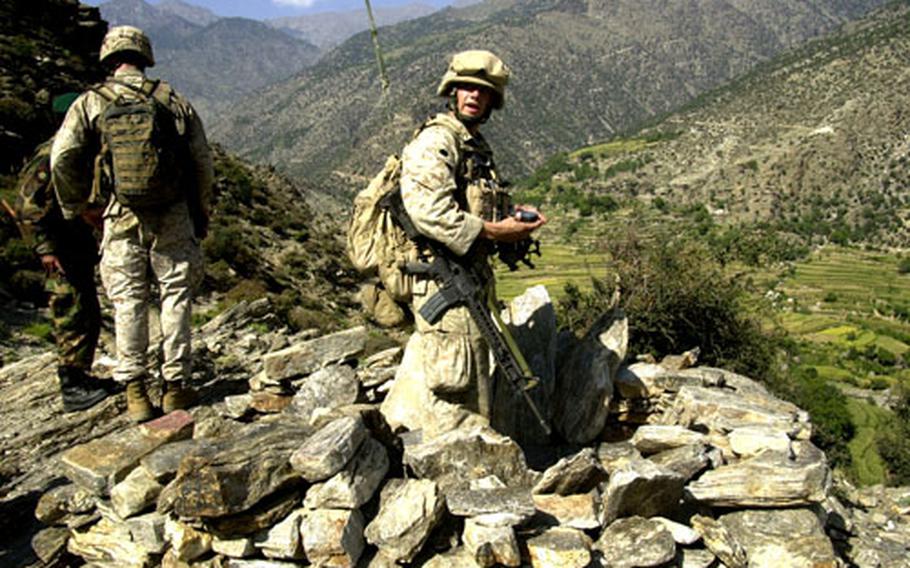 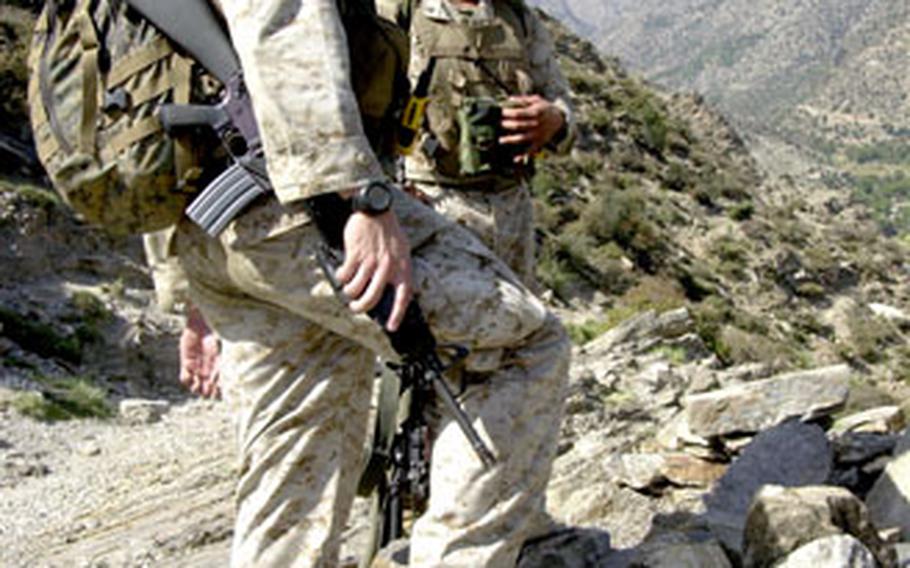 QATAR KALA, Afghanistan &#8212; Four Afghan men were spotted ascending a mountain trail Thursday in eastern Afghanistan&#8217;s Watapoor Valley. It looked as if they had tried to discreetly sling AK-47s around their backs.

When the Marines with the 3rd Platoon, Company E, 2nd Battalion of the 3rd Marine Regiment, 3rd Marine Division out of Kaneohe Bay, Hawaii, saw them, they began climbing toward the mountain trail in pursuit.

The Marines trudged up the mountain under the noonday sun, strapped with enough fire power to take care of the four men and whatever else might arise.

When they arrived at the place where they had last spotted the men from the valley, no one was around. But a fortified fighting position had been pulled together at the site &#8212; a ramshackle stone defense the Marines kicked over before leaving.

Earlier, on Wednesday night, the Marines camped in a harvested cornfield in Watapoor Valley. During a mile-long uphill hike that afternoon, they passed through several villages but did not make contact with enemy forces.

After a quiet evening, Marines were back on the trail, hiking to the village of Qatar Kala. First Lt. Nick Guyton, the 3rd Platoon&#8217;s commander, met with village elders there early Thursday morning, asking them about the health, safety and welfare of the residents with winter on its way.

School officials in the village asked for desks and chairs for the students, who are currently sitting on the floor at school.

On the issue of safety, villagers said they live in a very peaceful place and no Taliban were in the area. However, Kunar province has been a hotbed of enemy activity in recent weeks with four Marines injured in a roadside bomb blast and another Marine killed in a mortar attack.

Villagers served tea and candies to Guyton and media accompanying the platoon. The elders themselves refrained from eating or drinking in accordance with the Muslim holy month of Ramadan, which began Monday. From sunup to sundown, Muslims cannot eat or drink during October.

Guyton reassured the villagers of the Marines&#8217; desire to provide assistance.

Third Platoon Marines gave an upbeat assessment of their role.

&#8220;The amount of forces we have and working along with the Afghan National Army gives a positive impression to the local population.&#8221;