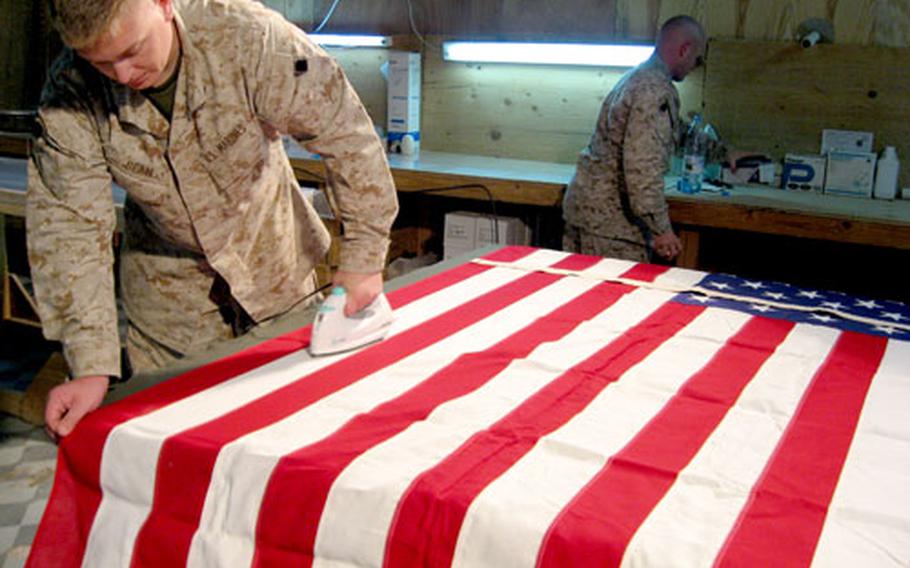 Lance Cpl. Jesse Beam, of Newport News, Va., irons a flag that will be placed over a transfer case carrying a deceased troop during a flight back to the United States. Beam is assigned to Personnel Retrieval and Processing Detachment, 1st Marines Logistics Group at Camp Taqaddum, Iraq. (Charlie Coon / S&S)

He is a dead troop, killed in action. Camp Taqaddum, a sprawling and well-guarded base in Anbar province, is his temporary home. The folks back in the States likely don&#8217;t know yet of his death, but they&#8217;d want to know that he is being handled with care.

&#8220;I look at it as a very respectful job,&#8221; said Lance Cpl. Thomas Sweet of Baltimore, of the base&#8217;s Personnel Retrieval and Processing Detachment, or PRP.

Sweet, 22, is one of 35 Marine reservists whose job is to make sure that dead troops, or their body parts, are handled quickly and with dignity, and prepared for delivery to Port Mortuary in Dover, Del.

Sometimes, though, the body isn&#8217;t delivered to the base. The PRP unit has to go out and get it. One of the tools they use is a circular saw that cuts through armor, like that on a Humvee struck by a roadside bomb.

Camp Taqaddum, located between Fallujah and Ramadi, is, unfortunately, an ideal location from which to retrieve and process dead personnel. Since February, the unit has processed 415 bodies or partial bodies.

Of those, 247 were U.S. servicemembers. The others were members of the Iraqi army and police, third-country nationals, insurgents, or civilians caught in the crossfire.

Bodies are handled in a businesslike way, inside a former airplane hangar. Only the Marines and their commander, Navy Lt. Chadwick Ray, are allowed in the processing room with the body.

Once in the hangar, Marines lift the body onto an examination table. An anatomic chart is prepared that details the body&#8217;s condition, including wounds and identifiers such as tattoos.

A Marine sweeps the body with a metal detector in search of shrapnel and bullets.

In the case of servicemembers, the helmet, vest and other protective gear are left on the body if possible, Ray said. The people at Dover use it to analyze the deadly event, and maybe learn from it.

The Marines try not to become personally involved with the deceased or his personal effects, such as photographs. Professional detachment, they call it.

The body is not formally identified here; instead a form states the deceased &#8220;is believed to be&#8230;.&#8221; Formal identification is made in Dover, using fingerprints and DNA.

The dead troop, personal effects and paperwork are put into a transfer case, a coffin-shaped metal box that is packed with 40 pounds of ice to delay decomposition. A meticulously ironed 5-by-9&#189;-foot U.S. flag, with any loose threads removed, is secured over it. The transfer case is then placed inside a refrigerated room until the plane arrives.

Almost always, Ray said, the body is flown from Camp Taqaddum within 24 hours to Kuwait, and then to Ramstein Air Base, Germany, where fresh ice is placed inside the case for the flight to Dover.

When it&#8217;s time to go, the transfer case is driven discreetly in a panel van to the back of a waiting C-130 cargo plane on the air strip at Camp Taqaddum. Like pall bearers, the Marines carry the case inside the plane, turning it around so the feet are facing the back of the plane.

The crew disembarks and lines up with the aircrew on either side of the plane&#8217;s ramp. It gives Marines including Cpl. Nicholas Moody a moment to reflect, before the pilot or whoever is in charge commands, &#8220;detail, dismissed.&#8221;