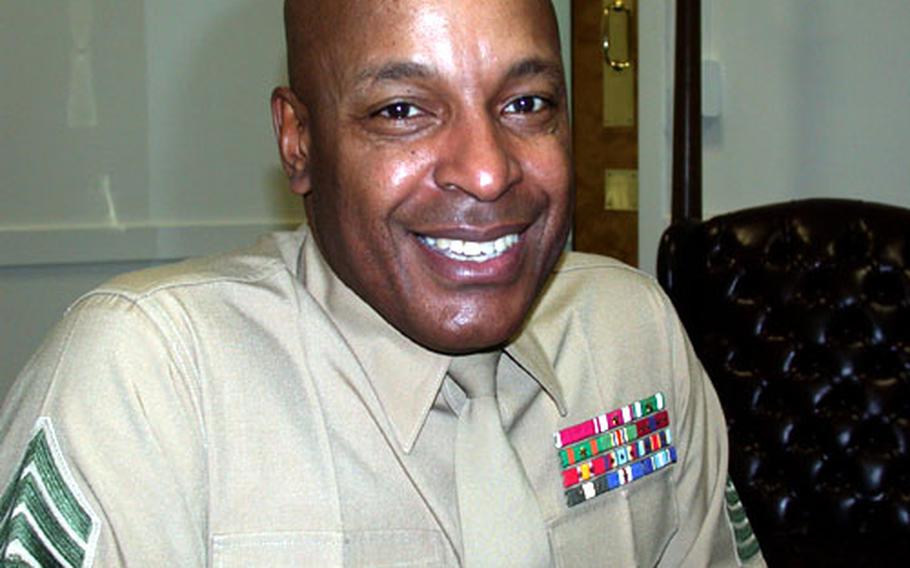 ARLINGTON, Va. &#8212; Sgt. Maj. Alford McMichael has made an about-face. The top enlisted man of the Marine Corps isn&#8217;t retiring after all.

This summer, McMichael is moving to Brussels, Belgium, and will again work for Gen. James Jones, commander of the U.S. European Command and NATO&#8217;s Supreme Allied Commander &#8212; this time in the newly created job of senior enlisted adviser to NATO, creating noncommissioned officer training programs for allied nations without one, he told Stars and Stripes on Tuesday in an exclusive interview.

McMichael, 51, will leave his current job June 26. It has not been decided yet when he&#8217;ll start his new job, billeted for 36 months, though the orders he received last week say his start date will be no later than July 31.

&#8220;Gen. Jones and Gen. [Michael] Hagee, our commandant, both agreed this would be a great thing for our country,&#8221; McMichael said. &#8220;What we want to do is help create the NCO corps, especially in the new countries that are coming into the NATO league &#8230; helping them create that form of training &#8230; [and] helping them establish that form of NCO corps within their military.&#8221;

&#8220;I think the biggest challenge will be to tear down the walls that have been there longer than my presence, and to get people to see the value of what we&#8217;re trying to bring to the table, of an NCO corps that it will not threaten the commissioned corps, it can only strengthen the organization.&#8221;

McMichael, who has served under three commandants, would not say if Jones handpicked him for the job or if anyone else had been considered. Jones is traveling and was not available for comment.

Jones has the right guy for the mission, Hagee said.

&#8220;When Gen. Jones explained his concept to help some of the new NATO countries in developing a professional NCO corps, I knew Sgt. Maj. McMichael&#8217;s leadership, professionalism and experience made him the ideal choice,&#8221; Hagee said. &#8220;He&#8217;s a tremendous sergeant major, a role model and contributed much to our Corps. This billet will allow him to continue to serve the country he loves so much.&#8221;

The creation of this new NATO job falls in line with shifts Jones, the Corps&#8217; former commandant, has tossed out since assuming his new role in mid-January.

&#8220;I would say this is Gen. Jones&#8217; vision to help these countries understand the effectives of NCOs and senior NCOs in the armed forces of America and how they can benefit their staff, which I think would be a great undertaking to go and try to instill a new culture, not only in a country, but also in a military that is basically foreign to this process,&#8221; McMichael said.

He speaks no language other than English, but plans to learn, he said. He&#8217;ll likely tackle Danish first (since he studied it while stationed at the American Embassy in Denmark) followed by French, which is heavily spoken in Brussels. His wife, Rita, is excited about the new life they&#8217;ll lead, he said.

McMichael said he isn&#8217;t concerned that he has no predecessor from whom to learn. Being the first isn&#8217;t new for the soft-spoken career Marine who enlisted Aug. 27, 1970.

Rarely does THE sergeant major of the Corps continue his military career upon leaving the post.