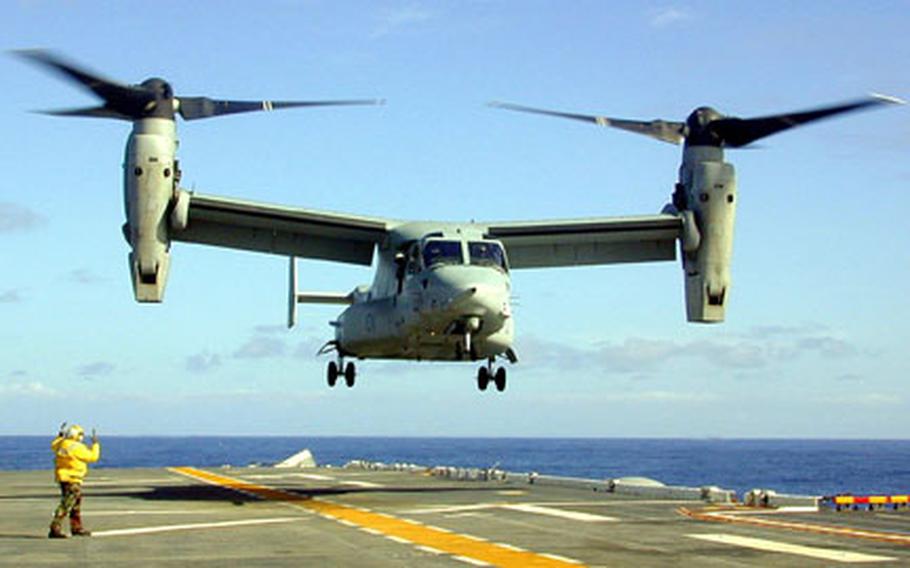 WASHINGTON &#8212; The Marines will deploy a squadron of MV-22 Osprey aircraft into Iraq in September, the first combat mission for the troubled helicopter-airplane hybrid.

Service officials said Friday the Ospreys will give commanders in Iraq more flexibility in missions, since it can fly further and faster than the CH-46 Sea Knight helicopters in use, and provide better protection for Marines traveling throughout the combat zone.

Castellaw said the aircraft can carry 24 Marines in full battle gear and will be used in a variety of missions, but mostly to fly Marines in and out of direct combat.

The aircraft has been under development by the Pentagon for more than 20 years. It can take off and land vertically, like a helicopter, but can also tilt its wing-mounted rotors forward to cruise like a fixed-wing airplane.

In 2000, 23 Marines were killed in test flights of the aircraft, and as recently as February most of the Corps&#8217; fleet was grounded for several weeks because of software glitches.

Corps Commandant Gen. James Conway acknowledged those setbacks during Friday&#8217;s deployment announcement, but said the &#8220;quantum leap in technology that this aircraft will bring to the fight&#8221; will prove invaluable to Marines in Iraq.

Castellaw said the Osprey has been tested in desert conditions, and the squad deploying has extensive training for the complications sand and dust may create.

He also said software, hydraulics and training improvements over the last few years have made the Osprey a safer choice for combat than the CH-46s.

The hybrid is quieter in flight than the helicopters, giving enemies less advance warning, and is less vulnerable to heat-seeking missiles because its infrared signature is lower, he said. It also flies faster and higher than the CH-46s.

Castellaw said he has already received requests to deploy the Osprey to support missions in Afghanistan, the Horn of Africa and throughout the Pacific, but no decisions have been made on if or when those areas will see the aircraft.