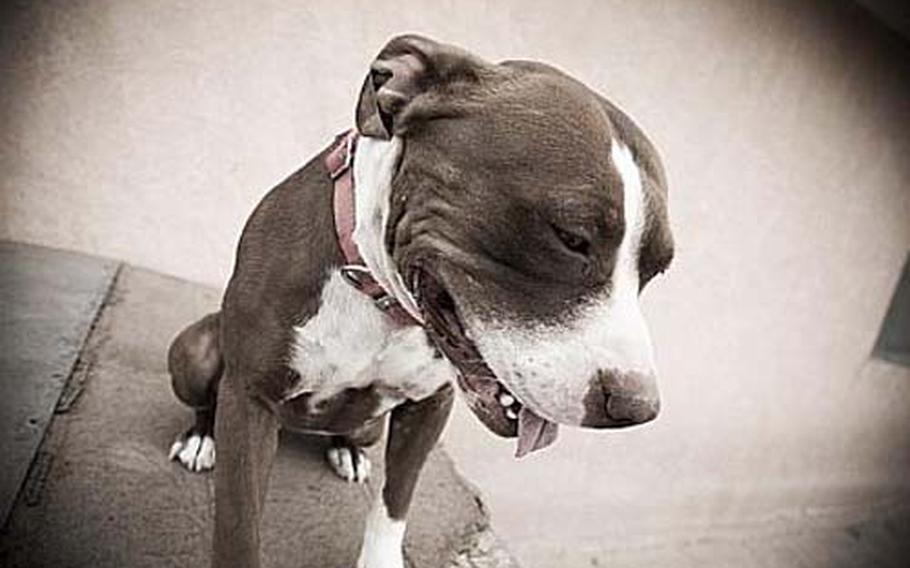 Each year, dogs bite 4.7 million Americans, according to Gail Hayes, a spokeswoman for the U.S. Centers for Disease Control and Prevention. On average, 386,000 of those bitten go to the emergency room. About 16 people die, according to the CDC. The CDC does not keep statistical data on bites by breeds, Hayes said. (Stock photo)

In August, a pit bull mix at Yokota Air Base in Japan climbed out of its enclosure at the base kennel, killed one dog and wounded another.

Now, the Marine Corps has issued the first worldwide policy banning pit bulls, Rottweilers, wolf hybrids and any dogs with "dominant traits of aggression" from all U.S. Marine Corps bases and housing facilities.

The policy, issued in August, allows Marines and families currently living in base housing to keep their pets if they apply for a waiver by Oct. 10 and if their dogs pass a behavior test. That waiver will last only as long as the family remains at the same base or until Sept. 30, 2012, at which time all Marine housing and Marine-controlled housing should be free of any full or mixed breeds considered pit bulls, Rottweilers and wolf hybrids, according to the policy.

It can also be a terrifying one, some say.

"It&#8217;s pretty horrifying to see the jaws of one of these dogs ripping into you," said Colleen Lynn, who was attacked by a pit bull two years ago and now runs a Web site, www.dogsbite.org, dedicated to tracking attacks. "It never goes away."

Marines living on a base where another service controls housing will continue to follow that base&#8217;s rules. On Okinawa, where housing for all services is controlled by the Air Force, Marines may keep their dogs in family housing, at least for now, 18th Air Wing spokesman Ed Gulick said last week. The base is reviewing the policy, however.

Tiffany Jackson works for Marine Corps Community Services on Okinawa and volunteers with the Okinawan American Animal Rescue Society, a series of foster homes for abandoned pets in the military community there.

Currently the network is caring for 30 dogs and 30 cats. Jackson is the only one who will take pit bulls.

She can care for three abandoned pit bulls at a time, and her house is currently full. Many dogs she sees had owners who wanted the dog as a token rather than a pet. That neglect, she says, leaves both their bodies and their temperament in need of much care.

Even though the ban might not affect Okinawa Marines, Jackson and her fellow volunteers are worried about a wave of abandoned dogs as news of the policy spreads. When asked what the Marine Corps is doing to discourage abandoned dogs, a Marine spokesman said that would be up to each base commander.

Policies and changesMARINESUnder the Marines&#8217; rules, anyone seeking family housing after Aug. 11 may not house a Rottweiler, pit bull or wolf hybrid with them, according to a Marines spokesman. Anyone in family housing before Aug. 11 with those dogs must apply for a waiver by Oct. 10.

The dog then must pass a "nationally recognized temperament test" by a certified tester at the owner&#8217;s expense, the policy states. The waiver must be approved by base commanders.

Owners of banned dogs will still be able to bring their pets on base for veterinary care, the policy states.

The ban covers mixed breeds, and it will be up to a military or civilian veterinarian to determine classification if registry papers do not exist, according the Marine spokesman. Installation commanders may ask for a basewide exemption from the policy, though that had not happened as of the middle of last week, the spokesman said.

ARMYEarly this year, the Army endorsed a similar dog ban at its privately run housing facilities, according to William Costlow, a spokesman for U.S. Army Installation Management Command.

NAVYThe Navy&#8217;s policy allows that certain breeds may be prohibited, though local commanders have jurisdiction, according to Navy spokeswoman Rachelle Logan.

AIR FORCEThe Air Force allows each base commander to decide on the issue, and some have banned the same breeds, according to Air Force spokesman Gary Strasburg.

The temperament testThe Marine Corps&#8217; policy says waivers to keep pit bulls, Rottweilers or wolf hybrids in family housing will be given only to dogs that pass a temperament test, such as the American Kennel Club&#8217;s Canine Good Citizen test and the Delta Society&#8217;s Delta Test.