Marines taking over for Army in Iraq 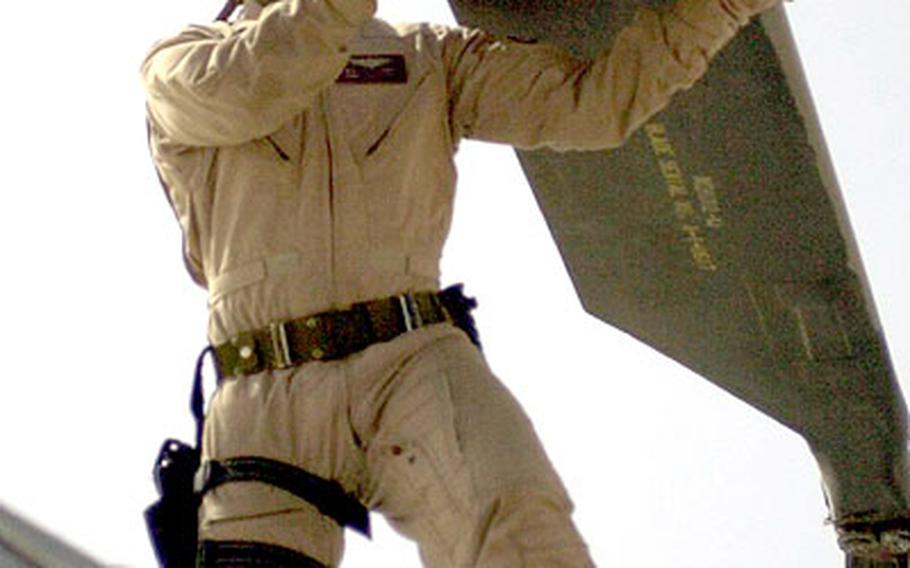 Marine Staff Sgt. Marvin Clark secures the front rotor of a CH-46 "Frog" helicopter from the New River, N.C.-based Marine Medium Helicopter Squadron 261 at Al-Asad Airfield, about 110 miles from Baghdad. About 25,000 Marines are streaming into western Iraq to take command of security and rebuilding duties from the Army. (Scott Schonauer / S&S)

Marine Staff Sgt. Marvin Clark secures the front rotor of a CH-46 "Frog" helicopter from the New River, N.C.-based Marine Medium Helicopter Squadron 261 at Al-Asad Airfield, about 110 miles from Baghdad. About 25,000 Marines are streaming into western Iraq to take command of security and rebuilding duties from the Army. (Scott Schonauer / S&S) 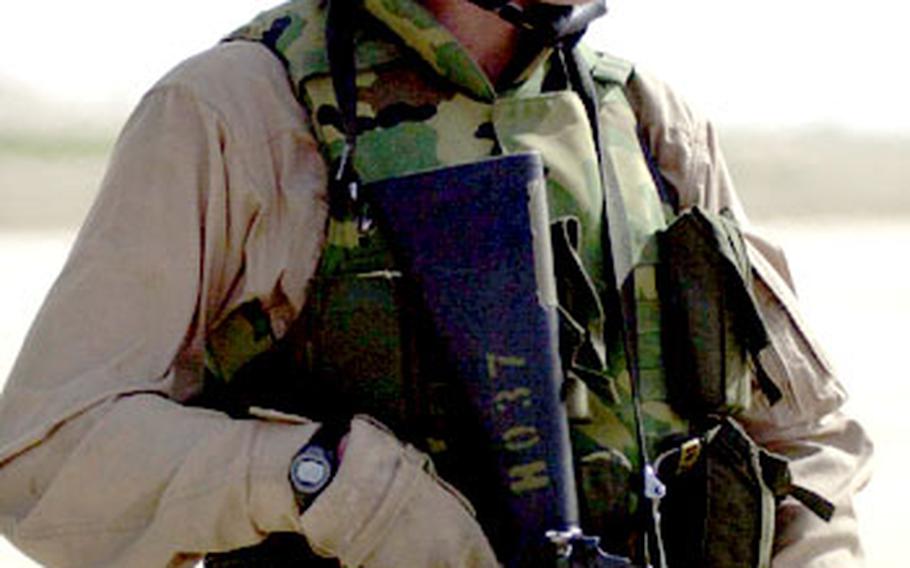 A Marine guards a CH-46 "Frog" helicopter as crewmembers refuel the aircraft at Tallil air base in southern Iraq. (Scott Schonauer / S&S) 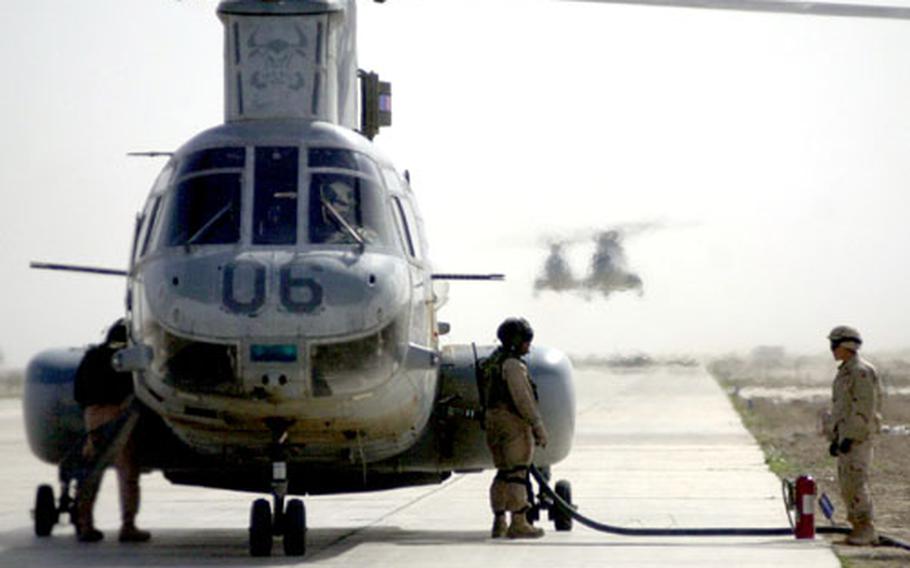 Marine crewmembers refuel a CH-46 as it makes a pit stop at Tallil Air Base. (Scott Schonauer / S&S) 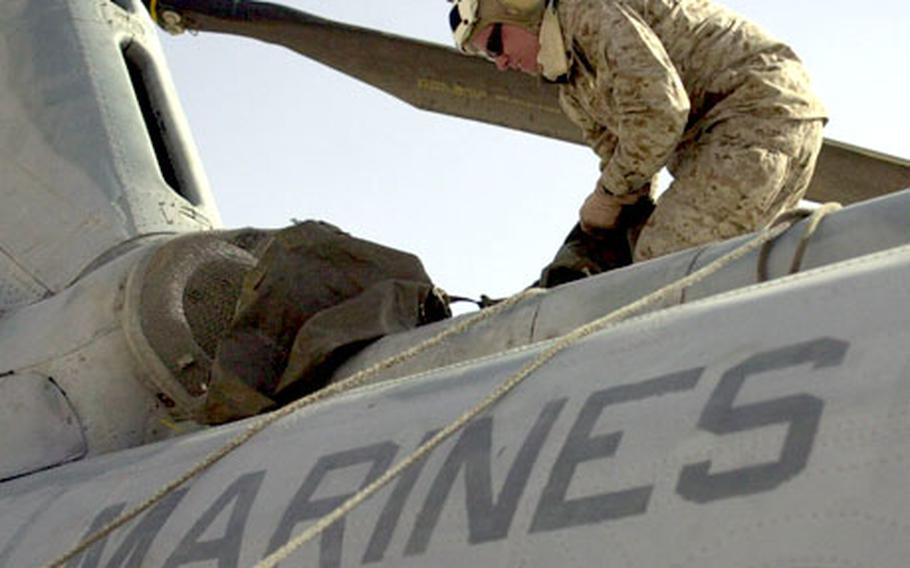 A Marine prepares to secure a CH-46 helicopter at Al Asad Airfield, about 110 miles from Baghdad. (Scott Schonauer / S&S) 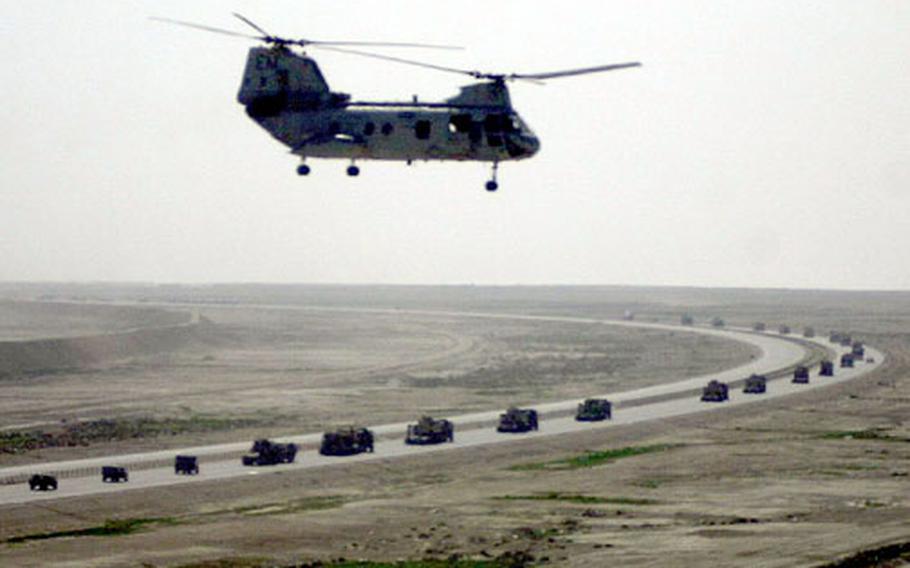 AL-ASAD AIR BASE, Iraq &#8212; Once they crossed the Kuwaiti border into Iraq, the Marine helicopters flew so low over the desert that their wake ruffled tents and scared livestock.

A goat herder saw the dual- rotor CH-46s approach from the south and gave a long, slow wave.

The gesture surprised the pilots and crew, who braced for bullets instead of a friendly welcome.

Not everyone in Iraq is going to be that accepting, and Marine pilots know it.

About 25,000 Marines are streaming into western Iraq to take over security and rebuilding duties from the Army. Members of Marine Medium Helicopter Squadron 261 and Marine Light Attack Helicopter Squadron 167 are the first Marine aviation units to arrive at Al-Asad Air Base.

While some Marines rotating into Iraq helped topple Saddam Hussein&#8217;s regime last year, most with the New River, N.C.-based Squadron 261, nicknamed the &#8220;Raging Bulls,&#8221; have never been to Iraq, let alone on a real mission.

Some pilots and crewmembers have fewer than five years of flight time in the CH-46 and weren&#8217;t even born when the CH-47 was first introduced to the military 30 years ago.

The Marines have trained for months for this moment.

Many heading to the Middle East practiced in the arid region of Yuma, Ariz., with simulated surface-to-air missiles.

&#8220;We&#8217;re all pretty much eager to do our jobs,&#8221; said Staff Sgt. Marvin Clark, who also read &#8220;Lawrence of Arabia&#8221; several times before the Marines launched off the amphibious assault ship USS Bataan on Friday for a dusty staging base in Kuwait.

The main mission of &#8220;the Bulls&#8221; will be to supply Marines at smaller bases scattered throughout the region and transport casualties to medical teams. Part of the area they will operate in is the menacing city of Fallujah, where insurgents have shot down at least three other Army helicopters.

The Marine squadrons have upgraded defensive equipment and implemented different tactics to counter possible attacks. But that doesn&#8217;t mean the pilots and crewmembers do not think about the risks.

The squadrons have a ton of work ahead before they take over for the Army aviators, who have been in Iraq for months.

First, they need to learn the lay of the land. While Marines and soldiers have conflicting philosophies on how to go about the same missions, squadrons from both services have planned to meet this week to exchange tips and tactics.

There is plenty to learn, but the Marines aim to fly real missions in about a week, said Lt. Mike Belding, the squadron commander.

And the coming days will serve as a real test for many in the unit, especially the junior pilots and crewmembers.

&#8220;When we leave here, the young guys will be better than their peer group because of the experiences they will have,&#8221; Belding said.