Marines take to talk radio to talk about Marines 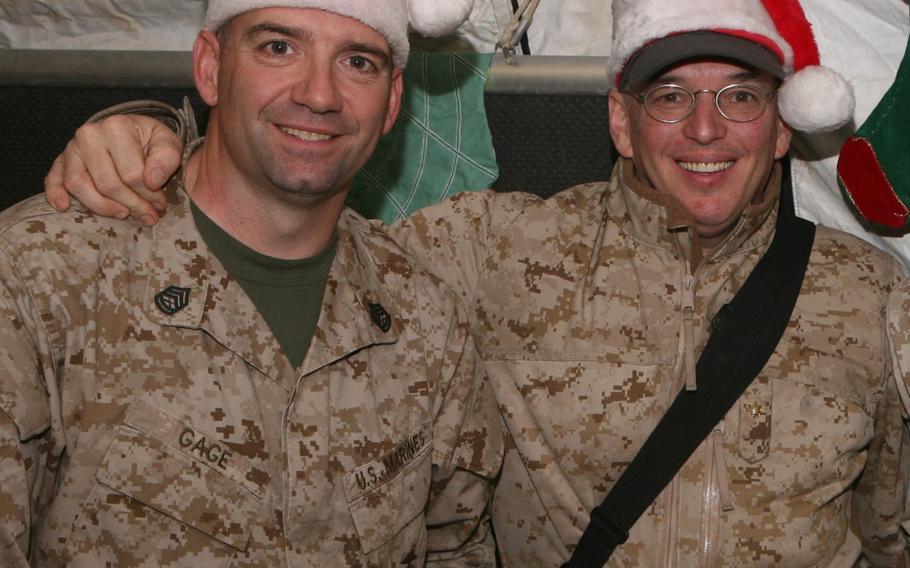 Paul Gage, left, stands next to Mike McNamara during a Christmas party in Afghanistan in 2010. Gage and McNamara are creating a streaming talk radio show hoping to engage listeners and callers in the Marines' culture and reconnect isolated Marines with their "tribe." (Photo courtesy Mike McNamara)

Once a Marine, always a Marine, says retired Marine Maj. Mike “Mac” McNamara. The warrior mystique, the pride, the humor, once drilled in, endures, he says, no matter where life leads.

“We love ourselves,” McNamara said. “We believe our organization is the best. We don’t flinch from that.”

But the few and the proud also fall prey to not uncommon afflictions — drinking, drugs, broken relationships, domestic violence, isolation and suicide.

Both the love of the corps and the problems that nonetheless can beset its “tribe,” as McNamara calls it, will be the pillars of his new enterprise: a daily, four-hour talk-radio show.

Starting June 1, All Marine Radio (allmarineradio.com) will be the first streaming radio show about all things Marine Corps, McNamara said.

McNamara, who in civilian life has worked as a broadcaster in North Dakota, came up with the idea along with retired Master Sgt. Paul Gage. The two, who both served more than 20 years, met in Helmand province, Afghanistan, in 2010 and have been buddies ever since. McNamara is the talent. Gage and his wife, Danielle, are in charge of marketing and are pursuing a variety of funders.

Another battle buddy, Gen. Robert Neller, commandant of the Marine Corps, is expected to be the first guest. That interview will be taped, as will another planned with retired Marine Corps Gen. John Allen, former commander of international and U.S. forces in Afghanistan. Allen is also a battle buddy; the Marine Corps, after all, is a small place. But other interviews will be live, and guests will be able to respond to listeners who submit questions via phone, text message or email.

McNamara wants to inspire as well as inform his listeners. He’s hoping for guests like Sarah Rudder, a Marine who lost a leg to an injury suffered while helping remove human remains from the Pentagon two days after the 9-11 attack, and won seven medals at the recent Invictus Games. And Charlie Linville, a Marine who lost a leg to a bomb blast in Afghanistan in 2012 and recently climbed to the top of Mt. Everest.

“The mission is post-combat-related mental health,” McNamara said. “To get Marines to reconnect to our tribe so that they don’t go down that road to isolation and suicide, to give them a place where they can connect on a daily basis to their culture.”

Sound uncharacteristically touchy-feely? No. “We’ll do it in a very Marine way,” McNamara said. “What we’ll do is tell stories about our culture.”

The first hour will be McNamara’s take on the Marine news of the day, followed by a guest or battle buddy, followed by discussion of a current or former Marine in the news, McNamara said. The fourth hour might be freewheeling, he said. In any event, there’s little likelihood of dead air. “Mac doesn’t shut up,” Gage said.

McNamara is still wrestling with how to make the show feel like home to macho, profane and politically incorrect Marines while also reaching their spouses — and keeping general officers keen to appear on the program.

McNamara admits to what some might consider pulling a punch regarding Allen’s friendship with Tampa socialite Jill Kelley. The two shared thousands of emails while Allen was at the Central Command and then top commander in Afghanistan. A 2013 Defense Department investigation cleared Allen, now a senior fellow at the Brookings Institution, of any wrongdoing.

McNamara said, “We don’t care about that. We want to talk about Marines stuff, Afghanistan stuff.”