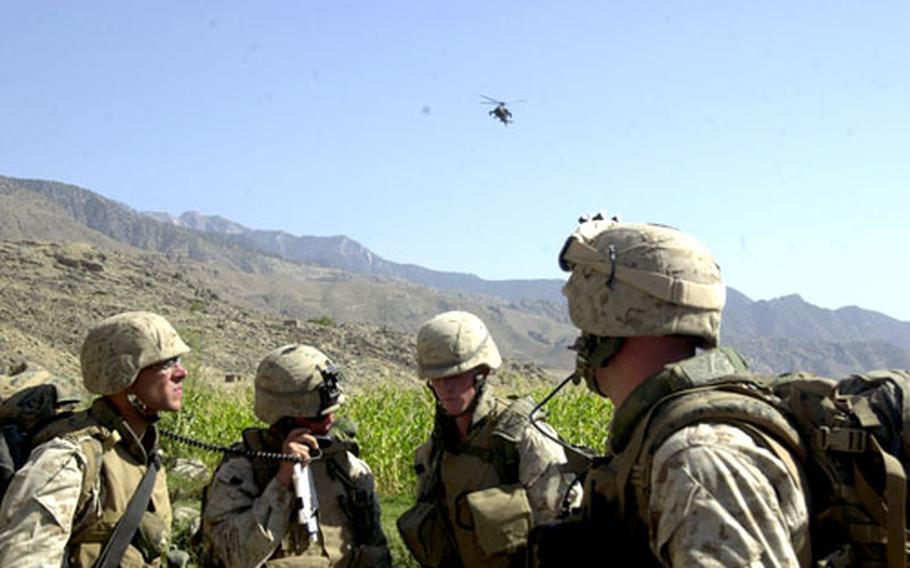 U.S. Marines with Company F, 2nd Battalion, 3rd Marine Regiment, 3rd Marine Division, out of Hawaii, speak with Apache helicopter pilots Thursday shortly after the Marines were attacked in eastern Afghanistan’s Laghman province. The mortar sailed past the Marines’ position, and no one was injured. (Steve Mraz / S&S)

U.S. Marines with Company F, 2nd Battalion, 3rd Marine Regiment, 3rd Marine Division, out of Hawaii, speak with Apache helicopter pilots Thursday shortly after the Marines were attacked in eastern Afghanistan’s Laghman province. The mortar sailed past the Marines’ position, and no one was injured. (Steve Mraz / S&S) 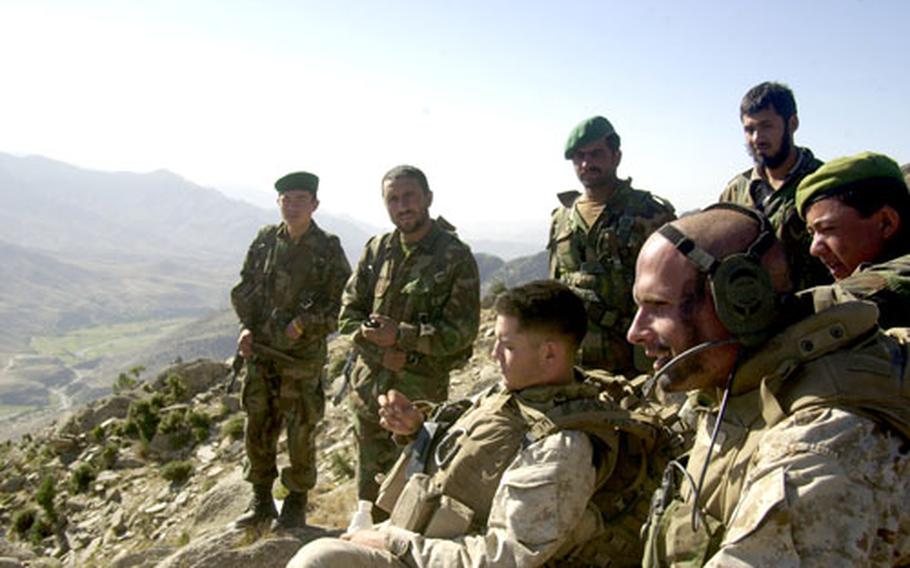 An instant later, U.S. Marines with Company F, 2nd Battalion, 3rd Marine Regiment, 3rd Marine Division out of Kaneohe Bay, Hawaii, palmed the earth behind dug-in positions as an enemy mortar sailed past and exploded well beyond their patrol base in eastern Afghanistan&#8217;s Laghman province.

The enemy had succeeded in getting the Marines&#8217; attention in the brief Thursday afternoon attack. Now, the Marines were coming for them.

Minutes later, the Marines launched seven 81-millimeter mortar rounds at the mountain where the enemy was thought to have fired from. The shells peppered the peak, but that would not be the only Marine imprint left on the slope.

Prior to the mortar attack, Marines with Company F&#8217;s weapons light platoon planned to hike up an adjacent mountain on the other side of the Alishang Valley, hoping to encounter the enemy. Now, the enemy revealed its presence from a peak where they had fired previously on Marines.

First Lt. Ryan Cohen, weapons light platoon commander, altered plans and decided to hike up the mountain from where the enemy attack came.

A pair of Apache helicopters appeared over head as the Marine and Afghan National Army convoy left its patrol base. With protection from above, the convoy made its way to the foot of the ridge where the mortars rang from. Marines shouldered their packs. Everyone began the long march.

For four hours, Marines broiled in the afternoon sun and ascended the bouldered ridge that split the Alishang and Gonapal valleys. By nightfall, weapons light platoon had humped between six and eight kilometers and climbed about 3,500 vertical feet. The men camped Thursday night just below the mountain peak, and the evening passed without major incident.

At 7 a.m. Friday, Marines were diving again as Cohen sounded the call of &#8220;incoming.&#8221; But, it was determined that the shells were fired from a distant mountain at an even more distant target. Another enemy mortar fired at the same far-off target pierced the morning calm at 7:15 a.m.

The Marines were back on the trail shortly thereafter, and reached a 6,300-foot peak by about 8:30 a.m. The spot offered sweeping vistas of several valleys and villages. But a nearby 7,000-foot peak where the enemy was believed to have launched its Thursday afternoon mortar attack still had to be reached.

If the Marines were to make contact with the enemy, this would have been a likely place. Afghan troops and weapons light platoon&#8217;s 3rd squad scrambled up the steep slope and found the 7,000-foot high peak deserted.

With no enemy fighters around Friday morning, it became more apparent than ever that the rebels had performed their standard inaccurate shoot-and-scoot attack with Thursday&#8217;s mortar.

But several fortified fighting positions were scattered about the mountain top. It was apparent the strategic overlook had been used by the enemy.

The squad then returned to the 6,300-foot mountain top to regroup with the rest of the Marines.

When you push into high terrain, you must eventually push out of it.

Around 1 p.m., Afghan troops led the way down the steep, rocky and unstable front face of the 6,300-foot mountain. The contingent of Marines cautiously made its way down, stepping from rock to rock as their legs burned from the strain. Shortly after 4 p.m., all the Marines had descended the steep mountain face, cruised through an Afghan village and walked through agricultural fields.

They had made it back to the patrol base, tired but intact.

With unbridled intensity, Cohen, the weapons light platoon commander, congratulated the Marines on their tenacity.