Marines struggle to convince Afghans that they won't abandon them 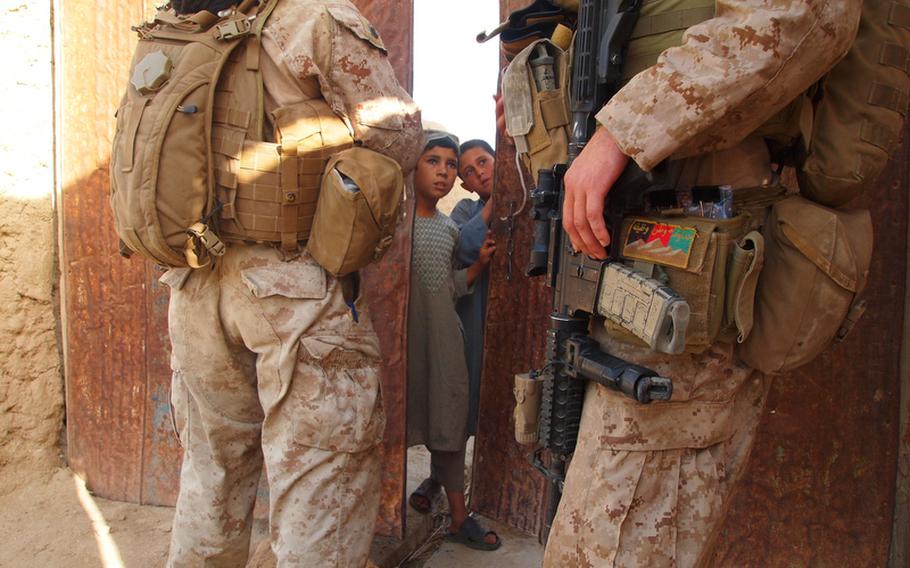 Buy Photo
Marine Sgt. Randy Williamson, right, a squad leader from Stroudsburg, Pa., and an interpreter talk to some young boys early in the morning on May 27 while trying to find an English-speaking shopkeeper they know lives in the area. Williamson is the leader of 1st Squad, 3rd Platoon, Company I, 3rd Battalion, 2nd Marine Regiment. (Matt Millham/Stars and Stripes)

Buy Photo
Marine Sgt. Randy Williamson, right, a squad leader from Stroudsburg, Pa., and an interpreter talk to some young boys early in the morning on May 27 while trying to find an English-speaking shopkeeper they know lives in the area. Williamson is the leader of 1st Squad, 3rd Platoon, Company I, 3rd Battalion, 2nd Marine Regiment. (Matt Millham/Stars and Stripes) 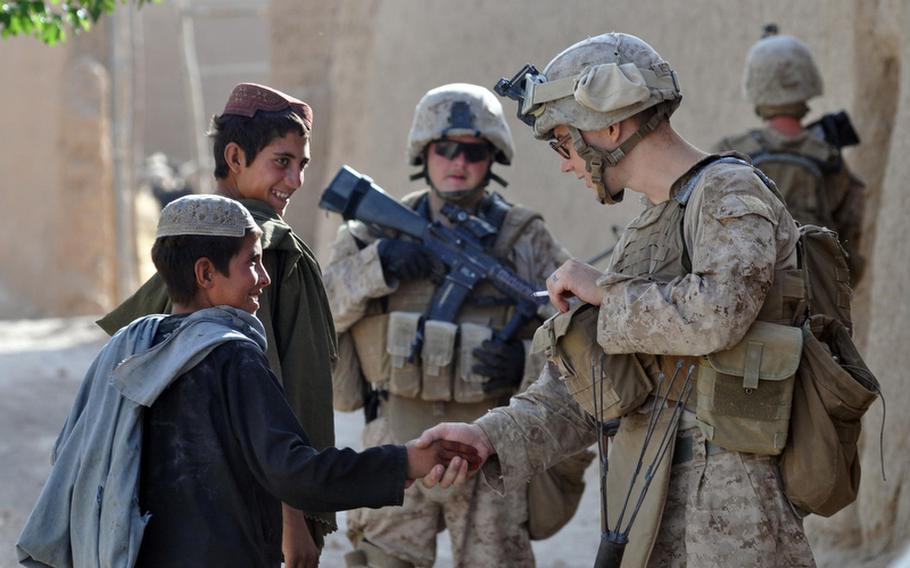 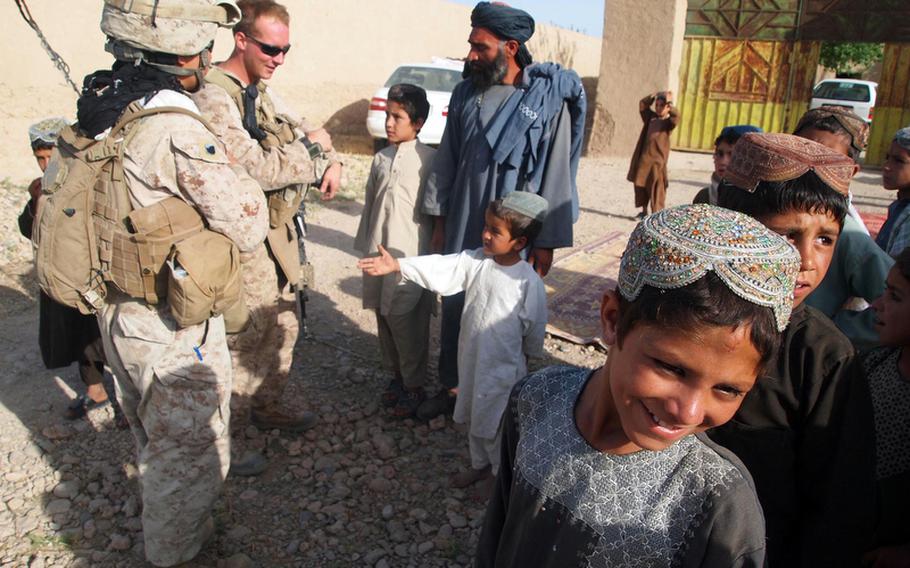 Buy Photo
A small boy extends his hand to Marine Sgt. Randy Williamson, a team leader from Stroudsburg, Pa., as he chats with a groom before his wedding in a small village north of Musa Qala&#39;s district center. The Marines conduct regular patrols to deter Taliban activity, to give a sense of security to the locals, and to build the population&#39;s trust in the Marines, who are engaged in a fierce contest with insurgents for the hearts and minds of the people. (Matt Millham/Stars and Stripes) 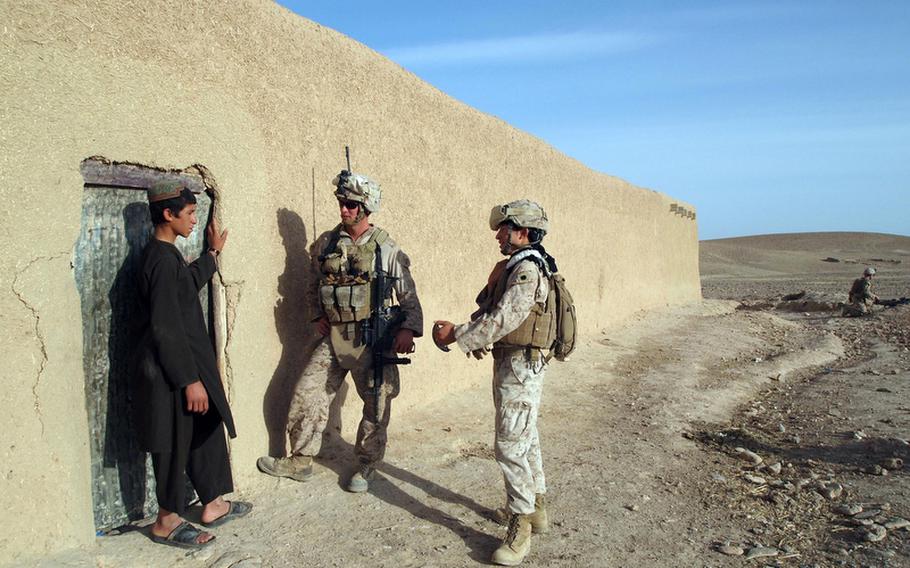 Buy Photo
Marine Sgt. Randy Williamson and an interpreter speak with the son of a local mullah with whom the Marines have forged a relationship. The mullah, however, was out for the morning, and the Marines continued their early morning patrol in search of other locals to talk with. (Matt Millham/Stars and Stripes) 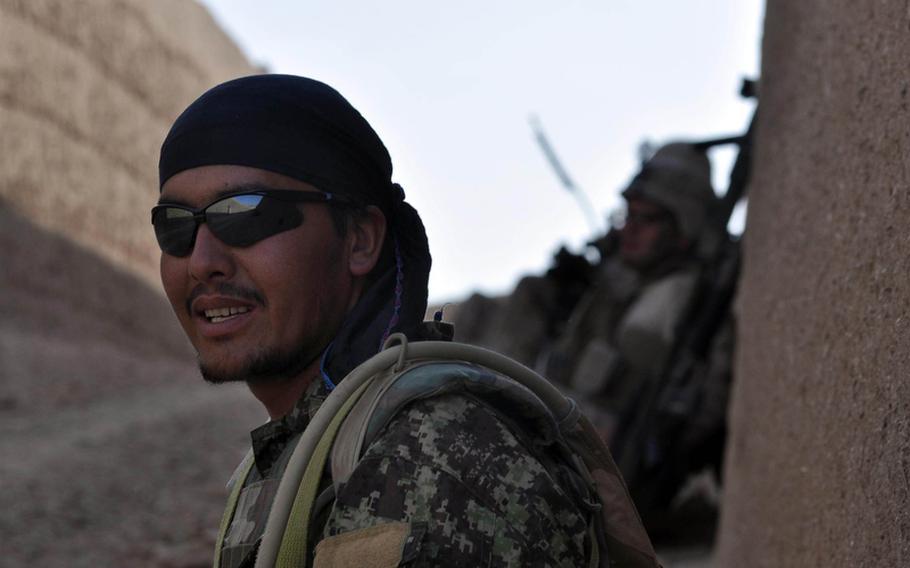 Buy Photo
An Afghan National Army soldier rests along with Marines during an early morning patrol in a small village north of Musa Qala&#39;s district center May 27. The Afghan Army has only a small presence north of the district center, and until recently didn&#39;t engage civilians while patrolling. The Marines of Company I, 3rd Battalion, 2nd Marine Regiment are teaching the Afghan troops better ways to operate and build confidence among locals in their country&#39;s security forces. (Matt Millham/Stars and Stripes) 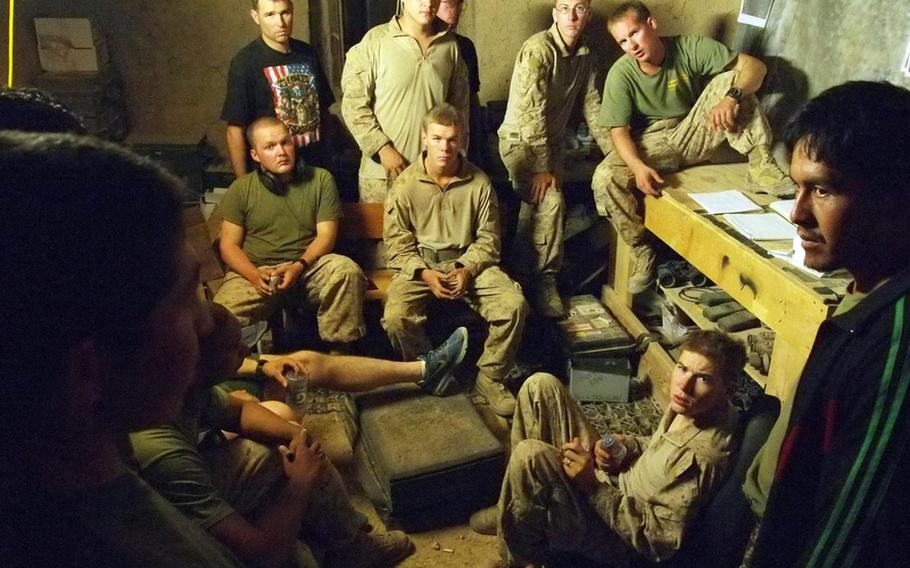 Buy Photo
Marine team leader Sgt. Randy Williamson, sitting on the table at right, listens along with his troops May 26 as his words are translated to Afghan soldiers who will accompany them on a patrol early the next morning. (Matt Millham/Stars and Stripes) 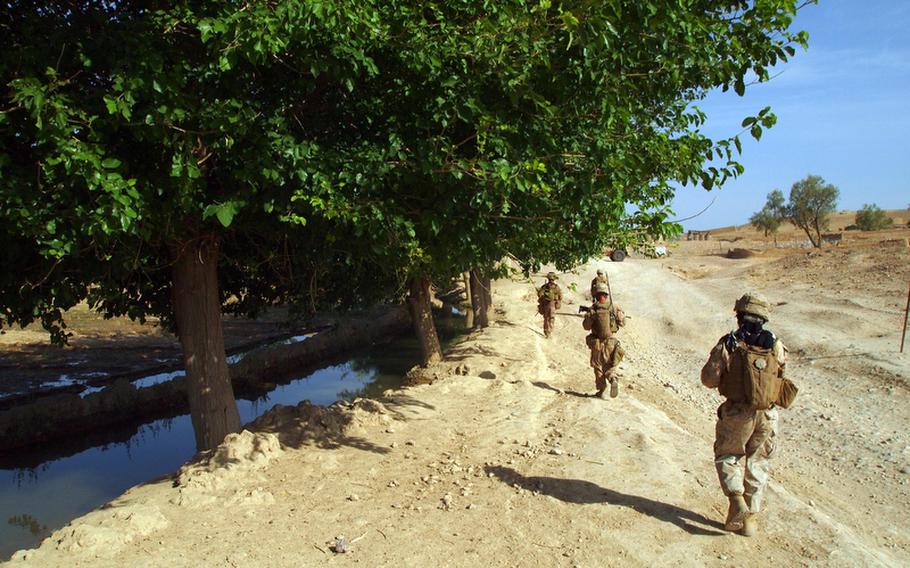 Buy Photo
Marines of Company I, 3rd Battalion 2nd Marines return to base after an early morning patrol May 27 to engage with locals. (Matt Millham/Stars and Stripes) 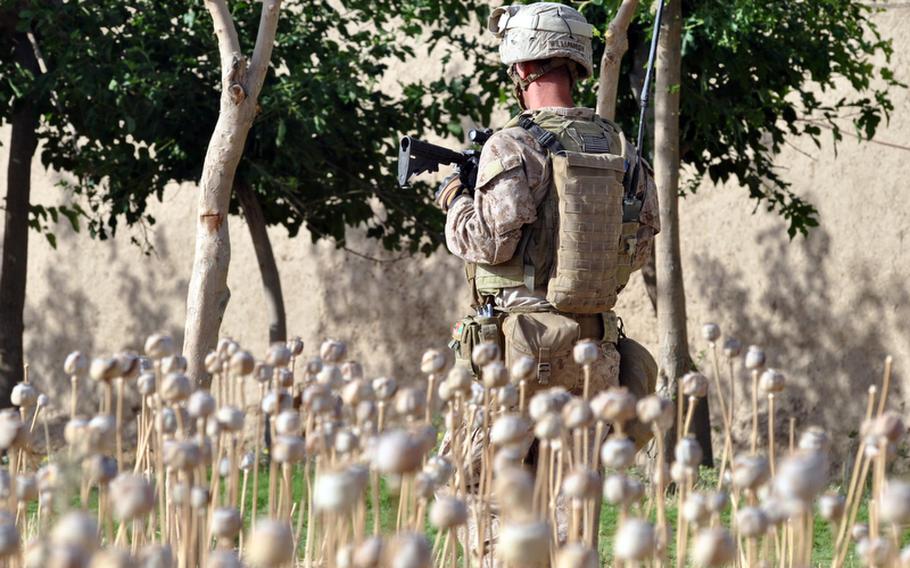 Buy Photo
Marine Sgt. Randy Williamson, a team leader with Company I, 3rd Battalion, 2nd Marines, walks past a field of harvested poppy in the middle of a small village north of Musa Qala&#39;s district center during a patrol May 27 to engage with locals and deter Taliban activity. The local economy is almost totally dependent on poppies. (Matt Millham/Stars and Stripes) 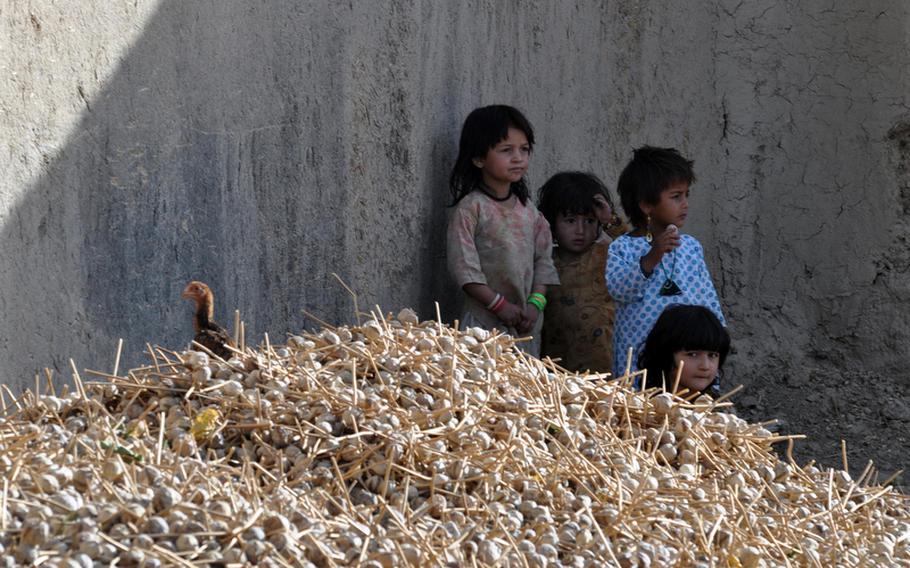 Buy Photo
Small girls stop playing near a pile of poppy bulbs to watch a patrol of U.S. Marines walk through their neighborhood May 27. (Matt Millham/Stars and Stripes) 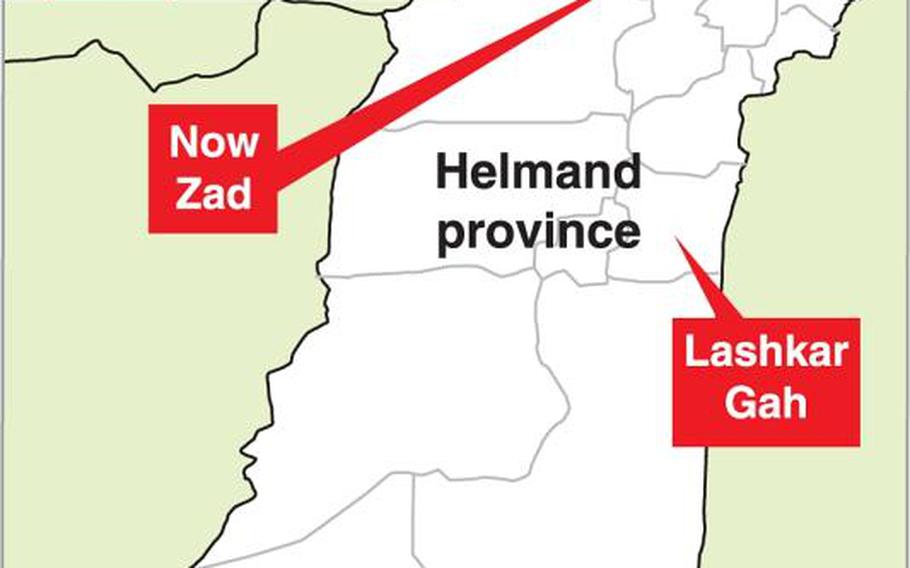 MUSA QALA, Afghanistan &mdash; More than a year after U.S. Marines took responsibility from British forces for the northern reaches of Helmand&rsquo;s Musa Qala district, they are struggling to convince skeptical locals that this time, Western forces are going to make sure the stability is lasting.

They do not have history on their side. The locals have trusted the coalition before, and it didn&rsquo;t go well.

In fall 2006, the British brokered a secret truce with the Taliban and pulled their forces out of Musa Qala. In return, the Taliban were to keep their hands off the district, leaving its administration to a group of local elders who helped negotiate the settlement and its security to local militia.

Initially, the deal held. But five months after the British pulled back, the Taliban overran Musa Qala, jailed the elders who agreed to the plan and imposed a strict vision of Islam on the citizens.

&ldquo;I think [winning over locals is] very, very tough because of the history this place has,&rdquo; said Capt. Mike Mulvaney, a native of Warwick, R.I., and commander of Company I, 3rd Battalion, 2nd Marine Regiment, which oversees this battlespace.

He said that talk of a U.S. troop withdrawal, expected to begin in July, has only added to locals&rsquo; reticence about working with the Marines.

&ldquo;It&rsquo;s a fact that eventually we&rsquo;re going to withdraw,&rdquo; Mulvaney said, &ldquo;Fighting that has been our biggest obstacle.&rdquo;

Developing anything beyond guarded relationships with local leaders has proved difficult, and citizens are reluctant to take government or civil posts.

But even if they were willing, there might not be enough educated locals to round out a functioning local government.

Mulvaney has dubbed the area, roughly 50 square miles and about three times longer north to south than it is wide, &ldquo;the Ozarks of Helmand.&rdquo; Its agrarian economy is almost entirely reliant on poppy and its population is, perhaps even more so than other areas of Afghanistan, illiterate and isolated.

His headquarters at Patrol Base Habib is just a few miles north of Musa Qala&rsquo;s bustling district center. The 3/2 headquarters sits right next to the coalition-friendly district governor, but it might as well be 300 miles away, he said.

Though far behind the district center in terms of development, security here has dramatically improved over the last year, and the last six months have been the most stable in recent memory, Mulvaney said. People who had fled the area during heavy fighting have returned, he said, citing data from an ongoing census that indicates abandoned homes are again inhabited.

Yet the people on this northern frontier have been slower to embrace the Marines than Afghans in the district&rsquo;s south. There, Marines are using a combination of focused spending and targeted firepower to gain the support of wary Afghans in order to connect Musa Qala and neighboring Now Zad and Sangin districts to Helmand&rsquo;s provincial capital, Lashkar Gah.

Mulvaney, whose battlespace lies outside that important development corridor, has not been as quick to use cash to get locals to the table. He admits that his tightfisted approach might not bring about the kind of cooperation the Marines are after, but &ldquo;I did not want to turn this into a dependent society,&rdquo; he said.

While he is spending on projects identified as beneficial for the community as a whole, such as wells, a road to the district center and repairs to a road that routinely floods, &ldquo;I had some pretty specific guidance of what I wanted to do with that, and throwing money at a problem was not what I wanted to do,&rdquo; he said. &ldquo;Because when we go away and the money goes away, the problem is still there.&rdquo;

Besides, the unit he replaced tried an easy money policy, and there&rsquo;s little evidence that anything substantial came of it.

A school built by his predecessors in Karimanda, one of the northernmost villages in his area, remains empty.

&ldquo;People are eager to get into the school, we just can&rsquo;t find a teacher that&rsquo;s willing to stay around and teach,&rdquo; said Staff Sgt. Josh Wartchow of Doylestown, Pa., the senior enlisted Marine at Patrol Base Griffin, which overlooks Karimanda.

Mulvaney&rsquo;s predecessors were also unable to entice any key opinion leaders to come forward and offer their approval. That&rsquo;s likely because the Taliban threat, though not as pervasive as it once was, is nonetheless a potent recent memory.

Instead of buying the battlespace, Mulvaney&rsquo;s Marines are intent on attracting locals to their side by convincing them that the Marines and nascent Afghan government &mdash; which is all but absent here except for the Afghan National Police and army &mdash; offer a brighter future than the Taliban. Given the area&rsquo;s past, that&rsquo;s difficult to sell.

In the beginning of the company&rsquo;s deployment, Sgt. Randy Williamson and his squad trekked once a week to visit a local mullah. Each time, the easygoing Marine from Stroudsburg, Pa., spent at least an hour talking with the religious leader in his home over steaming cups of sweet chai tea.

Williamson thought he was building the kind of relationship that would lead to an endorsement for the Marines, giving them a much-needed inroad to the larger community.

But when Williamson dropped by for a third week straight, the mullah asked him to cut back on the visits. He said he enjoyed the meetings and was willing to continue them, but less frequently. He didn&rsquo;t want anybody to think &mdash; especially the Taliban &mdash; that he was siding with the U.S.-led military coalition.

&ldquo;You&rsquo;re trained to engage key leadership, you&rsquo;re trained to engage certain civil authorities, and a lot of these aren&rsquo;t present here, or they&rsquo;re underground because they don&rsquo;t want to be bothered with that,&rdquo; Mulvaney said. &ldquo;They want to do their thing, be left alone, grow my poppy, grow my wheat, sustain my family and get on with it.&rdquo;

&ldquo;The Taliban has such a strong grip on this place that it is hard to get people away from that mentality,&rdquo; Williamson said.

Village elders and other leaders have chosen not to meet publicly with the Marines, if they meet with them at all. In three months, three different men came forward claiming to be the senior elder for one of the eight major villages in his area, but Mulvaney suspects all were proxies for the man he&rsquo;s trying to rally.

The few educated people he has met have also preferred to work behind the scenes if they assist at all. In an attempt to extend some semblance of Afghan governance into the area, Mulvaney pressed one man to run for the district community council; he declined the offer.

Not all the Marines here share the belief that residents are quaking in their sandals over the possibility of a Taliban resurgence.

Most Marines interviewed in Karimanda believe the locals are fed up with the Taliban and are ready to throw in their lot with the Marines.

&ldquo;They intimidated the educated class so much from the beginning that they&rsquo;re still having trouble finding teachers and doctors,&rdquo; said Sgt. Ken Gergely, a squad leader from Dearborn, Mich., &ldquo;but they&rsquo;re so sick and tired of being pushed around by everyone that we seem to be the bigger dog, so they&rsquo;re starting to go to us.&rdquo;

Gergely compares what he&rsquo;s seeing in Karimanda to the Awakening movement in Iraq, which helped turn the tide in that conflict.

&ldquo;If the Taliban comes down here and spreads rumors that our doctors are poisoning them, the locals are going to be like, &lsquo;No, I don&rsquo;t think so. We&rsquo;ve gone to them a lot and they&rsquo;ve helped us out,&rsquo; &rdquo; said Cpl. James B. Rogers, a team leader from York, Pa., citing a bit of propaganda insurgents tried to use to discredit the Marines.

The children and younger Afghans eagerly interact with the Marines during their daily patrols in Karimanda, Rogers said, often in the hopes of getting free sweets or water. But many of the older men, &ldquo;because they&rsquo;ve been at war for so long and all, they&rsquo;ve seen this, they shy away from us.&rdquo;

The Taliban have tried to capitalize on such reticence, waging a simple, fear-based information campaign reminding locals of what happened the last time the coalition left. Not all the locals have been cowed, but it makes the Marines&rsquo; job that much harder.

&ldquo;The propaganda that&rsquo;s tied to us leaving eventually puts these guys on the fence,&rdquo; Mulvaney said. &ldquo;It&rsquo;s not a criticism of anybody in the government; it&rsquo;s a fact.&rdquo;