Marines, soldiers square off in sports 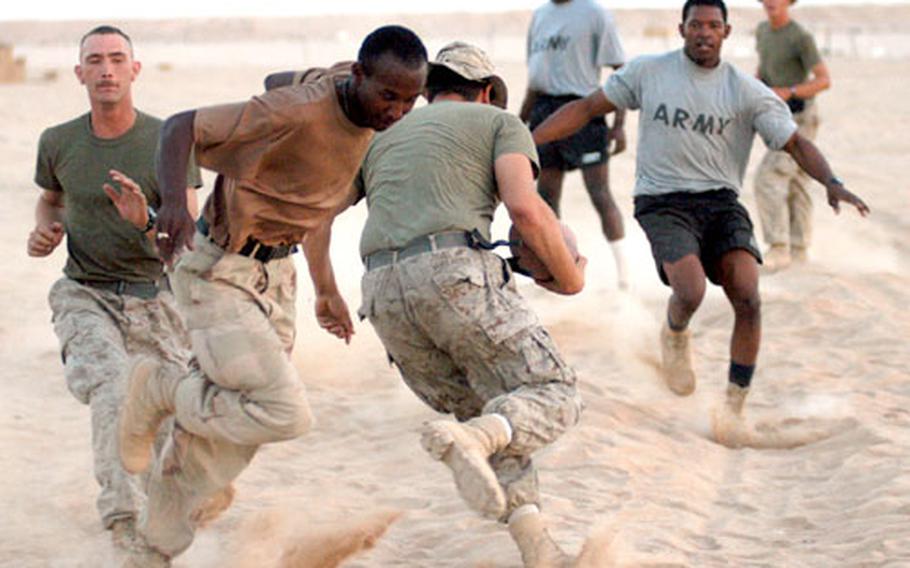 A Marine tries to break through the Army line Tuesday night during a football game between the 24th Marine Expeditionary Unit and units from the 2nd Battalion, 7th Cavalry Regiment. (Jason Chudy / S&S)

CAMP DUKE, Iraq &#8212; The only American bullets flying around the Najaf area these days are quick passes or line drives into centerfield.

Soldiers from the 2nd Battalion, 7th Cavalry Regiment and Marines from the 24th Marine Expeditionary Unit, who are waiting to move from their base camp, have been fighting evening battles of their own on a clear patch of dirt and dust.

On Monday night, the two teams squared off in stickball, using a wadded-up cloth wrapped in duct tape as a ball and a pick handle as a bat. On Tuesday they pulled out the old pigskin.

Before joining the Army, Davis was a Marine working on assault amphibian vehicles.

After arriving at Duke from Najaf, Davis approached the Marines to see if he knew any of them. He then asked if they would like to play against the Army.

They accepted, and now the teams will face each other on this field of battle every night until they leave.

Wednesday night&#8217;s sporting event hadn&#8217;t been decided yet, but the Marines anxiously eyed a handful of Iraqi soldiers watching the game from a nearby berm.