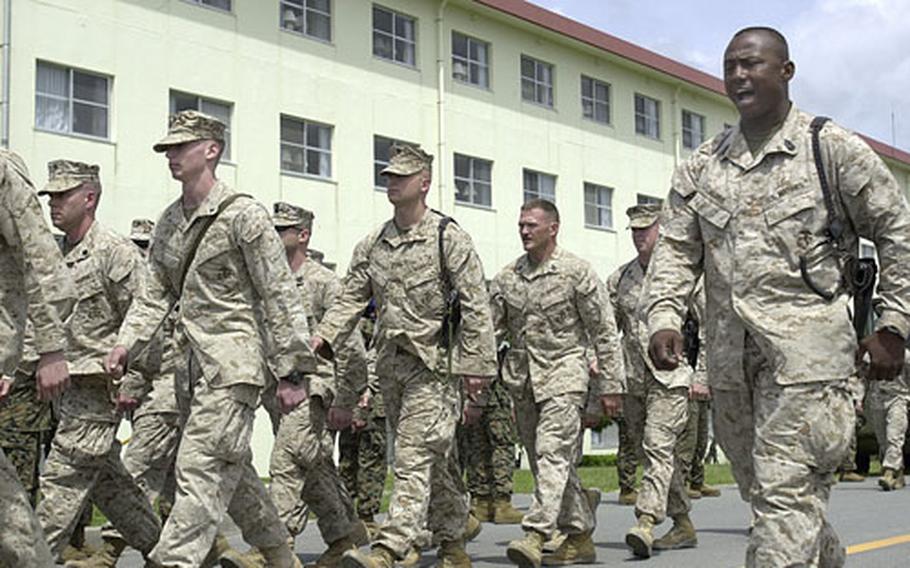 1st Sgt. Hesham Harris calls off cadence to a platoon of 9th Engineer Support Battalion Marines as they march to the battalion’s armory at Camp Hansen, Okinawa, on Sunday. About 280 Marines returned from a seven-month deployment in Iraq. (Cindy Fisher / S&S)

1st Sgt. Hesham Harris calls off cadence to a platoon of 9th Engineer Support Battalion Marines as they march to the battalion’s armory at Camp Hansen, Okinawa, on Sunday. About 280 Marines returned from a seven-month deployment in Iraq. (Cindy Fisher / S&S) 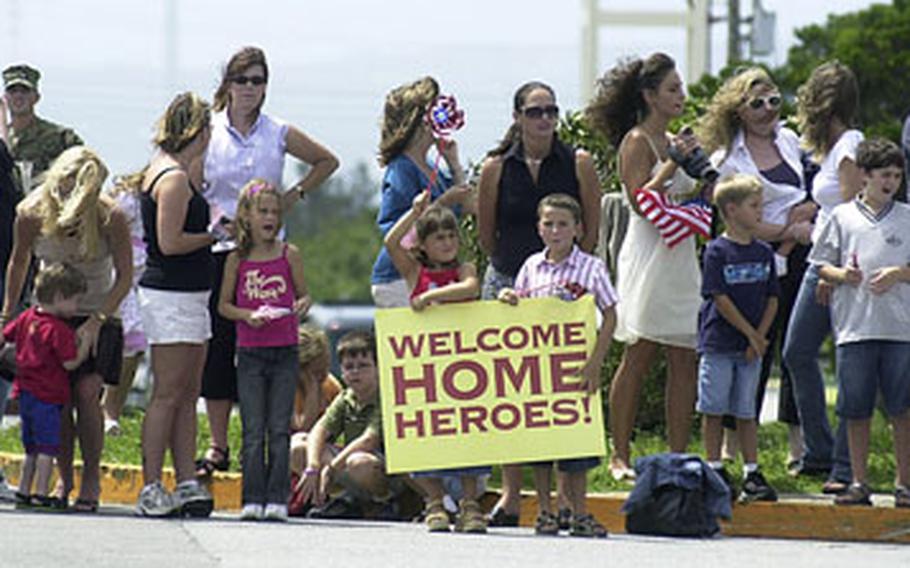 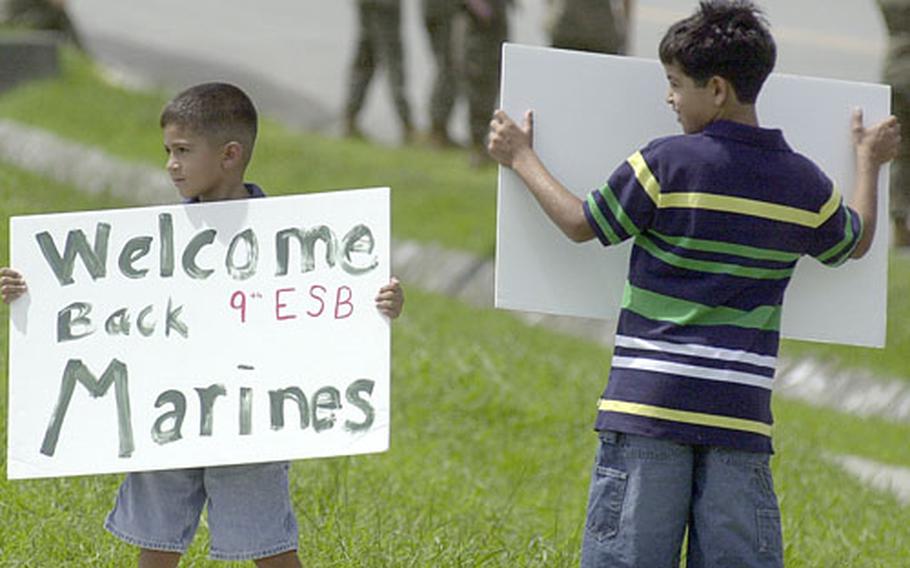 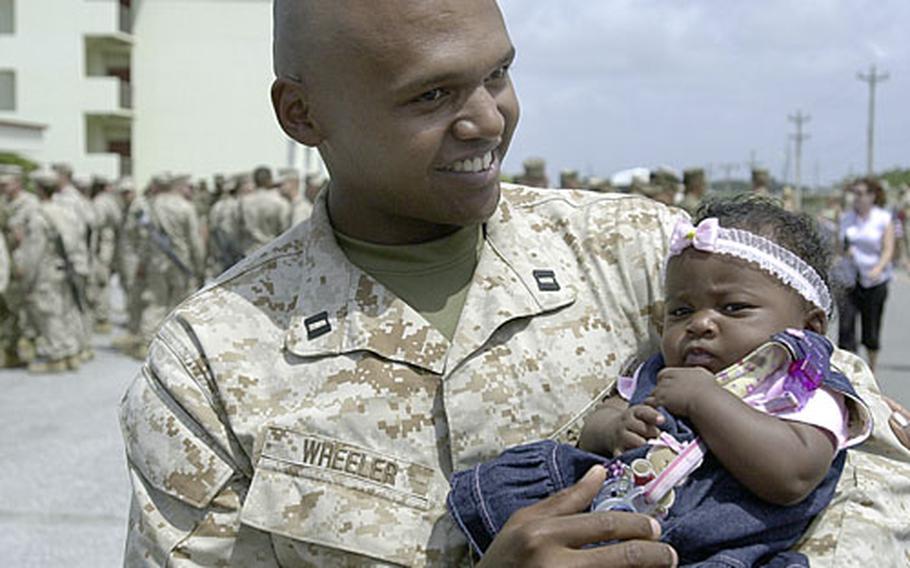 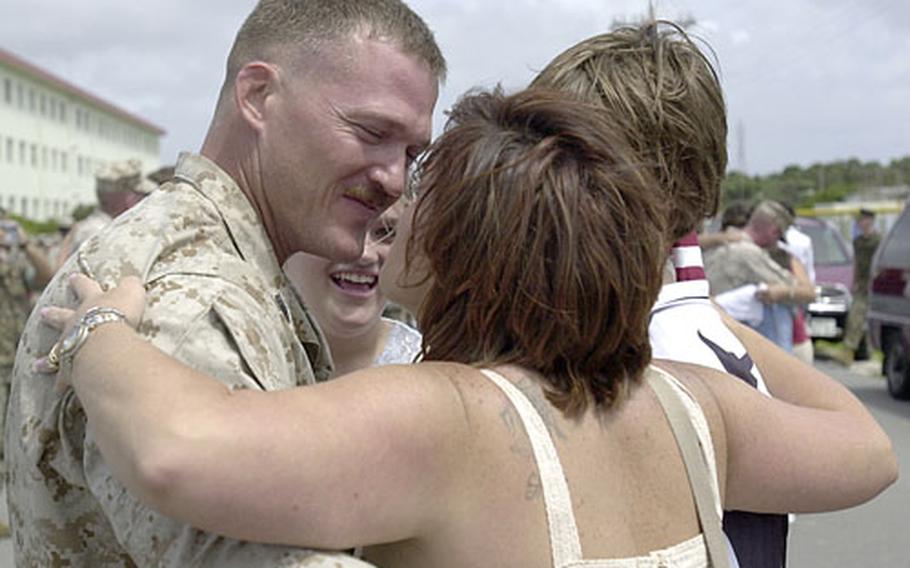 CAMP HANSEN, Okinawa &#8212; Marines returning Sunday from a seven-month Iraq deployment dispute intelligence findings reported in The Washington Post that prospects are dim for securing the area in which they served.

The more than 280 Marines of 9th Engineer Support Battalion Forward conducted missions throughout the beleaguered Anbar province and &#8220;made significant progress in depriving terrorists of their safe havens in the province,&#8221; said commanding officer Maj. Vernon Veggeberg.

Fanfare and family greeted the Marines when they returned to Camp Hansen.

Last week the Post reported that a secret report filed by Col. Pete Devlin, a Marine intelligence officer in Iraq, concluded that prospects for securing the western province were poor and there was little the U.S. military can do to improve the political and social situation.

Veggeberg had a different assessment.

&#8220;There use to be places where no one wanted to go because you were guaranteed to be blown up by an [improvised explosive device]. We now own those areas,&#8221; Veggeberg said.

He said he considered that the unit&#8217;s major accomplishment, adding the he was even able to bring two-star generals in to tour previously inaccessible areas.

Cpl. Brandon Callahan, 21, with a security platoon, agreed the battalion had the situation in hand.

The Marines repaired roads, found and removed IEDs and performed a lot of general maintenance, Veggeberg said. This included building Iraqi army observation and combat posts, which enhanced their control of the area, he said.

There was a cost for that control, though.

One Marine was killed April 8 and another was medically evacuated. Five explosive ordnance disposal Marines from the unit, who were attached to other units in Iraq, also were killed in action and another was seriously wounded, Veggeberg said.

But his Marines &#8220;came back swinging&#8221; from those losses and he&#8217;s confident their replacement, another contingent of about 400 9th ESB Marines who deployed in August, will continue the job, he said.

The two halves of the battalion transferred authority during a 30-day overlap.

One bit of wisdom Veggeberg&#8217;s Marines passed on was for vehicles to slow down outside the camps.

Now that they are home, some of the Marines had big plans for relaxing and renewing family ties.

For Capt. Elishama Wheeler and Staff Sgt. Jonathon McClary, the homecoming was especially sweet as both greeted new daughters for the first time.

&#8220;I was looking forward to it the whole time I was deployed,&#8221; McClary said upon seeing his daughter, 6-week-old Madison McClary.

CAMP HANSEN, Okinawa &#8212; One of the toughest things for Cpl. Brandon Callahan to deal with while deployed to Iraq with the 9th Engineer Support Battalion was the death of one of his best friends, he said.

But, he knew he had to keep doing his job &#8212; keeping his fellow Marines safe, he said.