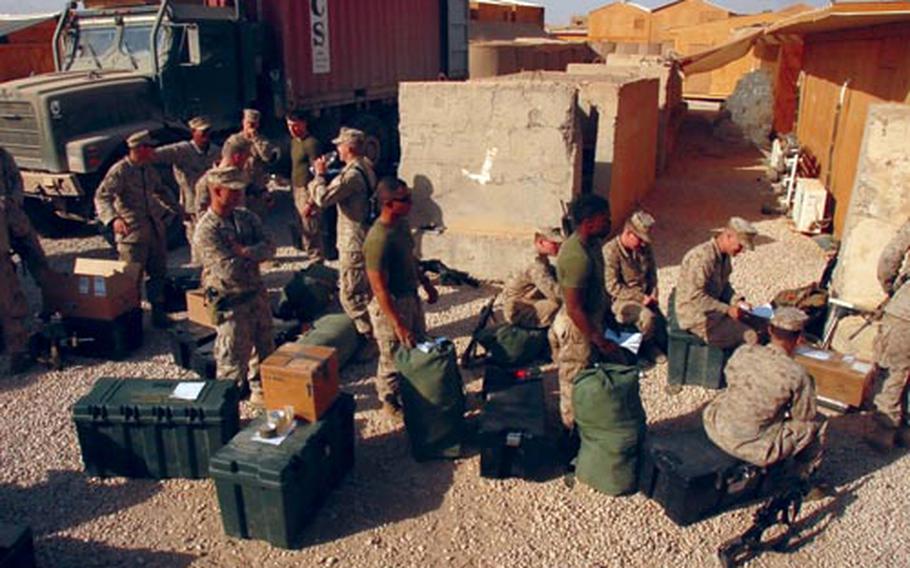 Marines at Camp Eagle, an outpost in Ramadi, wait in line to send mail home. The Marines are leaving in April, and many sent their extra gear home so they wouldn’t have to carry it with them on the trip home. A traveling post office goes to Camp Eagle, population 140, about once every two weeks. (Ashley Rowland / S&S)

CAMP EAGLE, Iraq &#8212; Which costs more: Buying a box full of toothbrushes or mailing it halfway around the world?

At tiny Camp Eagle, population 140, the mail doesn&#8217;t come very often &#8212; just once every two weeks, when a postal clerk stops at this tiny outpost on the outskirts of Ramadi.

When the clerk came one day a few weeks ago, Marines lined up at his makeshift post office (a table set up between a plywood hut and a Humvee) to mail home their extra gear, stuffed into green duffel bags and sturdy black boxes.

The members of Golf Company, 2nd Battalion, 9th Marines are going home in April. Most of their boxes were stuffed with military-issued boots, sleeping bags and clothes, plus gifts sent from home &#8212; mainly, toothbrushes.

"I got like 30 toothbrushes sent here from people, so I can have toothbrushes for the rest of my life," Lance Cpl. Joseph Smyth said.

"We had a guy who sent home a whole box of nothing but toothbrushes, toothpaste, razors, a bunch of hygiene stuff," Sgt. Ian Hendricks said.

It was almost a case of too much of a good thing.

But there is something these Marines, who get two hot meals a day, wish they had gotten more of in their care packages.

"Canned food. Anything that you can just open and eat," Sgt. Kenneth Harrington said.