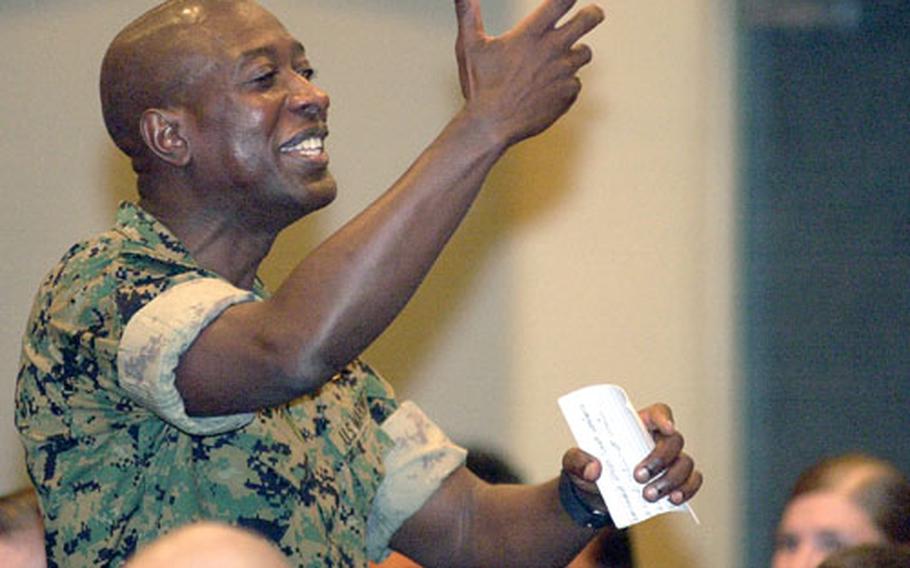 Sgt. Maj. of the Marine Corps Carlton W. Kent shares an anecdote during a brief with Marines at the Camp Kinser, Okinawa, auditorium on Tuesday. (Cindy Fisher / S&S)

Sgt. Maj. of the Marine Corps Carlton W. Kent shares an anecdote during a brief with Marines at the Camp Kinser, Okinawa, auditorium on Tuesday. (Cindy Fisher / S&S) 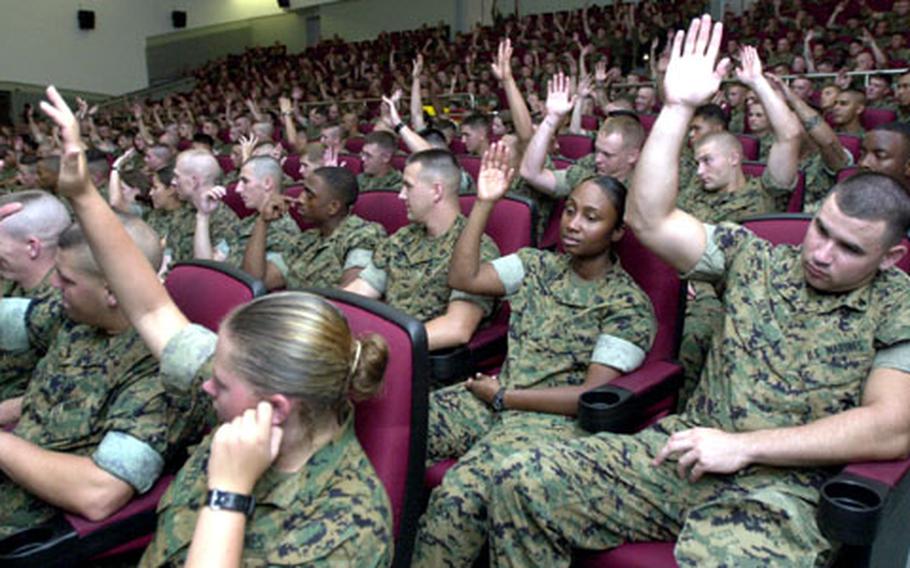 More than half the Marines at the Camp Foster Theater raise their hands Tuesday when Sgt. Maj. of the Marine Corps Carlton W. Kent asks who has tattoos. (Cindy Fisher / S&S) 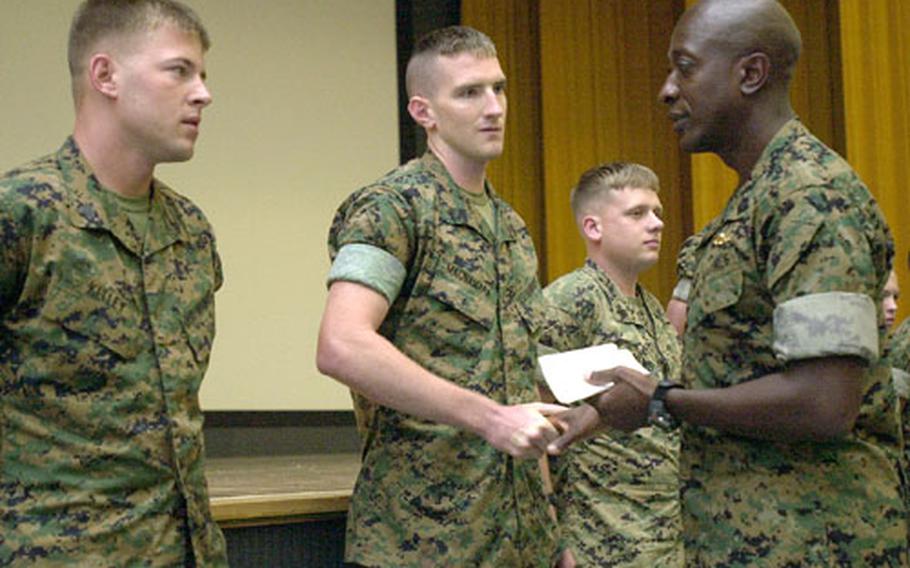 OKINAWA &#8212; The 16th sergeant major of the Marine Corps, Carlton W. Kent, new to the job of senior enlisted leader of Marines, is visiting several Marine, Navy and Army bases in Okinawa and mainland Japan. He spoke with Stars and Stripes on Tuesday about current issues in the Marine Corps.

Stars and Stripes: What are your goals, what issues would you like to address, in the next four years as sergeant major of the Corps?

Kent: My priority is [noncommissioned officer] development and to ensure that we train our NCOs to enhance their combat effectiveness. We&#8217;re talking about the strategic corporal. &#8230; We need to send them to schools usually set aside for [staff noncommissioned officers] and officers, for example, [teaching forward air controllers to] call for fire. We have great NCOs, but we can enhance their combat effectiveness.

Stripes: The Army has extended downrange deployments to 15 months. Can Marines expect to see longer tours as well?

Stripes: Many Marines are on a second, third or fourth deployment to Iraq or Afghanistan. How do you see the Marine Corps coping with the tempo?

Kent: That&#8217;s why we are increasing our end strength by 27,000 over the next five years, so we can reduce the number of deployments Marines are on.

Stripes: How has the ongoing war and its subsequent numerous deployments affected enlisted retention and how do you see the Marine Corps coping with this issue?

Kent: Retention for the Marine Corps is going pretty good. Our retention is based on positive leadership. For example, right now, we have a battalion that&#8217;s going forward and they had 200 Marines extend past their [end of active service] to go with them. They didn&#8217;t have to go, but they volunteered to go back with their fellow Marines.

Stripes: Despite the numerous unit deployments from Okinawa to Iraq, there is still a Corps-wide perception that Marines stationed in Japan are &#8220;hiding out&#8221; from the war in Iraq and possible deployment there. What do you have to say about that?

Kent: That perception is not in the eyes of the commandant, me or senior leaders. We know that the Marines and sailors of the III (Marine Expeditionary Force) are all over the map, deployed around the world and engaged in combat and in forward-deployed areas. That perception &#8212; I don&#8217;t know where that is coming from. The commandant and I know that III MEF is in the battle.

Stripes: How are the Corps and its Marines performing in Iraq?

Kent: They are doing amazing things. Look at western Al Anbar &#8230; They are connecting with the Iraqi people. They are standing up Iraqi forces. They are connecting with Iraqi tribes who are standing up to insurgents. There has been a big change, a positive change, since we first went into Iraq in 2004. The media reports so much negative. We just hope they will show the positive side of what the Marine Corps and the Navy are doing in Iraq. And the Army and the Air Force.

Stripes: In combat, Marines can find themselves in difficult, turbulent situations in which they might receive orders that seem questionable. If a Marine considers an order unlawful, should he or she refuse the order and how?

Kent: That&#8217;s why you have the chain of command. You need to report it to the next higher in the chain. If it&#8217;s not right for the Marine Corps, then don&#8217;t do it. If you know it&#8217;s morally wrong, then don&#8217;t do it. We need to keep the moral high ground. There is always someone higher in the chain of command that you can take an issue to. And if Marines witness something like that, then they have a responsibility to report it. If it&#8217;s not a lawful order, it&#8217;s your job to deny it; you have a moral obligation to report it as soon as possible.

Stripes: How do you convince Marines they should report possible war crimes by their fellow Marines &#8212; those protecting their back and fighting with them in combat?

Kent: It may be hard, but it&#8217;s the right thing to do for the Marine Corps because what we do wrong in combat affects the whole Marine Corps, not just individuals. We have to protect the integrity of the Marine Corps and part of that is reporting somebody who is committing war crimes.

Stripes: How are court dramas like the Hamdaniya and Haditha cases, both of which have trials set to conclude this month at Camp Pendleton, affecting the morale of Marines on the front lines in Iraq?

Kent: It doesn&#8217;t affect them at all. The Marines are focused on one thing in combat: accomplishing all missions set forth.

Stripes: With all the violence and bloodshed experienced in Iraq, many Marines could be facing a lifetime dealing with post-traumatic stress disorder. How do you think the Corps should help Marines handle this and recognize signs of it in others?

Kent: First of all, we need to educate Marines about post-traumatic stress disorder. Marines need to know it&#8217;s OK to seek out help if they need it and that includes the leadership. We need to reach out to help Marines. They need to know that this is not a career-ender. It&#8217;s better that they seek out help. The key is education.

Stripes: What difference do you see between today&#8217;s young enlisted members and the Marines who went through boot camp when you first came in?

Stripes: The number of hours of values training in Marine boot camp has increased from 24 to 38 hours. Is this is enough? How is it helping?

Kent: I think it&#8217;s right on target. We really need to refocus on our core values: honor, courage and commitment. It focuses on directing Marines how to perform in combat and on moral issues.

OKINAWA &#8212; Sgt. Maj. of the Marine Corps Carlton W. Kent&#8217;s first stop on his first visit to the Pacific was Okinawa, where he talked to Marines at several camps Monday and Tuesday.

In his briefings, followed by question-and-answer sessions, he talked about the projected addition of 27,000 Marines to the Corps over the next five years.

He said recruiters are meeting mission requirements without lowering the Corps&#8217; standards and doing so consistently, something other services haven&#8217;t managed.

To underscore his point, he cited an Army poster he saw that read: &#8220;The best soldier for the job is a Marine.&#8221; The poster was designed to recruit Marines exiting the Corps, he said.

&#8220;Hell no! There would be two Marines in the Marine Corps before we started recruiting like that. It would be me and the commandant,&#8221; he said.

He assured Marines that a new tattoo policy prohibiting &#8220;sleeve&#8221; tattoos doesn&#8217;t mean the commandant is against tattoos. Kent has four tattoos, something he said the commandant knew when Kent was selected.

Kent was to head to South Korea on Wednesday to speak with Marine Forces Korea servicemembers, and he was scheduled to brief III MEF Marines at Camp Fuji and Marine Corps Air Station Iwakuni in Japan on Thursday. He was to head back to the States on Friday.