Marines with 2/11 Civil Affairs Detachment 3, Regimental Combat Team 1, provide security during a visit Monday to a medical clinic being set up in Karmah in Anbar province, Iraq. (Cindy Fisher / S&S)

Marines with 2/11 Civil Affairs Detachment 3, Regimental Combat Team 1, provide security during a visit Monday to a medical clinic being set up in Karmah in Anbar province, Iraq. (Cindy Fisher / S&S) 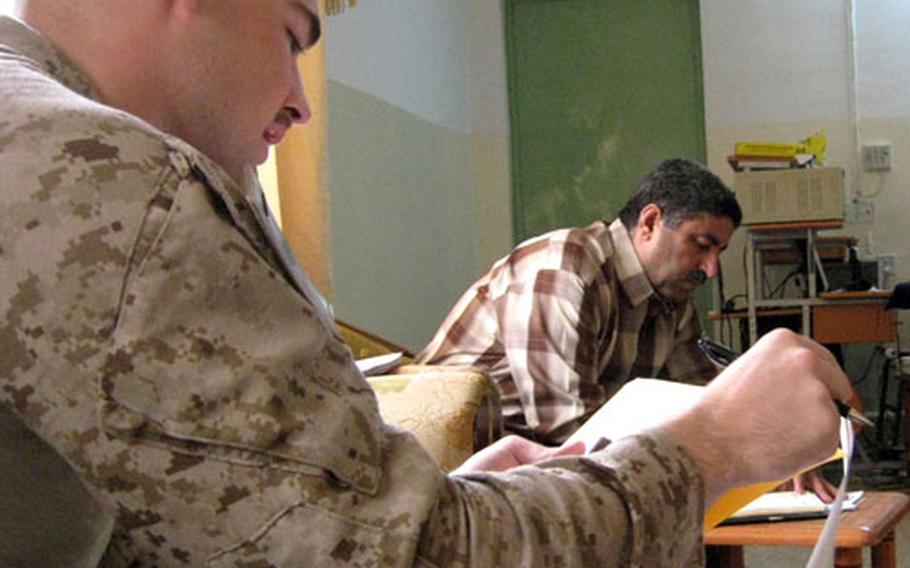 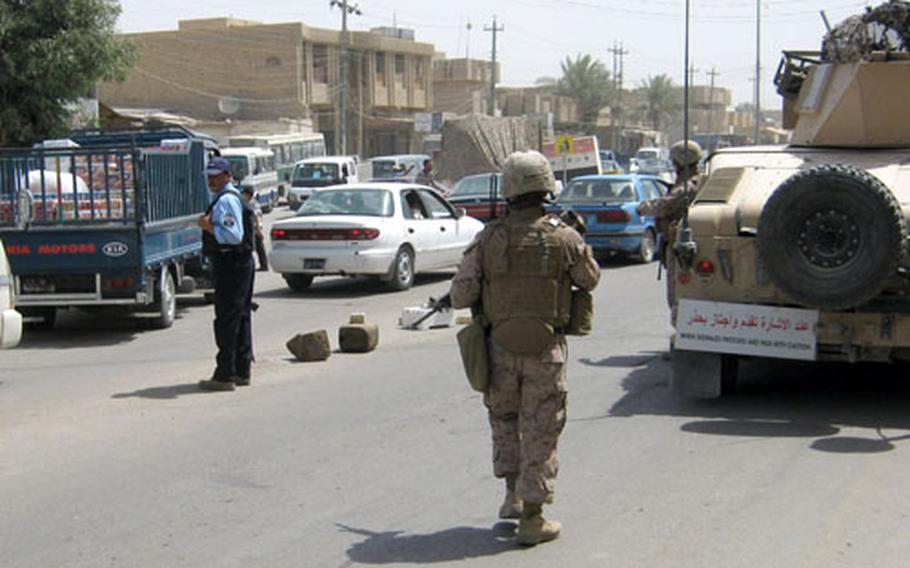 An Iraqi policeman helps control traffic as Marines with a team from 2/11 Civil Affairs Detachment 3, Regimental Combat Team 1, move toward a sewage treatment facility in Fallujah on Tuesday. The Marines were in the city to check on the work done at the facility by Iraqi contractors. (Cindy Fisher / S&S) A Marine provides security as others on a team with 2/11 Civil Affairs Detachment 3, Regimental Combat Team 1, visit a sewage treatment facility in Fallujah in Anbar province, Iraq, on Tuesday. The facility is inadequate to serve the city of at least 250,000. (Cindy Fisher / S&S)

FALLUJAH, Iraq &#8212; Not long ago, the Marines of 2nd Battalion, 11th Marine Regiment, would have been tasked with destroying targets in Anbar province.

Now, these California-based artillery Marines have been designated as Civil Affairs Detachment 3, Regimental Combat Team 1. They work in small teams in Fallujah, Karmah, Habbaniyah, Zaidon and other areas, overseeing the rebuilding of schools, medical clinics, water and sewage treatment facilities and other structures.

Apart from the improved security situation, they say, it is rebuilding Anbar that will bring U.S. troops closer to leaving.

In fiscal 2008 alone, the U.S. military has pumped more than $106 million U.S. tax dollars into restoring the province&#8217;s infrastructure.

It&#8217;s a monumental effort in a province ruined by years of fighting and neglect.

Iraqis in many areas live in dire conditions so much worse than what Americans consider poverty that it doesn&#8217;t compare, said Chief Warrant Officer 2 Byron T. Yoshida, 29, one of the team leaders, who has been in Fallujah for six months.

The problems are many:

Electricity from the national grid is available only for a couple of hours a day.The sewage treatment facilities are inadequate.Clean water is in short supply.These civic obstacles in Anbar are common throughout Iraq.

The public works systems in place are further strained as Iraqis tap into them illegally, Yoshida said.

The Iraqi central government has provided about $4.10 million to fund needed projects, according to Multi-National Force &#8211; West officials.

The government&#8217;s revenue, mostly generated by oil, has soared but officials have been slow to spend it on rebuilding the country, amassing a huge surplus instead, according to a study issued this week by the Government Accountability Office.

From 2005 through 2007, only one percent of the $67 billion spent on operating and investment activities was used to maintain roads, bridges and other infrastructure.

In Anbar province, there is a disconnect between the central government&#8217;s funding of projects and residents&#8217; needs, said 1st Lt. Eric W. Spitznogle, 24, a team leader from Cleveland.

All the work is contracted out to Iraqis, said 1st Lt. Nick McGrath, 27, from Lawton, Iowa, the executive officer for 2/11 Civil Affairs Detachment 3. "We can fund it, but it&#8217;s their idea, their execution, their long-term plan. It&#8217;s their school, sewage treatment plant, road," McGrath said.

The emergency funds are allocated by Congress and budgeted down to the regimental combat team level. RCT-1&#8217;s commander can approve projects under $50,000, while projects over $50,000 require approval by the deputy commander of MNF &#8211; West.

Yoshida, a team leader in Fallujah proper, and his Marines have spent a lot of time meeting with city leaders and visiting sewage treatment facilities, roads and other projects to ensure the progress of work. They have also provided about 34 generators to be used as backup for electrical power.

For projects in Karmah, Spitznogle works with Mayor Faisal Hamad Khalaf. "If you&#8217;re driving inside the city, you&#8217;ll see a lot of projects that have been paid for by coalition forces," said Khalaf, who added that the rebuilding also has propped up the area&#8217;s economy.

At any given time, the five teams of Detachment 3 oversee about 75 projects, McGrath said.

Such projects will help legitimize the Iraqi government and ensure stability in the province, Yoshida said. People who have electricity, clean water, and are employed don&#8217;t want to participate in an insurgency, he said.

"We&#8217;re trying to prop up the government; set them up for success," Spitznogle said.

Their efforts in Fallujah are working, Staff Sgt. Aaron Collins, 28, a team chief from Phoenix, said.

"They&#8217;re returning to normalcy. People are on the streets. A lot of citizens are rebuilding their homes and that&#8217;s a good sign that they feel secure, they know it&#8217;s going to last," Collins said.

And the Iraqi government is starting to figure things out, Spitznogle said. "Just in the last two months, [there are] more projects being done by the government of Iraq since I got here," he said.