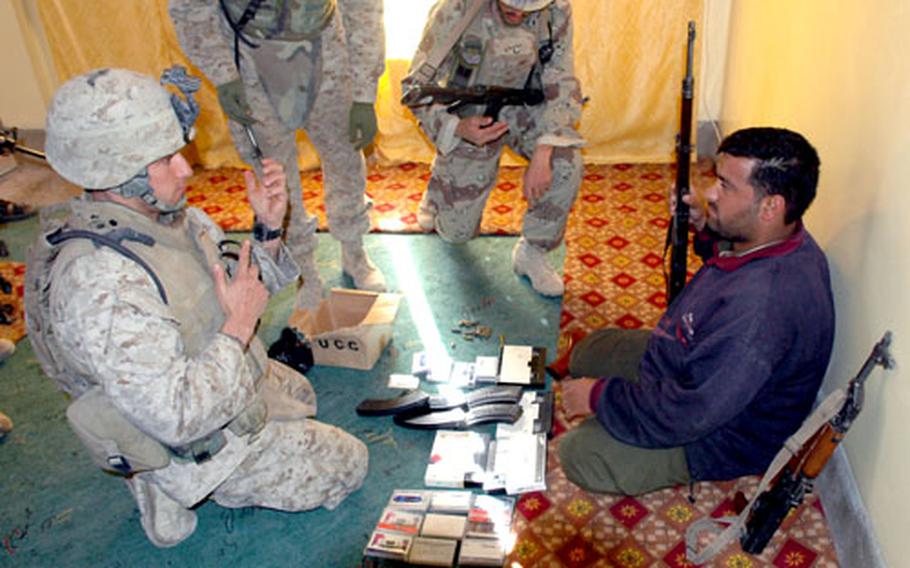 Cpl. Keith Shampaner tells an Iraqi detainee how to pose for a photograph with the gun Marines found in his home. Standard procedure calls for Marines to photograph detainees with whatever suspicious items they have in their possession. (Andrew Tilghman / S&S)

Cpl. Keith Shampaner tells an Iraqi detainee how to pose for a photograph with the gun Marines found in his home. Standard procedure calls for Marines to photograph detainees with whatever suspicious items they have in their possession. (Andrew Tilghman / S&S) 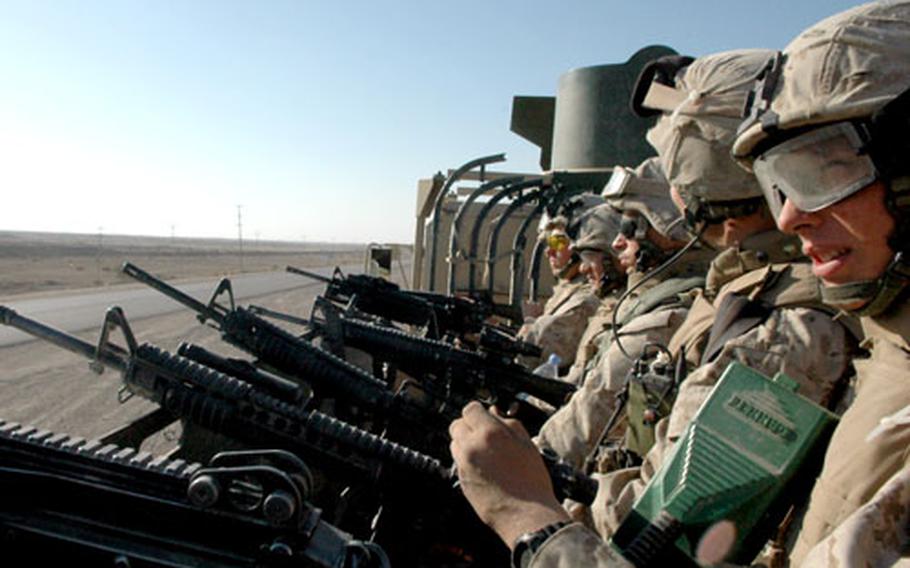 Marines ride back to Camp Fallujah in a truck after spending the day on a house-by-house search in a neighborhood north of the base. (Andrew Tilghman / S&S)

AL KARMAH, Iraq &#8212; About 250 Marines rolled out of Camp Fallujah shortly after dawn Friday and moved into a small, poverty-stricken neighborhood for a house-by-house search of an area believed to be an insurgent stronghold.

Supported by fixed-wing aircraft and accompanied by about 25 Iraqi soldiers, the Marines swept through the swath of ramshackle homes about five miles east of Fallujah on the edge of restive Anbar Province.

Two men were detained and no major weapons caches were uncovered in the mostly Sunni village during an operation designed to limit insurgents&#8217; ability to mount attacks in the run-up to the Dec. 15 national elections.

&#8220;We&#8217;ve searched through that area several times and we just wanted to go back there to remind them that they still cannot stage weapons in that area.

The operation is among many expected to unfold across the country in the coming weeks, as U.S. troops and Iraqis prepare for the first nationwide elections to pick a constitutional government.

A security lockdown imposed last year in and around Fallujah has pushed insurgent activity into the surrounding areas, where several small Sunni towns, like this one, have seen a surge in violence.

On Friday, insurgents fired on the Al Karmah police station and a small firefight ensued. No injures were reported.

The day before, one Marine on a foot patrol was severely injured by a roadside bomb. Another roadside bomb exploded Thursday and caused minor injuries. Also on Thursday, insurgents fired on a patrol of Humvees just outside Al Karmah, Marines said.

As the Marines moved through the residential area, a psychological operations truck with large speakers and an Arabic language recording told residents of the search and urged their cooperation.

While Marines provided nearly all the logistical support for the sweep, about two dozen Iraqi soldiers joined them in the actual house-to-house search.

In one home, Marines became suspicious of a man whose identification card said he was 19, but who looked much older.

The Marines arranged the weapons, ammunition and tapes and told the man to sit down while they photographed him with the suspicious items. Standard procedure calls for Marines to photograph detainees with whatever suspicious items they have in their possession.

A woman at the home who identified herself as the man&#8217;s sister said the man knew nothing about the guns. She said she was hiding the guns for her other brother, who is in prison.

Also during Friday&#8217;s daylong operation, a second man was detained after Marines recognized him as a person seen behaving suspiciously during a previous incident in the area. The man was seen watching a group of Marines and making phone calls from a place where the Marines were later attacked.

The neighborhood searched by Marines was lined with dusty, unpaved roads, and most homes had only cinder-block walls and sparsely furnished rooms.

A nearby Marine camp has taken fire from the neighborhood at least six times in recent months. It lies just off a major route leading north from Fallujah that many Marines refer to as &#8220;IED Alley&#8221; because of the frequency of roadside bombs, known as improvised explosive devices.

At one home, a woman said her husband died after the Marines shot him several months ago.

At another, a woman holding a small child on her hip said she did not mind the search.