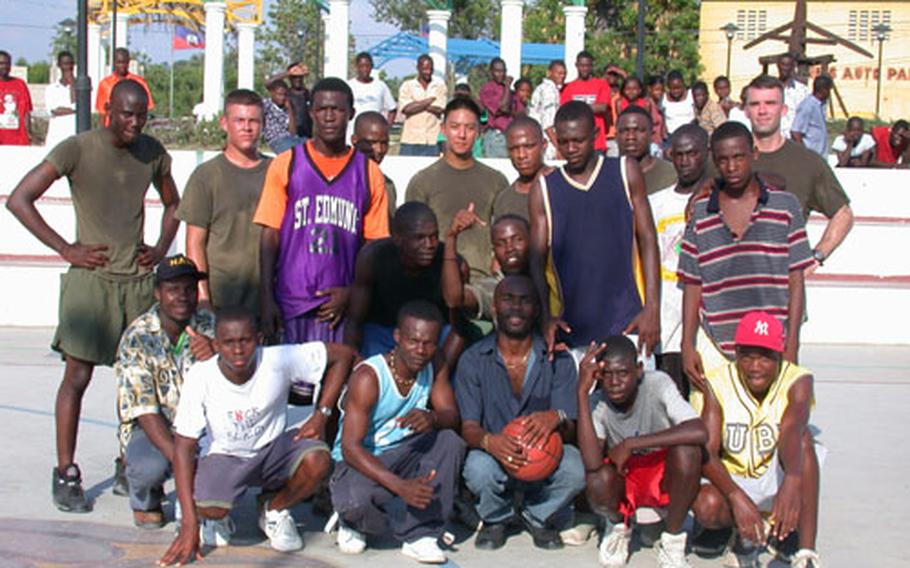 Following a game of U.S.-on-Haiti basketball Friday afternoon, the players gathered for a group photo. Each team played hard - and both claimed victory in the end. The game was coupled with missions to distribute fresh water and set up a health clinic. (Sandra Jontz / S&S)

Following a game of U.S.-on-Haiti basketball Friday afternoon, the players gathered for a group photo. Each team played hard - and both claimed victory in the end. The game was coupled with missions to distribute fresh water and set up a health clinic. (Sandra Jontz / S&S) 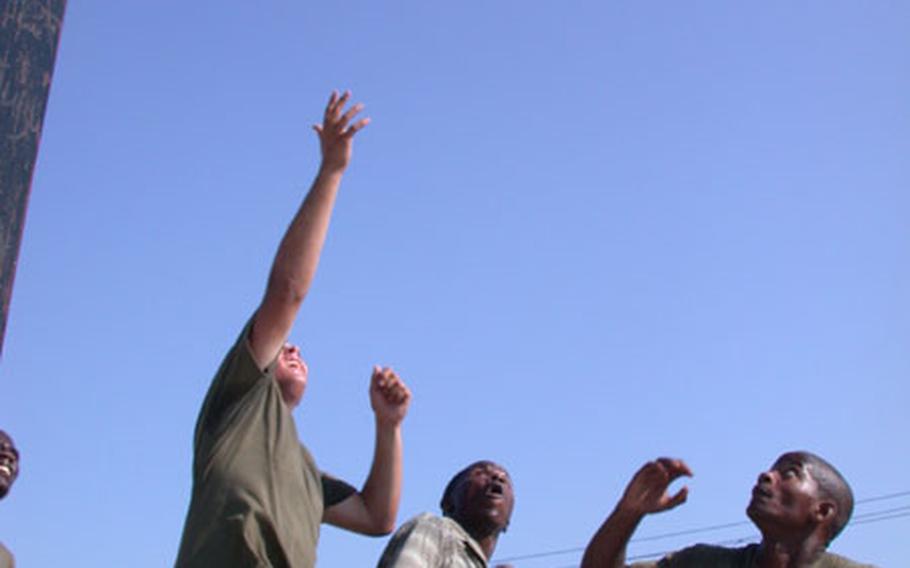 U.S. Marines with 3rd Battalion, 8th Marines played a mean game of basketball with Haitians looking to have a little fun with the Americans. (Sandra Jontz / S&S)

Well, the Haitian basketball players said they&#8217;d won Friday&#8217;s game and the Marines answered the same way. In the end, it wasn&#8217;t about winning, but bringing the two together &#8212; on the basketball court, without flak vests and weapons.

Marines from 3rd Battalion, 8th Marines not only took to the court for Friday&#8217;s community relations event in the fairly affluent Clersin neighborhood, but also passed out drinking water and set up a makeshift health clinic out of the back of a military ambulance.

In spite of the area&#8217;s relative affluence, residents still are in need of medical treatment, military officials said.

And its residents are skeptical of the coalition military operations.

&#8220;From the people we talk to, we&#8217;ve been told this is a pro-Aristide area. He built the basketball court and used to visit during his presidency,&#8221; Army Sgt. Justin Williams of Company B, 9th Psychological Operations Battalion, said of ousted president Jean-Bertrand Aristide.

One Haitian asked why American and French troops were killing hundreds of Haitians &#8212; reports he had heard on local radio broadcasts.

The game was not pre-announced, for fear of possible ambushes, so the PsyOps team patrolled the area around the park calling for children and adults to come take on the Americans in a basketball game.

There was little worry that there wouldn&#8217;t be any takers, especially children.

&#8220;For some reason they pop up out of holes, like gophers,&#8221; joked Army Spc. Roowdolf Charles, a Haitian-American fluent in Creole.

Haitian players hesitated at first, mainly because most were clad in sandals. But those with sneakers either joined in the fun or swapped shoes so others might play.

Soon, teams sprouted and they took to the courts. But without a scorekeeper.