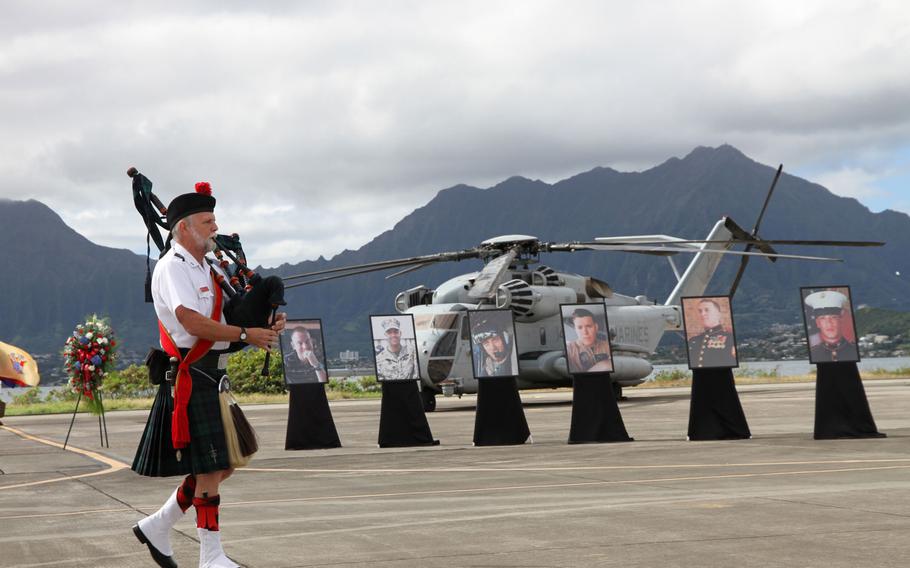 Buy Photo
A bagpiper plays 'Amazing Grace' on Jan. 22, 2016, during a memorial at Marine Corps Base Hawaii for 12 Marines killed Jan. 14 when their helicopters crashed north of Oahu. In the background are photos of six of the Marines, whose remains have not been found. (Wyatt Olson/Stars and Stripes)

None of the 12 Marines who died in the Jan. 14 crash have been recovered, Marine Corps spokesperson Capt. Cassandra Gesecki said in a written statement.

The Star-Advertiser in Honolulu reported Monday that “some remains” had been retrieved, attributing the information to Timothy Irish, the Marine Corps captain who served as the primary Marine media contact during the five-day search for the missing Marines.

In Gesecki’s clarification, she wrote that “trace elements of remains” in the form of DNA were recovered during the search-and-rescue phase that ended on Jan. 19.

“Nothing in addition to the trace elements of DNA have been found since then,” she said.

Families of the Marines who had been identified through DNA have been informed, Gasecki said.

“In order to respect the families while the recovery effort continues, we will not go into further details about what was found at this time,” she said.

The USNS Salvor and Mobile Diving and Salvage Unit One are using remotely operated underwater vehicles to “search, assess and survey” the crash site to further identify and map the debris field as sea conditions permit, Gesecki said.

“Recovery and salvage operations can take several months to complete, but can be extended based on several factors, including the size of the debris field and other environmental factors,” she said.

The debris field from the two CH-53E helicopters is about two miles offshore from Waimea Bay, strewn in an area roughly 300 feet beneath the surface. High winds and waves are common in the North Shore during the winter months.

The crash investigation is being led by the 1st Marine Aircraft Wing.