Marines save pogs for Okinawa dogs 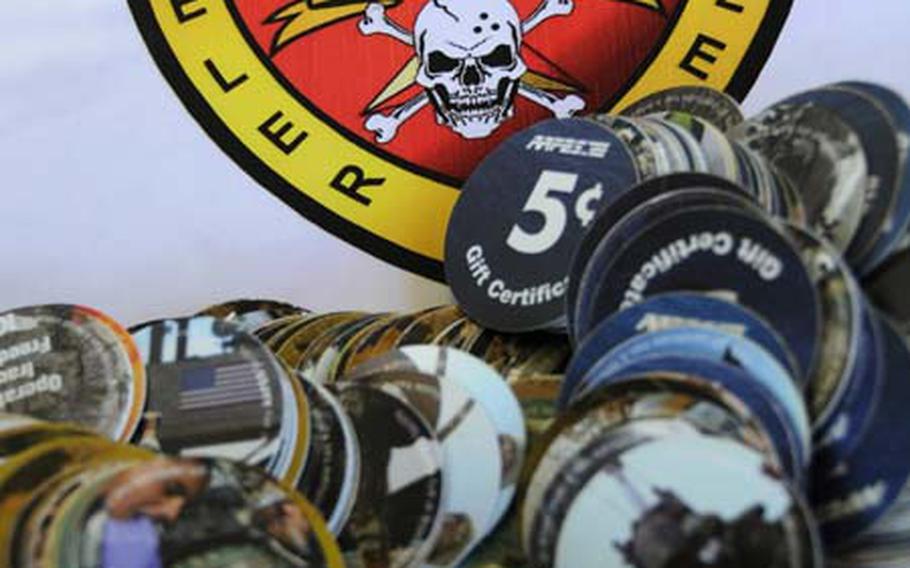 CAMP COURTNEY, Okinawa &#8212; Being deployed to Anbar province in Iraq hasn&#8217;t stopped 3rd Reconnaissance Battalion from supporting a charity back on Okinawa.

The unit, which is home-based at Camp Schwab, donated more than $250 in nickel, dime and quarter pogs to the Okinawan-American Animal Rescue Society. Pogs are the cardboard currency used by the Army and Air Force Exchange Service in Iraq and Afghanistan in lieu of heavier metal coins. They can be redeemed for cash at AAFES facilities.

OAARS appreciated the unit&#8217;s donation, "especially when they are facing dangerous conditions and are far away from their families," Lori Barker, OAARS president, said Thursday in an e-mail to Stars and Stripes.

Battalion Sgt. Maj. Kenneth C. Pickering "pitched the idea of raising money for OAARS" to the battalion&#8217;s chaplain, Lt. Jeff Parks, in the first week of the unit&#8217;s deployment, Pickering said in an e-mail from Iraq.

Deployed servicemembers receive countless care packages from others, so "it just feels good to give back to something worthwhile like OAARS," Pickering said. The nonprofit rescues stray and abandoned dogs and cats.

Thus, the "Pogs for Dogs" fundraiser started. Parks placed the donation box in a high-traffic area &#8212; by the coffee pots next to his office.

"It was truly amazing to see how fast" the Marines&#8217; and sailors&#8217; cardboard change added up," Pickering said.

"We always say support our troops, but then they turn around and support an issue so important to many people here," said Mady Pickering, who volunteers at the shelter and received the package of pogs from her husband.

The Marines deploy with a warrior mindset, "but still they show their tender side," she said. "It shows they have their hearts in the right place."