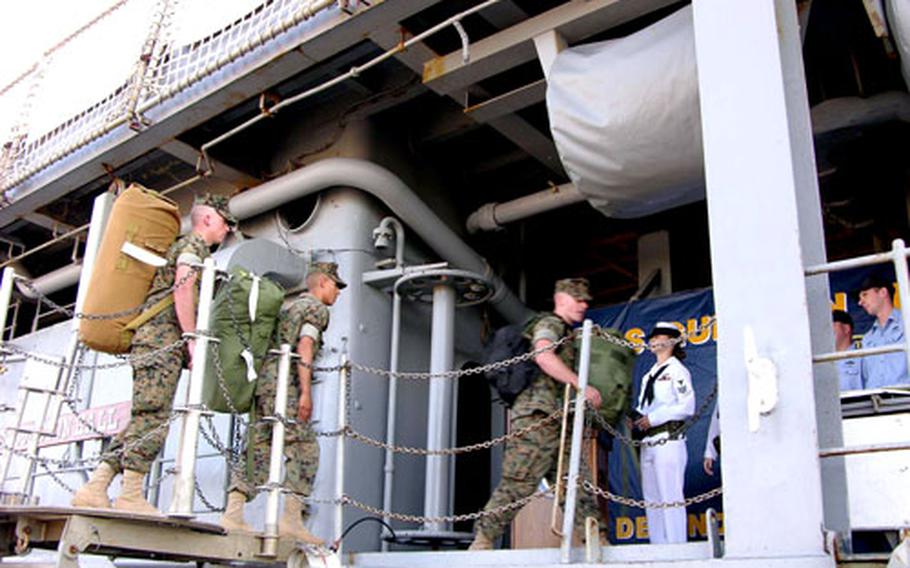 The Marines, from 1st Battalion, 8th Marine Regiment, along with platoons of Spanish marines and Italian naval infantry, will be working with troops from Ghana, Senegal and Guinea as part of the U.S. European Command&#8217;s ongoing effort to help stabilize the region.

About 140 troops are participating in the land training.

The troops are being transported to the African coast aboard the USS Gunston Hall, which is based in Virginia Beach, Va., as well as a high-speed Swift vessel. The coalition rendezvoused in Spain and is expected to take up to five days to reach Guinea. The sailors will be training offshore with the African troops, said Maj. Ryan Gutzwiller, commander of the coalition force.

While the command unit is a mix of Marines, the rifle platoon has been busy. It spent part of September on the Gulf Coast rescuing victims of Hurricane Katrina, recovering bodies and passing out food, Gutzwiller said. In 2004-2005, the platoon served a seven-month tour in Iraq.

This is the platoon&#8217;s first mission in Africa, Gutzwiller said. After disembarking in Guinea, the Marines will move about the region using boats and convoys of tactical vehicles.

The Marines plan to train the African forces on tactics in river combat, ambush, counterambush, patrol and defense. In exchange, Gutzwiller said, the Marines will be learning jungle survival skills from the African troops.

They also hope to pick up lessons from their coalition partners.

The mission, called West African Training Cruise 06 (WATC 06), is a scheduled exercise that has been conducted since 1978.

Gutzwiller said the biggest risks are expected to be medical rather than from potential enemies.

&#8220;Probably the biggest thing is to just conduct our exercises safely,&#8221; Gutzwiller said. &#8220;We&#8217;ve done a lot of heavy-duty, risk management assessments to mitigate risks &#8212; taking anti-malarial drugs, training people to take care of themselves and stay healthy in a subtropical environment.&#8221;