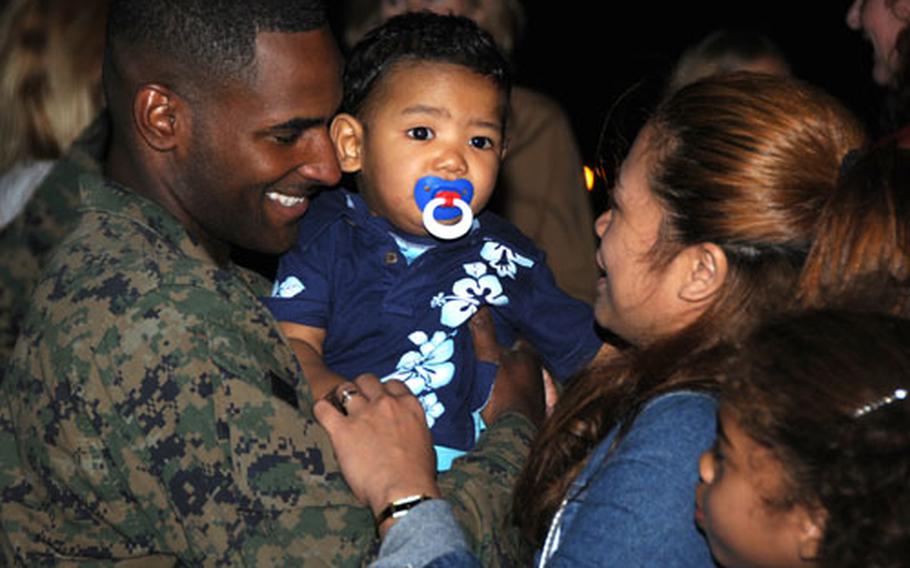 A 3rd Marine Division servicemember greets his family Wednesday at the Camp Courtney Chapel after returning to Okinawa from a nine-month deployment to Afghanistan. (Cindy Fisher / S&S)

A 3rd Marine Division servicemember greets his family Wednesday at the Camp Courtney Chapel after returning to Okinawa from a nine-month deployment to Afghanistan. (Cindy Fisher / S&S) 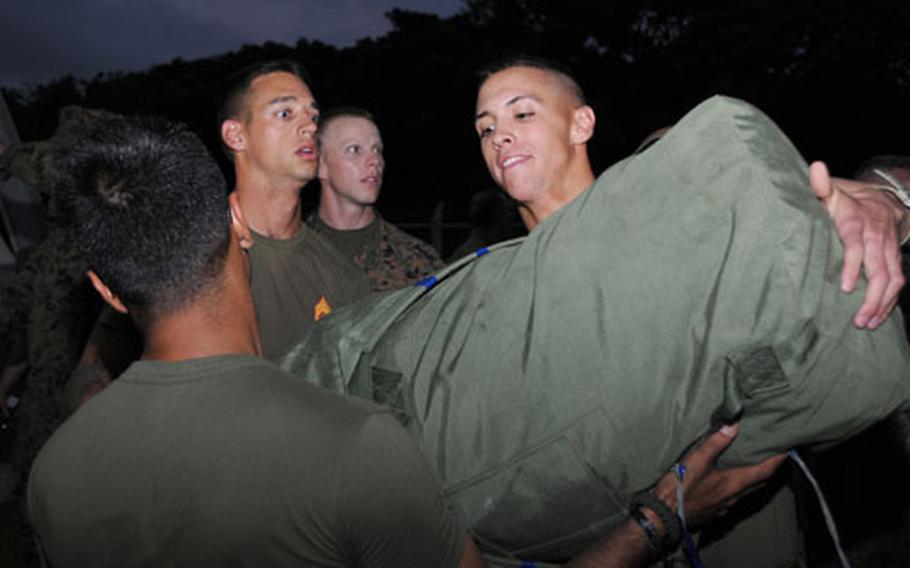 Petty Officer 3rd Class Michael Vigo, right, a corpsman with 3rd Marine Division, passes a seabag down a line to offload a truck Wednesday on Kadena Air Base, Okinawa. Vigo and more than 80 other division Marines and sailors returned Wednesday from a nine-month deployment to Afghanistan. (Cindy Fisher / S&S) 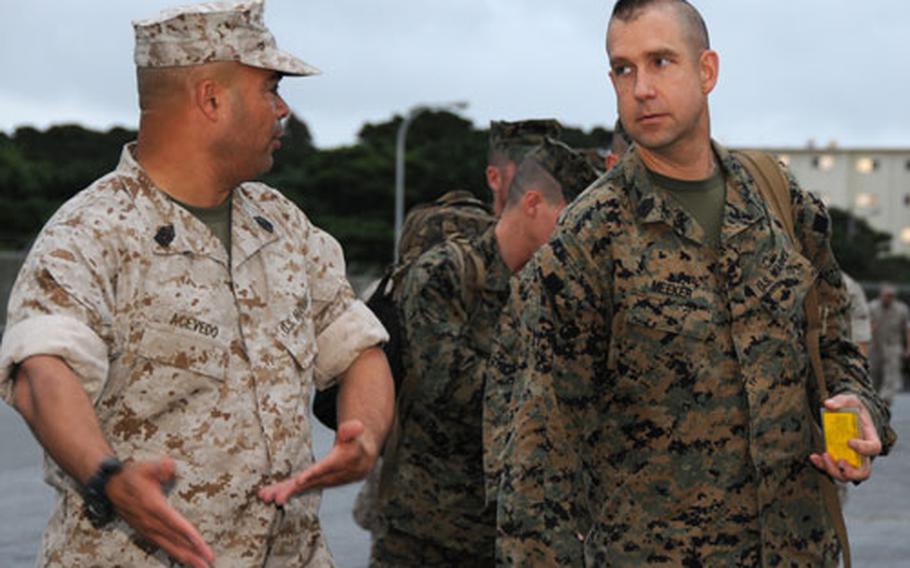 KADENA AIR BASE, Okinawa &#8212; More than 80 Marines and sailors from units throughout the 3rd Marine Division returned Wednesday evening from a nine-month deployment to Afghanistan.

They were the last of a detachment of about 135 troops who were attached to the Regional Corps Advisory Command in Afghanistan, said Lt. Col. Don Carrier, with 4th Marine Regiment, 3rd Marine Division, who returned with the first group in March.

The advisory command is part of the Combined Security Transition Assistance Command&#8211;Afghanistan.

During their tour, the troops served as advisers to the Afghan National Army&#8217;s 201st Corps based in Kabul.

This presented some challenges, he said.

The Afghan officers were mostly very experienced, many having served in previous Afghan militias, but that was not the case with their troops, Carrier said.

He saw Afghan sergeants major with only four or five years of military experience, he said. This is due in part to the relative newness of Afghanistan&#8217;s army, he said.

With the 201st, the Marines taught Afghan officers how to develop their own NCOs, which in turn benefited the U.S. troops, Carrier said.

At the lower levels, in the platoons and squads, enlisted Marines &#8220;were more involved in combat operations on a daily basis,&#8221; Carrier said.

They didn&#8217;t just teach how to operate weapons systems, they also showed Afghan soldiers the tactics used to employ weapons in a combat situation, he said.

&#8220;It was a rewarding experience &#8212; the opportunity to interact with other countries and the Afghan National Army,&#8221; said Staff Sgt. Zeb Hervy, of 12th Marine Regiment.

&#8220;The first month was hard because we did not know each other,&#8221; said Gunnery Sgt. Jaunito D. Juliano of Headquarters Battalion, 3rd Marine Division, explaining that a bond was developed. &#8220;You have to earn respect with them.&#8221;

And the Afghans earned the respect of the Americans, Carrier said.

Instead of just going out and fighting, the Marines taught their counterparts to think about being able to sustain combat operations and the need to resupply logistics, he said.