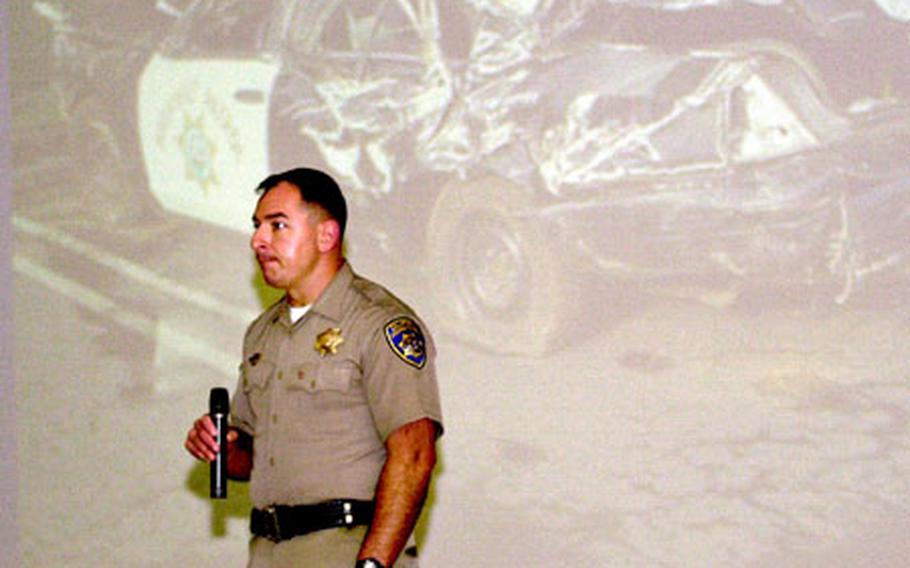 California Highway Patrol Officer Jeff Walker, who is a Marine Reserve gunnery sergeant, stands in front of a slide showing a wrecked CHP patrol car as he talks with Marines and sailors from various units within 3rd Marine Logistics Group in the Camp Hansen theater on Thursday. (Fred Zimmerman / S&S)

While this may conjure images of troops navigating Okinawa&#8217;s mountainous terrain on horseback, it actually is safety training geared toward getting them in the right mind-set after coming back to work after the holidays.

Following those classes each day, Toles said, the Marines and sailors headed back to their units for follow-up training on water safety, operational risk management, individual training standards and deterrence of human trafficking.

&#8220;You get pre-holiday training, then you get the &#8216;beat the blues&#8217; training during the holidays. This is nothing more than normal training to re-orient [the Marines and sailors] back to their work areas.&#8221;

To help drive home traffic-safety messages, 3rd MLG brought in a California Highway Patrol Officer Jeff Walker. Walker, a Marine Reserve gunnery sergeant in the Individual Ready Reserve, said he jumped at the chance to come to Okinawa when volunteers were requested.

Walker was to give seven presentations in four days while on Okinawa, he said.

&#8220;I talk about everything from vehicle maintenance to [driving under the influence] and everything in between,&#8221; Walker said.

Walker added that his talks on driving safely and the dangers of impaired driving could have a greater impact since they are coming from outside the chain of command.

He said he incorporates experiences from his job &#8212; including several stories of fellow officers killed by drunk drivers &#8212; to get his points across.

Walker also played a graphic film showing footage from fatal traffic accidents to emphasize the need to slow down and drive safely.

Toles said the 3rd MLG training is going well, and it&#8217;s not limited to the week&#8217;s sessions. He said commanders have been supporting an aggressive safety campaign over a longer term.

Toles said during the first quarter of last year the battalion had about 50 of what it terms &#8220;mishaps.&#8221; So far this year, he said, there have been only two.