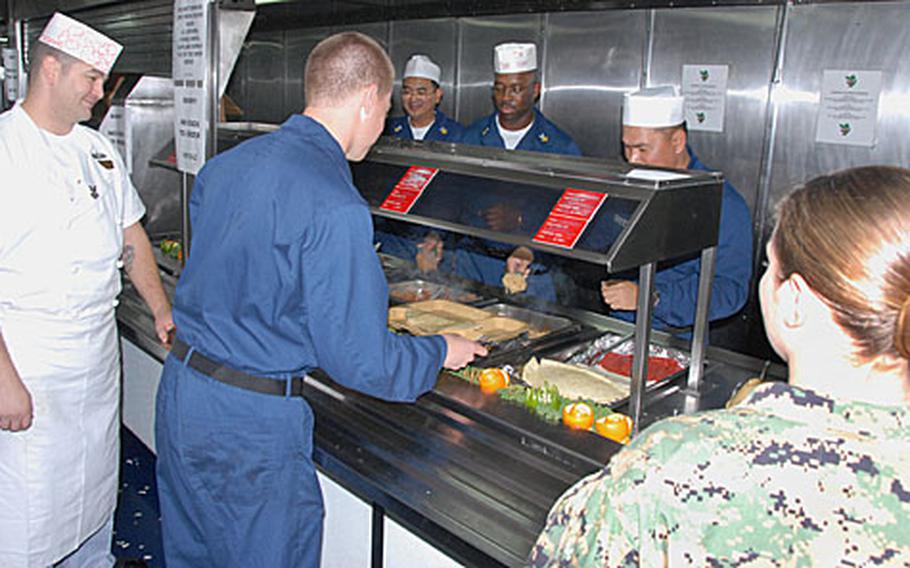 Petty Officer 2nd Class Dennis Adams, left, a culinary specialist on the USS Harpers Ferry, looks on as sailors and Marines get dinner Saturday. The ship has to double and sometimes triple the amount of food made when Marines are onboard. (Megan McCloskey / S&S)

There&#8217;s a long rivalry between sailors and Marines. But when the services deploy together on amphibious ships like the USS Harpers Ferry, the rivalry gets left at the pier.

And with the Marines comes a change in atmosphere.

&#8220;Each time a new group comes in they bring a new lifestyle to the ship,&#8221; said Petty Officer 2nd Class Dennis Adams, a culinary specialist.

Marines from the 31st Marine Expeditionary Unit and the Sasebo-based sailors are often deployed together in the Pacific, sometimes for short excursions &#8212; like a jaunt last week from Okinawa to Iwo Jima for the 62nd anniversary commemoration of the World War II battle &#8212; and other times for months.

At first, the tables at the mess are separated by green and blue, but eventually the two groups end up hanging out with each other.

During a seven-month deployment to the Persian Gulf in support of the Iraq war, &#8220;we ran out of things to say to each other, because everyone knew everything,&#8221; Eck said.

The ship also gets louder.

And sailors say the food gets better when the digital cammies show up.