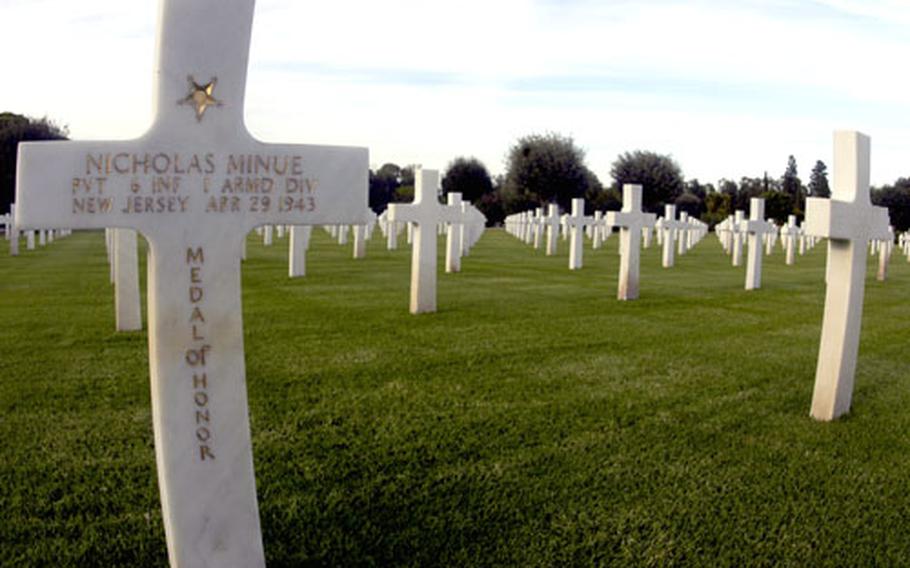 Among the sea of 2,841 white marble crosses and stars of David at the North African American Cemetery in Carthage, Tunisia, is that of a Medal of Honor recipient, Army Pvt. Nicholas Minue. He was awarded the nation&#39;s highest military honor for charging an enemy entrenched position with fixed bayonet on April 28, 1943, near Medjez-el-Bab, Tunisia. (Sandra Jontz / S&S) CARTHAGE, Tunisia &#8212; Marine Cpl. Mark Smith chose to visit a cemetery during a port visit in Tunisia on Friday.

&#8220;My grandfather was in World War II, and I felt that I could pay respect to him and his comrades by coming to see this today,&#8221; the 21-year-old whispered as he meandered amid the 2,841 white marble grave markers at the North African American Cemetery in Carthage.

This year&#8217;s Veterans Day observance in Tunisia was postponed until Friday so that sailors and Marines from the big-deck amphibious dock landing ship USS Whidbey Island could take part as their ship made a stop on its way home to Virginia after a deployment of more than five months.

While the visitors paused Friday at the pristine cemetery to remember the dead and missing, David Ballard, deputy chief of missions at the U.S. Embassy in Tunisia, said they also should reflect on those now serving in the military, especially at a time of war.

If the visitors take anything away from their tour, Superintendent Michael Green asked it be a desire to tell all they know of the 27-acre cemetery, near the site of the ancient Carthaginian city destroyed by the Romans.

The assault on North Africa in World War II was overshadowed by follow-on &#8212; and bigger &#8212; missions, Green said, and too few Americans today know of the cemetery honoring Americans buried there, or the names of those missing in action etched along the 364-foot limestone wall.