Marines with India Company, 3rd Battalion, 3rd Marine Regiment, take a break on Aug. 3, 2018, at the Jungle Warfare Training Center in Okinawa, Japan. They're wearing their test Marine Corps combat utility uniforms. The new uniforms and boots are supposed to be lighter and faster to dry. (Tyler Ngiraswei/U.S. Marine Corps)

Marines with India Company, 3rd Battalion, 3rd Marine Regiment, take a break on Aug. 3, 2018, at the Jungle Warfare Training Center in Okinawa, Japan. They're wearing their test Marine Corps combat utility uniforms. The new uniforms and boots are supposed to be lighter and faster to dry. (Tyler Ngiraswei/U.S. Marine Corps) 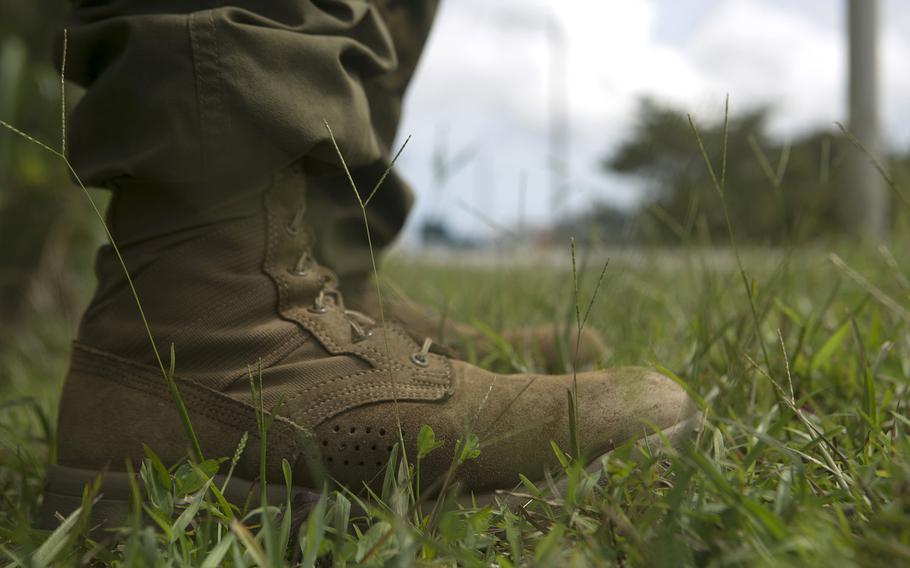 Pictured is one of the boots being tested by the U.S. Marine Corps. Marines with India Company, 3rd Battalion, 3rd Marine Regiment, flew from Hawaii to Okinawa, Japan, to test the new boots and Marine Corps combat utility uniforms at the Jungle Warfare Training Center. (Tyler Ngiraswei/U.S. Marine Corps)

While their official hymn touts Marines fighting in “ev’ry clime and place” they could tote their guns, the Corps is rolling out a lightweight uniform designed for one particular climate, where grunts are expected to be hot and heavy in the coming years — humid tropical jungles.

Initial samples will be due by the end of March for 60 days of testing, with the first 2,600 uniforms expected by late June 2019, Hamby said in an emailed statement. The Corps is prepared to purchase more uniforms as 2019 funding becomes available, the statement said.

The tropical uniform, which has been described as “like pajamas,” is based on the same design as the current Marine Corps combat utilities but made of a lighter material designed to dry faster and keep Marines cooler.

While the fabric is about 30 percent lighter than current utilities, it’s just as durable as the material currently in use, officials said. The knees, elbows and groin areas will be reinforced to guard against abrasions in rocky, mountainous terrain, officials have said.

The Marine Corps began testing new materials less than a year after Marines at Okinawa’s Jungle Warfare Training Center, or JWTC, complained in 2012 that their normal uniforms rarely dried out during training there, the systems command’s Mark Richter said in a June 2013 statement.

Developed over about the past five years and tested by hundreds of Marines in Hawaii and Japan, including during training at JWTC, the new uniform comes as the service revamps its presence in the Pacific, already its largest command.

The service has been stepping up the size of its rotations to Australia’s tropical Northern Territory, while shifting thousands of troops away from Okinawa to other locations in the region.

An $8.7 billion overhaul on Guam is underway as about 4,000 Okinawa-based Marines are expected to relocate there in the mid-2020s. More than 1,000 others will be sent to Hawaii.

The lightweight uniforms will be available first to Marines slated to deploy or already stationed in tropical climates, the Corps said, and issued for contingency operations and training in tropical environments. It will not be part of a Marine’s general issue.

“The tropical uniforms are also expected to be certified for sale at Marine Corps Exchanges as individual purchase for field use only,” Hamby said.