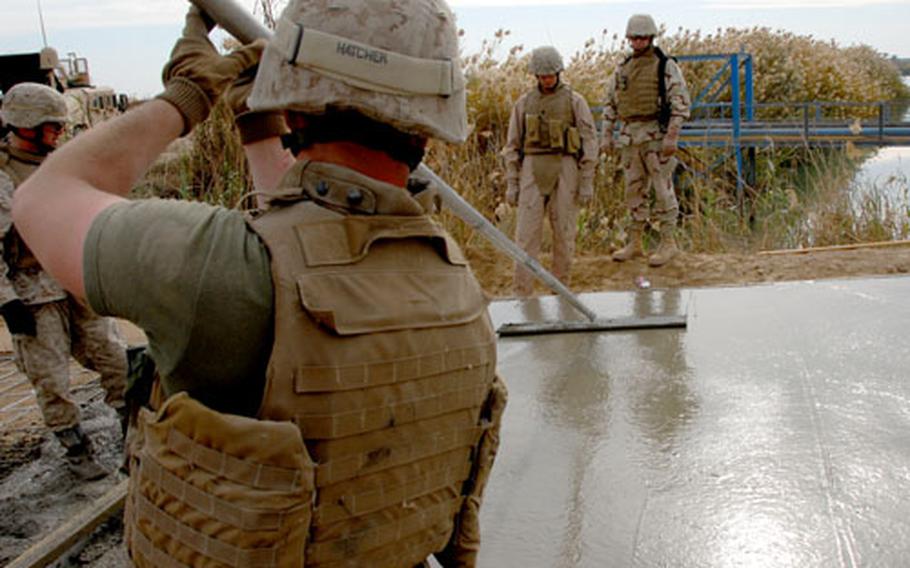 Lance Cpl. Tyler Hatcher, 22, a reservist with Company B, smooths out concrete Friday for a new road. The 9th Engineer Support Battalion was tasked with paving the road — originally just dirt — to make it tougher for insurgents to plant improvised explosive devices in it. (Megan McCloskey / S&S)

Lance Cpl. Tyler Hatcher, 22, a reservist with Company B, smooths out concrete Friday for a new road. The 9th Engineer Support Battalion was tasked with paving the road — originally just dirt — to make it tougher for insurgents to plant improvised explosive devices in it. (Megan McCloskey / S&S) 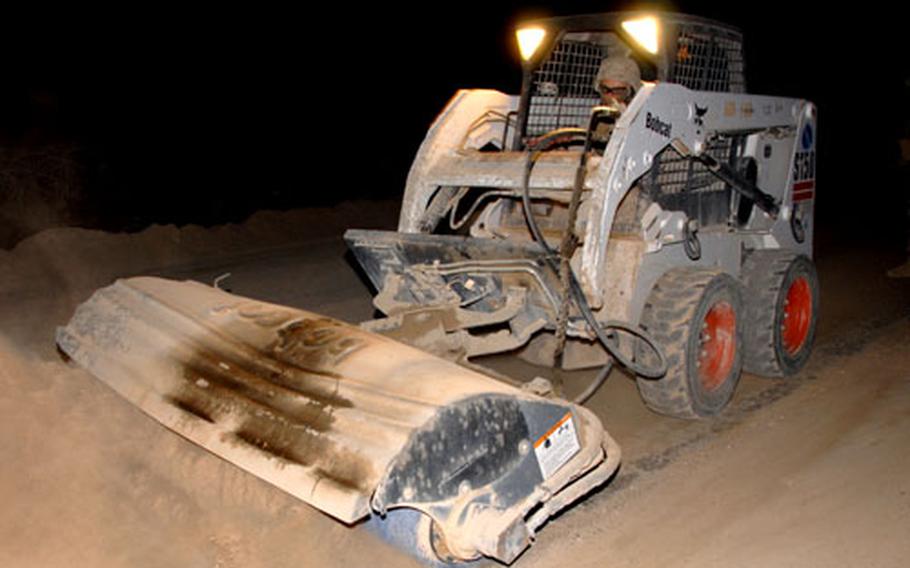 Marine engineers operate a bobcat Sunday during a mission to rid a stretch of major highway of hardpacked dirt, which is used by insurgents to hide improvised explosive devices. (Megan McCloskey / S&S) 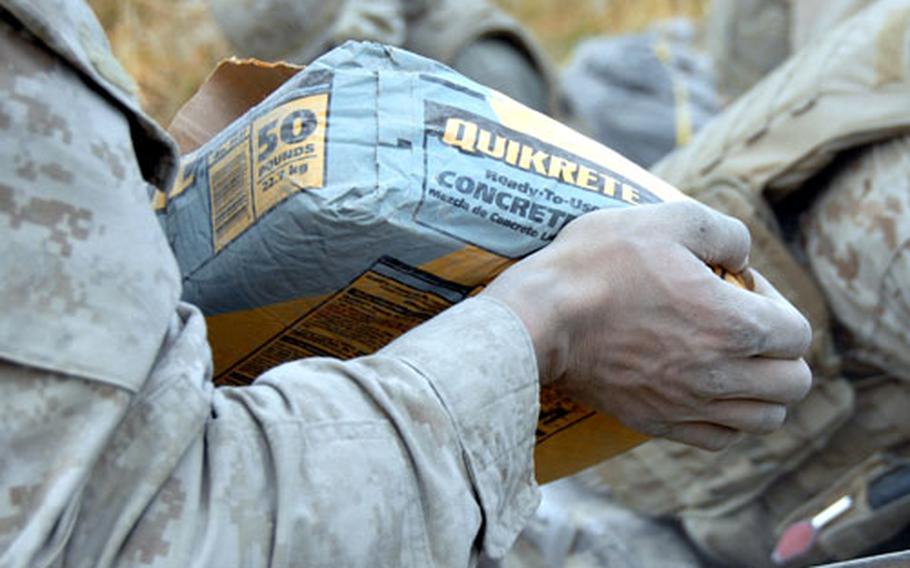 CAMP TAQADDUM, Iraq &#8212; Dirt: not something one normally thinks of as a serious hazard.

But in Iraq, where improvised bombs often rule the roadways, dirt presents a dangerous opportunity for insurgents. It&#8217;s an all too convenient hiding spot for roadside bombs.

Recently, the Marines with 9th Engineer Support Battalion were called out for two projects in Anbar province to take that option away from the insurgents. Just northwest of Fallujah, a key route to cross a canal was simply a dirt road &#8212; and a major hotspot for improvised explosive devices. So the Marines turned it into a 300-foot-long, concrete roadway.

&#8220;When we first came it was kind of a crappy road,&#8221; said Lance Cpl. Ben Martin, a reservist with Company B, 6th Engineer Support Battalion, 4th Marine Logistics Group, which is augmenting the 9th ESB in Iraq.

The 20-year-old from Osceola, Ind., said it was the first time the unit had built an entire road and done so much concrete work.

&#8220;It&#8217;s quite an undertaking,&#8221; said Chief Warrant Officer James Spencer, of Engineer Support Company, 9th ESB. He added the unit is designed for slightly smaller projects. They had to borrow some Navy equipment to get the six-day job done.

In addition to laying concrete over the dirt, they put footers down the sides of the entire stretch of the road.

&#8220;That prevents insurgents from digging down underneath and putting a [bomb] under the concrete,&#8221; Spencer said.

Meanwhile, 9th ESB Marines tackled another dirt-related project Saturday night on a main highway that runs from Baghdad to Syria.

A stretch of the 4-lane thoroughfare near a bridge is particularly troublesome. Three Marines from Camp Pendleton were killed there last week by a roadside bomb, and a couple of months ago a suicide car bomb blew a large gap in the bridge.

In that area, hard-packed dirt completely obscured the asphalt of both lanes in one direction and one lane in the other.

The mission was unique for the 9th ESB Marines. Instead of road clearance, where they search out bombs &#8212; or road repair, where they fix holes that could be used to hide explosives &#8212; they essentially swept the highway clear of the dirt, dumping most of it in a ditch off the road.

&#8220;We want to expose the asphalt so there are clear lanes of travel and so the insurgents can&#8217;t place anything on it,&#8221; said Chief Warrant Officer Bruce Broaddus, of Company B.

The trick was getting the last layer of dirt off the road.