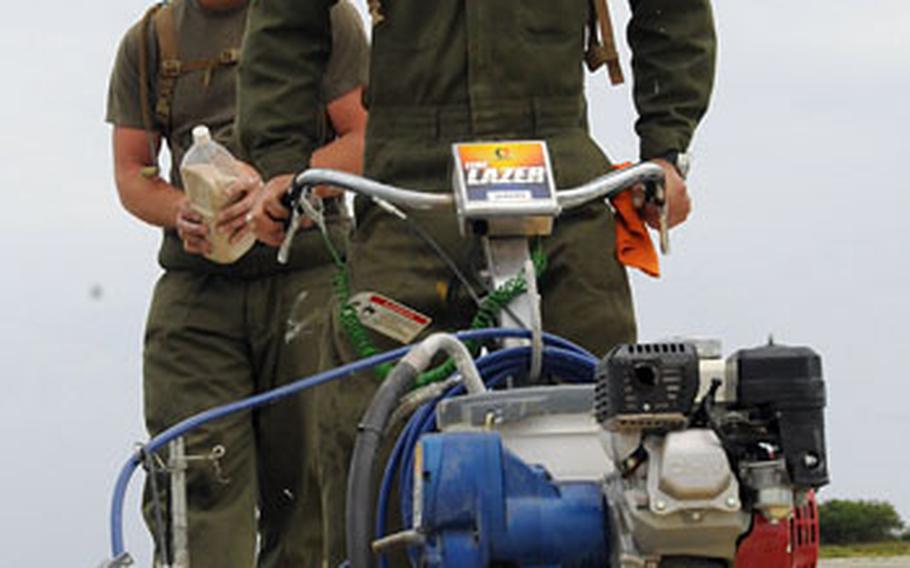 IE SHIMA, Okinawa &#8212; After being rained out for several days, Marine Wing Support Squadron 172 was back to work this week to reconfigure an aircraft landing pad on this tiny island.

The pad originally was configured as an older LHA amphibious assault ship deck. The new design will make the landing site the only mock LHD landing pad in the Pacific where Marine Corps Harrier pilots can practice vertical and short takeoffs and landings on a mock ship deck before doing it for real, Killebrew said.

About 50 Marines have spent the past month building the pad with nonskid matting pads. The pads are 6 feet by 12 feet, each weighing about 150 pounds, and are interlocked in a brickwork-like pattern to create the landing surface.

That makes the project a physically demanding job, said Cpl. Manuel A. Guerrero IV, an expeditionary airfield specialist, noting that the finished pad was to have a landing surface of about 30,000 square feet.

Seabees with Naval Mobile Construction Battalion 40, based in Port Hueneme, Calif., and deployed to Okinawa for eight months, have been building up the ground with crushed coral to create a level surface for the Marines, said Lt. j.g. Walter Ear, the officer in charge of the Seabees. In some places, coral has been built up four or five feet, he said.

Working with coral is no easy task, Killebrew said.

The coral must be compacted to bear weight and prevent runoff when it rains, he said. Marines also have to pound 6-foot stakes into the compacted coral to hold the matting down &#8212; a process that can take anywhere from five minutes to two hours per stake, Killebrew said.

The entire project was to be completed by week&#8217;s end, Killebrew said, adding that helicopter crews also will use the site for training.