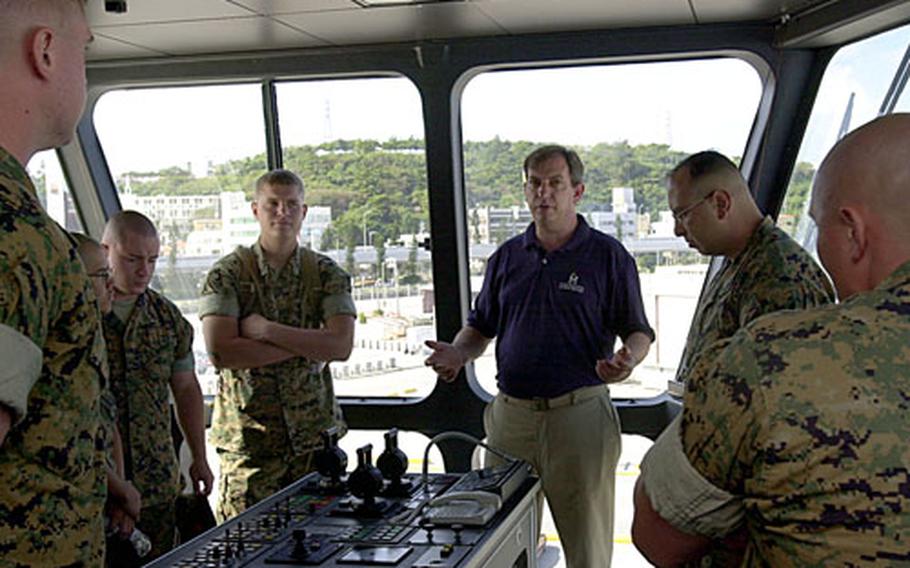 After a ceremony marking the fifth anniversary of WestPac Express’ support of III Marine Expeditionary Force, Karl Keller, second mate in navigation, explains the capabilities of the mooring station on the bridge while the high-speed vessel was moored at Naha Military Port on Monday. (Cindy Fisher / S&S)

NAHA, Okinawa &#8212; The III Marine Expeditionary Force has contracted the WestPac Express, a high-speed transport vessel, for another five years, military officials said Monday during a ceremony marking the vessel&#8217;s fifth year of service to the III MEF.

Third MEF leaders began looking for an alternate transportation option in 2000 due to competition with other services for U.S. Navy assets in the area, said Maj. Gerry Griffin, the III MEF strategic mobility officer.

The answer was to lease a catamaran-type vessel from a commercial entity.

Austal Ships custom-designed a vessel that fit specific requirements, such as the ability to transport an infantry battalion and equipment in one lift and to operate from austere ports without the use of tug boats, Griffin said.

The WestPac Express, which was built in Mobile, Ala., arrived in Naha for service July 11, 2001. It is the only ship of its type in use by the Marine Corps, he said.

The vessel accommodates more than 950 servicemembers and 550 tons of equipment at a sustained speed of 36 knots, according to Austal Ships.

Talleri touted the ship&#8217;s capabilities by citing a recent journey in which the ship transported 890 Marines, 63 vehicles and 23 containers of baggage and equipment in one lift. It would have required 16 C-17 aircraft to complete the same mission, he said.

The WestPac Express operates from Okinawa and is ideally situated for travel to South Korea, mainland Japan and the Philippines, said Karl Keller, the ship&#8217;s second mate in navigation.

Contracted exclusively to III MEF, the WestPac Express is primarily used for transport to training exercises, though the vessel also has assisted in humanitarian-assistance operations such as the 2005 tsunami relief efforts, Keller said.