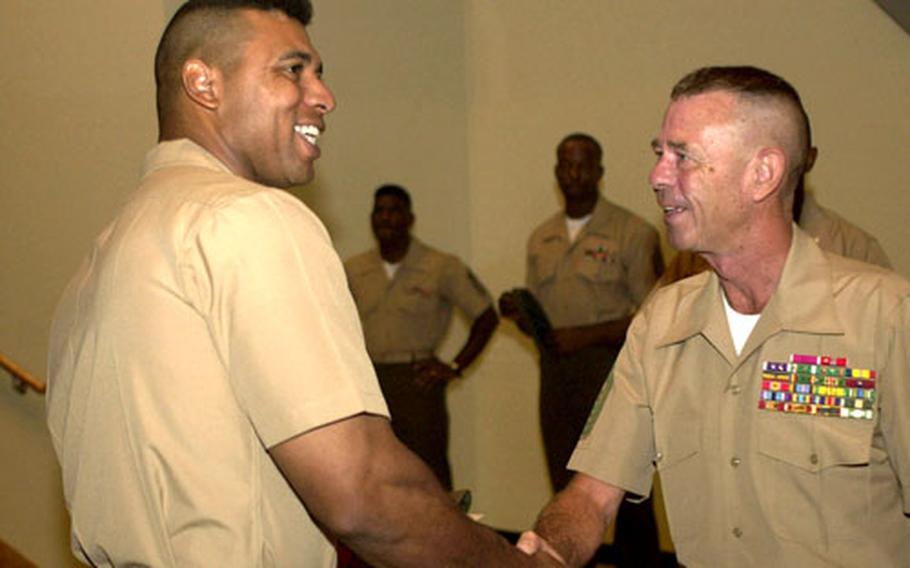 CAMP FOSTER, Okinawa &#8212; Marines and sailors from 3rd Transportation Battalion gathered at the Camp Foster Community Center on Friday morning to remember fellow servicemembers who have yet to return home from the battlefield.

The ceremony was held on National POW/MIA Recognition Day. Before the event, a video was shown detailing the hardships of numerous prisoners of war. The men on the video, POWs from World War II through Vietnam, talked about how poorly they were treated, how sick they were, how much weight they lost and how they&#8217;d eat any crawling thing they could get their hands on.

After the ceremony began, Col. Doarin Lewis, battalion commanding officer, spoke briefly with his unit and guests. He brought the unit together, he said, to honor the sacrifices of the thousands of POW/MIA servicemembers.

Said the unit&#8217;s sergeant major, Michael Johnson: &#8220;Take a moment to reflect on the sacrifices our brothers and sisters have made for our country.&#8221;

Gorczewski said his father then fought with freedom fighters in his native Poland, but again was captured and eventually liberated by U.S. forces.

Gorczewski also shared stories from his three tours and two extensions in Vietnam, including two stories about Marines who didn&#8217;t come home despite all efforts to find them.

He told how the body of a fellow Marine killed in a firefight was never recovered, despite a 1,000-troop operation to look for him.

He also spoke of a young officer he&#8217;d befriended. Wounded, the officer got all his men pulled into a helicopter hovering to evacuate them. But as the lieutenant was being lifted from the jungle, the cable snapped.

He never was found.

Gorczewski said that every day he sees young Marines in uniform he&#8217;s motivated by knowing they won&#8217;t forget those who never came home, and that an ongoing global mission to recover the missing will continue.