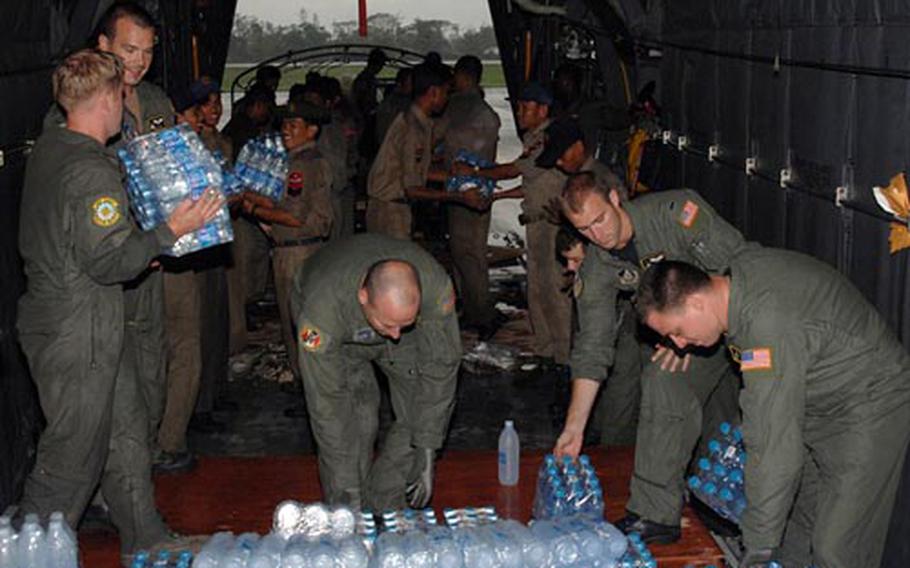 U.S. Air Force members from Yokota Air Base, Japan, assist people of Myanmar through the delivery of humanitarian relief supplies May 19. The U.S. military flew in 3.3 million pounds of relief supplies in the wake of a deadly typhoon that struck May 2. Most of the pallets were built and loaded by Marines with Combat Logistics Regiment 3 in Thailand. (Sonya Croston / U.S. Air Force)

U.S. Air Force members from Yokota Air Base, Japan, assist people of Myanmar through the delivery of humanitarian relief supplies May 19. The U.S. military flew in 3.3 million pounds of relief supplies in the wake of a deadly typhoon that struck May 2. Most of the pallets were built and loaded by Marines with Combat Logistics Regiment 3 in Thailand. (Sonya Croston / U.S. Air Force) 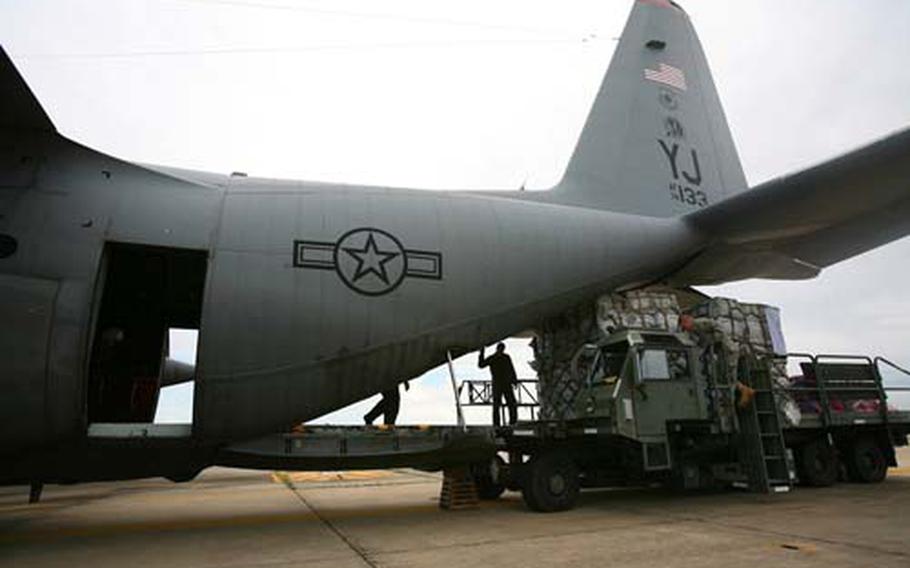 Airmen load disaster relief supplies at Utapao Royal Thai Navy Airfield May 12 for the first of 200 flights by U.S. forces to deliver relief supplies for victims of a deadly cyclone that struck Myanmar on May 2. Marines with Okinawa-based Combat Logistics Regiment 3 worked around the clock to load some 3.3 million pounds tons of supplies onto C-130 aircraft during the relief effort. (Eric D. Arndt / U.S. Marine Corps)

CAMP FOSTER, Okinawa &#8212; The Marines of Combat Logistics Regiment 3 departed here for the Cobra Gold military exercise with no idea they would end up helping provide relief to thousands of cyclone victims.

When Cyclone Nargis tore across Myanmar on May 2, the Marines were preparing for the start of the annual Cobra Gold in Thailand.

But it didn&#8217;t take the unit&#8217;s 240 Okinawa-based Marines &#8212; most of whom have returned &#8212; long to switch gears from a combat-training posture to relief mode, working around the clock to provide pallets of supplies for the support effort, dubbed "Operation Caring Response."

On May 12, after delays caused by the reluctance of the Myanmar government to accept international assistance, a U.S. Air Force C-130 loaded with relief supplies was allowed to land in Rangoon. It was the first of 200 relief flights delivering more than 3.3 million pounds of much-needed supplies that the U.S. military would send into the country to assist international organizations providing relief.

Much more could have been accomplished, U.S. military officials said. Myanmar denied offers to use long-range helicopters to distribute supplies to the hardest-hit areas of the country and refused the assistance of the 31st Marine Expeditionary Unit and the USS Essex Ready Group, which was diverted to international waters off the coast of Myanmar for more than three weeks.

However, the Okinawa-based members of CLR-3 never let politics get in the way.

"The mission was right up our alley," said Col. Chuck Chiarotti, the regiment&#8217;s commander, adding that supplies did reach cyclone victims and the U.S. troops provided a show of support.

"I&#8217;m not at all surprised that we were able to accomplish what we did," he said. "That&#8217;s the beauty of it. We were in the middle of inshore onload of a ship, when we were tasked to divert a slice of our capability to this effort, and we did it without missing a beat."

"When we started, there was an Army detachment there that was loading four to six pallets per day," he said. Each pallet contains about 5,000 pounds of supplies.

"We immediately went to 24-hour ops and loaded 16 to 32 pallets per day, supporting five flights per day, six pallets of supplies per flight," Reichert said. "At one point we built 54 pallets in four hours. Another time it was 71 pallets in five and a half hours."

"It could be frustrating at times," Reichert said. "On our end, we&#8217;d have stuff built up and ready to go and then at the last minute changes would be made, and we&#8217;d have to tear the pallets down and reload. For example, we had quite a bit of water to deliver in the beginning, and then we were told they had plenty of water and wanted us to send in some other supplies."

"What was really great was working with the Thai people &#8212; the guys working the forklifts and the like &#8212; and trying to deal with them in a different language," Cpl. Christian Irula, 24, said. "It was actually a lot of fun."

"The most difficult part was the language barrier, trying to work out hand signals," said Sgt. Dustin Letourneau, 22.

"This mission was different," Gunnery Sgt. Jerry Dominguez, 31, said. "This time we were more toward the rear of the mission. When we responded to disasters in the past, we were in the forward part &#8212; right in the middle of everything."

Dominguez had high marks for his Marines. "Any position we put them in, they were able to accomplish the mission," he said.

The mission is not quite over.

"There are still some Marines down there, making sure all the equipment gets on the ship and comes back," said Capt. James Warner, the unit&#8217;s operations officer. "Looking at the big picture of what these guys accomplished, they were able to overcome and adapt to everything that was thrown at them.

"They had to change themselves to fit in a different world, and these junior Marines &#8212; who are the backbone of the Marine Corps &#8212; really stepped up to the plate."