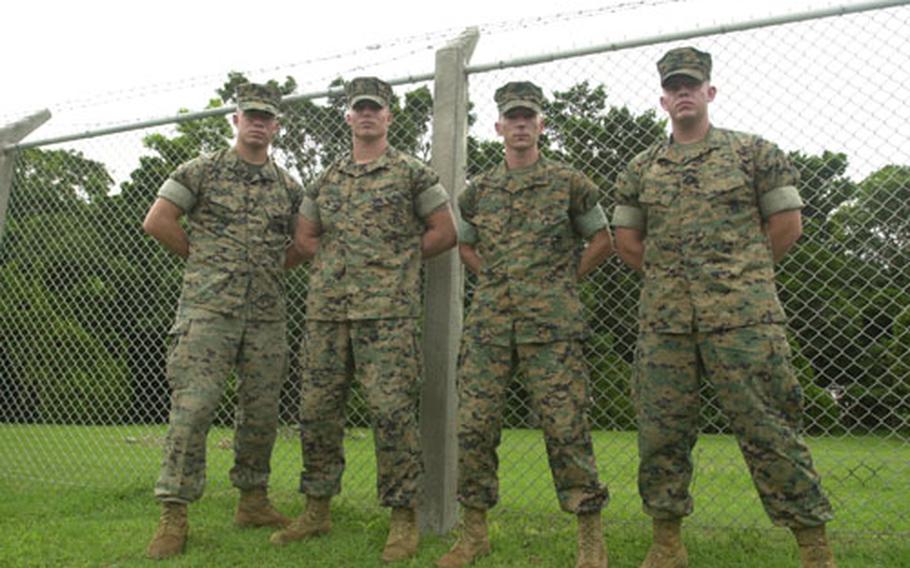 From left, Cpl. Thomas Joyce, Lance Cpl. Christopher Teague, Sgt. Richard Cline and Cpl. Michael Knight stand in front of one of the two fences they had to cross to get to the crash site of a CH-53D helicopter Aug. 13. The Marines from 1st Stinger Battery were in a formation when they saw the helicopter go down. Teague, first Marine on the scene, helped a pilot out of the wreckage just seconds before it exploded. (Fred Zimmerman / S&S)

Teague, the first Marine to respond to a helicopter crash just outside the base fence line, had pulled a pilot out of the burning wreckage of a CH-53D Sea Stallion; he was about 10 steps from the helicopter when it exploded.

Aug. 13 was a typical day for Teague and fellow Marines from the 1st Stinger Battery on Futenma. They were holding a 2 p.m. formation when they saw the helicopter go down.

More than 100 Marines instantly responded, said 1st Sgt. Darryl Sisneros. With no nearby gate, the Marines scaled an 8-foot fence inside their compound and a 15-foot fence to get off base to the crash site.

The two barbed wire-topped fences claimed their own victims. Sisneros said six Marines were hurt, most with cuts or twisted ankles. And one Marine fractured his foot.

A Marine public affairs officer said Wednesday that the 1st Stinger Battery commander was engaged in an exercise and could not be reached for comment.

The Marines ran about 500 to 600 yards to the crash site. Teague, first on the scene, said he saw a pilot in the helicopter, his left hand pinned. The rear of the helicopter was burning; Teague said he went to work to free the pilot.

As Teague struggled to free the pilot, Sgt. Richard Cline found another of the helicopter&#8217;s crew near the wreckage and learned three Marines had been in the aircraft when it crashed. Cline said he and three other Marines moved the crew member behind a wall and began shouting for the third Marine, whom they found kneeling on the ground away from the wreckage.

The pilot had been freed; Teague said he pulled him from the front window. Another Marine helped Teague carry the pilot to a nearby tree.

That&#8217;s when the wreckage exploded.

With all crew members away from the burning helicopter and transport to U.S. Naval Hospital Okinawa on the way, Cline ordered Marines to set up a security perimeter and direct traffic.

Cpl. Michael Knight arrived in time to help with security. He said he helped establish the perimeter because some local citizens were starting to gather and he wanted to ensure their safety by keeping them from the burning wreckage.

As those Marines kept the area clear, Cpl. Thomas Joyce entered the university administration building the helicopter clipped on its way down to ensure everyone had gotten out safely.

Sisneros said the Japanese police arrived quickly, as well as the fire department, which began dousing the flames with foam.

Sisneros said he knows the area well and was surprised there were no civilian casualties. &#8220;The pilot did an awesome job of controlling the aircraft,&#8221; he said.

Wednesday, all the wreckage had been cleared away; just one crew member remained in the hospital. And those who rushed to the rescue agreed they did only what other Marines likely would have done.