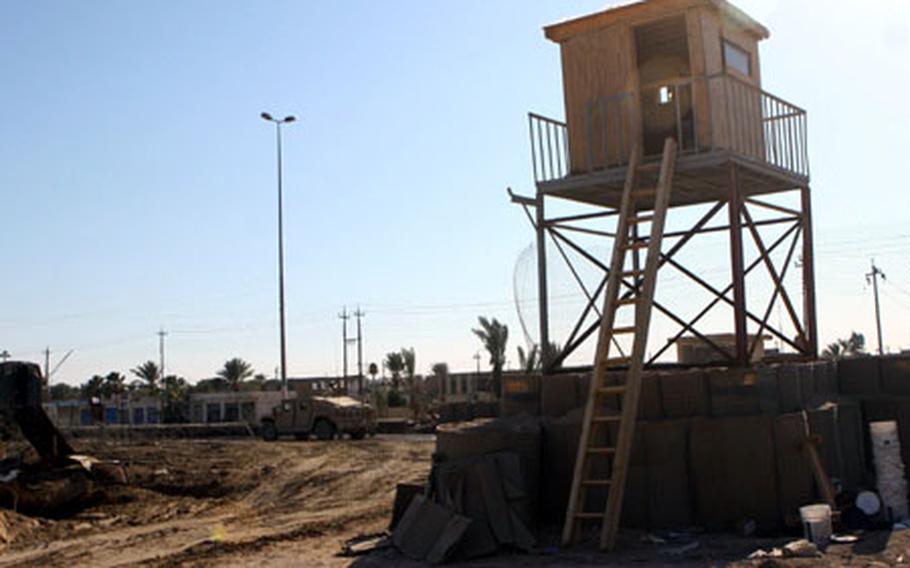 Iraqi police in Khalidiyah, Iraq, are preparing to move back into their station, which Marines from Okinawa worked to rebuild and make more secure. (Christopher Baldwin / Courtesy U.S. Marine Corps)

KHALIDIYAH, Iraq &#8212; Almost three years after being pushed out of Khalidiyah, the Iraqi police are getting ready to move back in.

The small town of less than 25,000, centrally located in Anbar province between Fallujah and Ramadi, has been overrun by insurgents for the past few years.

Police had been set up by coalition forces with weapons and money but not much else, said Army Maj. Gregory Atencio, with the 89th Military Police Brigade in Baghdad.

In the spring of 2004, insurgents gave the still shaky police force a warning: get out or suffer the consequences.

The police took off and the insurgents demolished most of the Khalidiyah police station with a car bomb.

There has been no police presence since then.

McCarthy&#8217;s team, from Regimental Combat Team 5, started rebuilding the police force in Habbaniyah in June. Khalidiyah will be the fourth station in the district to open.

To help the police maintain their ground, the 9th Engineer Support Battalion, 3rd Marine Logistics Group from Okinawa, Japan, was recently out there building up the security of the station.

Two teams of 10 Marines each from Company B worked in shifts for four days to build bunkers with ballistic glass, two watch towers and a tall wall of Hesco and concertina wire around the entire perimeter.

&#8220;When we strengthen the building like this, it gives them a firm base from which to operate,&#8221; McCarthy said.

&#8220;Police are security for the people and therefore represent all that is evil for the insurgents. Ridding the area of police allows them to rule.&#8221;

Obviously not keen to the idea of police moving back into the neighborhood, insurgents fired two rocket-propelled grenades and shot small arms fire at the worksite one day about halfway through the project.

None of the Marines were hit, but during the firefight an Iraqi woman was wounded in the crossfire.

The insurgents failed to slow the work of Company B, which is a Reserve unit with 6th Engineer Support Battalion in South Bend, Ind., that is augmenting the 9th ESB in Iraq.

But before work could even start on the station, military dogs had to be brought in to check for booby traps.

Habbaniyah has been turned over to the Iraqi army and is slowly coming under control, but insurgents ruled the streets for a long time and police aren&#8217;t eager to start work at Khalidiyah.

Cultivating good graces with a garden

The Khalidiyah police station is home to a garden.

Three families there grow herbs, including mint, basil and sage, and vegetables.

While making plans to rebuild the station, Iraqi forces said it wouldn&#8217;t be a good idea to block access to the garden.

The families rely on it as a food source as well as for income.

So there&#8217;s a little gate to the garden in the wall of Hesco barriers and concertina wire now surrounding the police station.

He added the families, who live right across a narrow alley from the station, have shown great support for the rebuilding effort.

&#8220;This construction is proving a commitment to put police here,&#8221; McCarthy said.

&#8220;Once the community gets comfortable that [the police] will stay, then they&#8217;ll start identifying where the insurgents are hiding.&#8221;