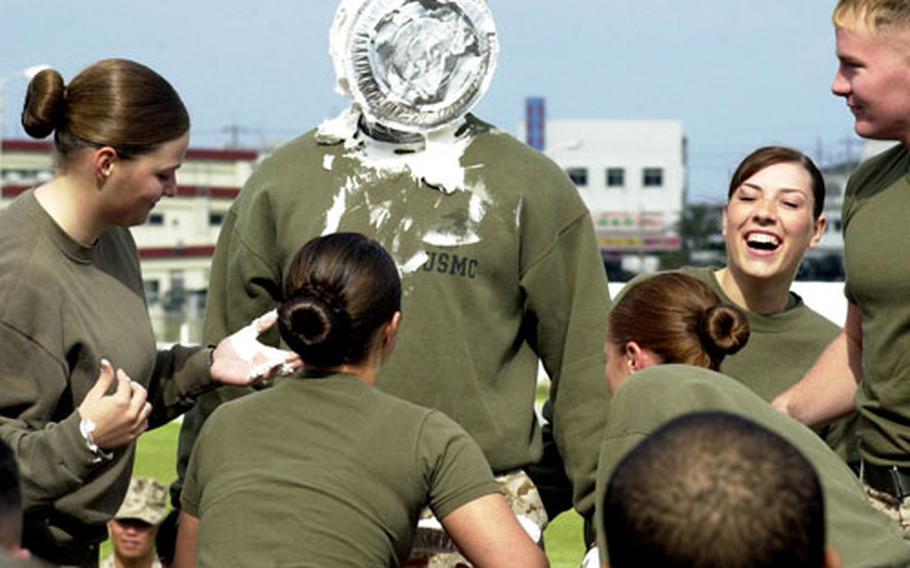 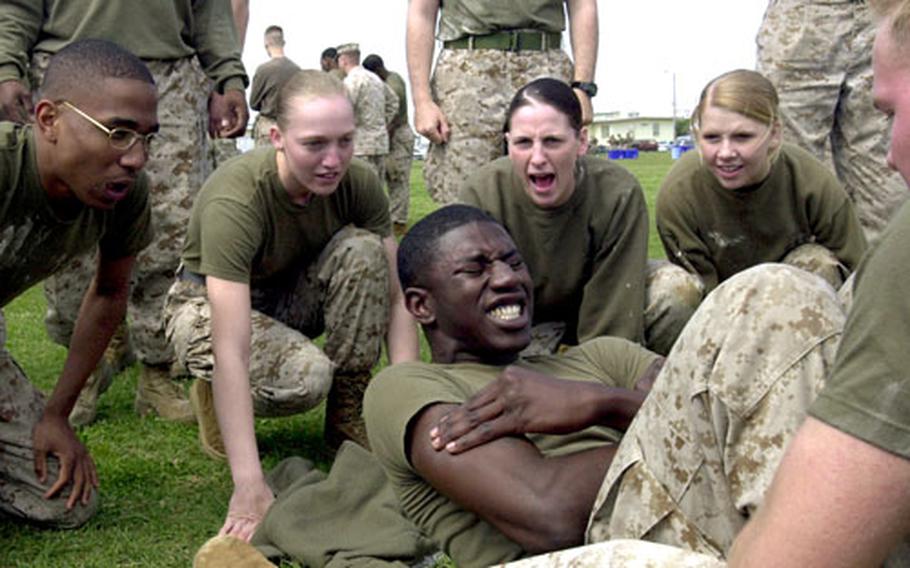 Marines cheer on a teammate during a crunch competition at the field meet. (Fred Zimmerman / S&S) 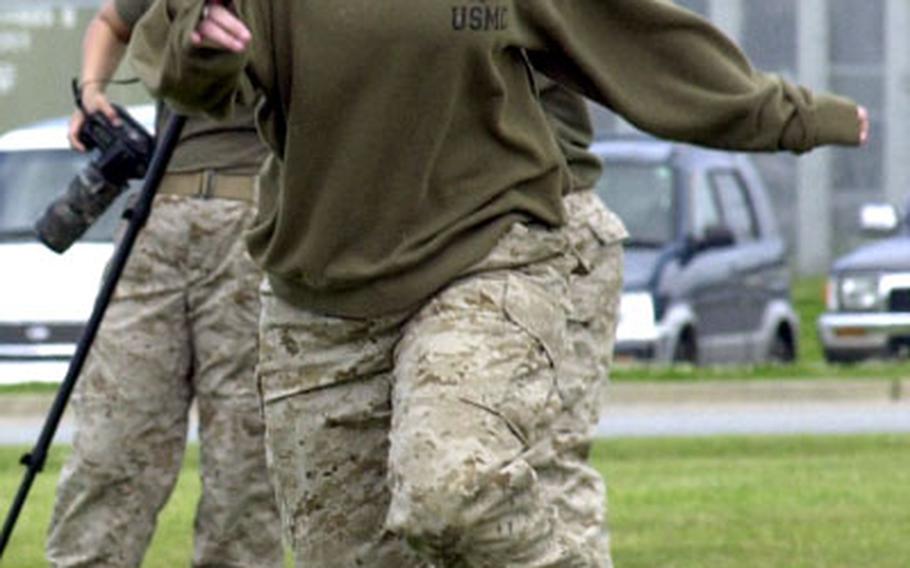 Pfc. Celeste Cummings, from Camp Foster&#39;s Traffic Management Office, is all laughs as she attempts to run a straight line after completing the "dizzy izzy" — quickly spinning around 10 times with your forehead on a baseball bat. (Fred Zimmerman / S&S)

CAMP FOSTER, Okinawa &#8212; Marines from Headquarters and Service Battalion here left the daily grind behind Wednesday and took to the parade field for a little competition in things such as the &#8220;dizzy izzy,&#8221; where you spin around a baseball bat several times and then try to walk a straight line.

Three-legged and wheelbarrow races, the water balloon toss and the tug-of-war, were also on deck.

While the battalion kicked back and had a good time, the day was twofold: to have fun and to raise money for the Navy-Marine Corps Relief Society.

Between events, Marines could donate money and earn a little payback by smashing a whipped cream pie in the face of a fellow Marine or sailor, or soak an officer or staff noncommissioned officer in a dunk tank.

The director of the Okinawa NMCRS, Allison Green, stopped by the event to see how things were going. While there, she unexpectedly raised money when Chief Warrant Office Brian Whorton, the deputy director of the Installation Personnel Administrative Center, offered up a $100 donation if she would take a pie in the face. She agreed, and received a mixed white and chocolate whipped cream facial as the crowd cheered Whorton.

The battalion raised about $3,000 for the relief fund Wednesday, some of which came during a cake raffle where some cheesecakes were netting $200.

This year&#8217;s active-duty fund drive kicked off earlier this month and runs through April 15, according to Green.

The society&#8217;s mission is to provide financial assistance to Marines, sailors and their families in times of need. Last year on Okinawa, NMCRS assistance came in 474 loans and grants, as well as 282 spousal tuition grants. The total amount of disbursements for the Okinawa office in 2005 was $637,085, Green said.

Donations for the current drive are being accepted in the form of allotments, checks or cash. NMCRS officials recommend servicemembers contribute by allotment since the donation can be spread over a 12-month period. Green said those who wish to make donations should contact their command&#8217;s fund-drive representative.

For those who are unable to make monetary donations, Green said NMCRS offices are always looking for volunteers.

Command and activity fund-drive chairpersons should contact Allison Green at 645-7808, or at greenall@okinaw.nmcrs.org.