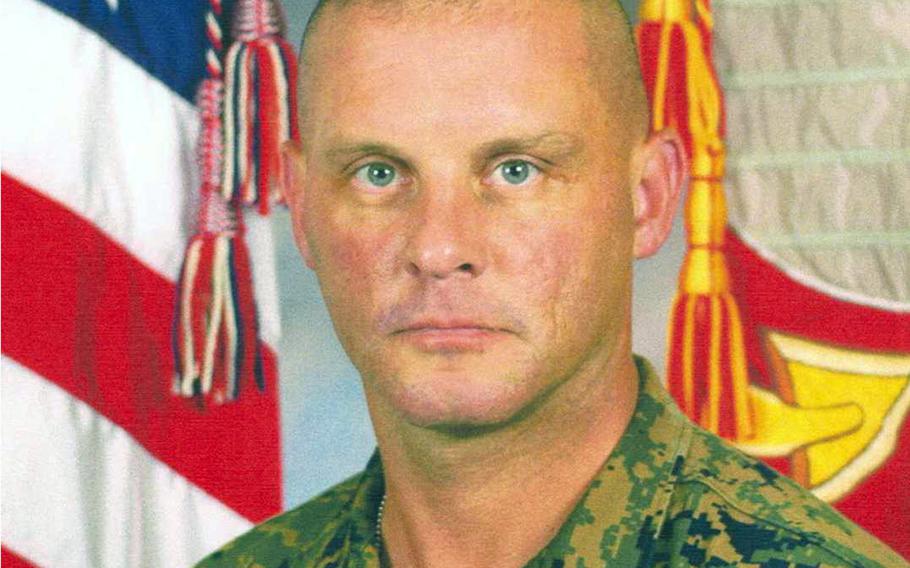 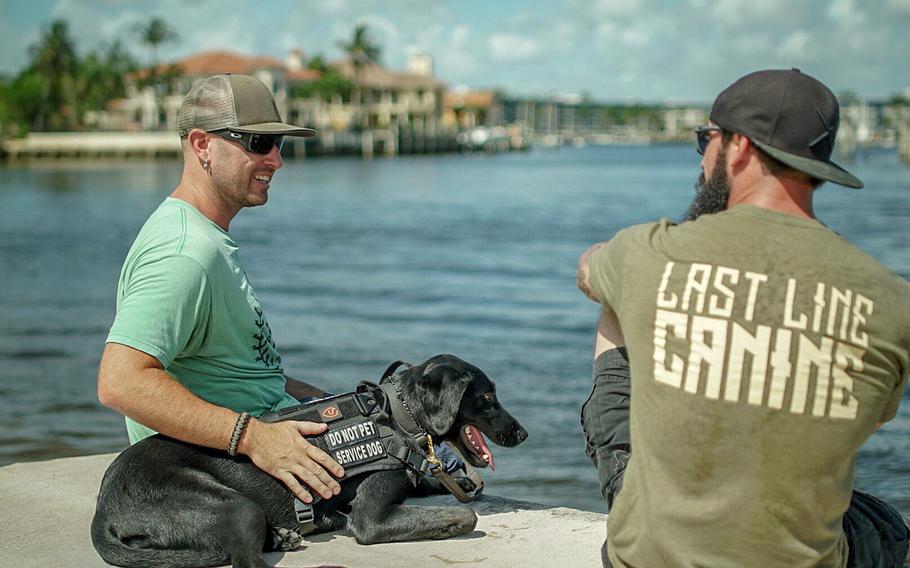 Greg Trost, left, is pictured here in Florida with his service dog Carmie and her trainer in an undated photo. Trost received Carmie through the charity Rebuilding Warriors in August 2018 to help him deal with the symptoms of a traumatic brain injury that resulted from a roadside bomb blast in Iraq in 2004. He and other Marines are raising money to donate a service dog to another Marine in need. (Courtesy of Greg Trost)

Iraq war veterans are raising money to give a service dog to a Marine in need as a way to honor their former battalion commander, who died late last month after a battle with cancer.

During a deployment to Iraq nearly 15 years ago and afterward, retired Col. Mark A. Smith, 54, endeared himself to many Marines in the Reserve battalion with his dedication to the people he led and poignant messages to families back home.

They included Greg Trost, a gunner on the Humvee that took Smith on some 300 combat missions during a 2004-05 deployment to a restive area south of Baghdad.

“I went everywhere he went,” Trost said, including a bomb-littered stretch of Main Supply Route Tampa dubbed the “IED Highway.”

Smith went even when he didn’t have to and when other officers advised against it, Trost said. “We were out constantly,” he said.

Now living in New Hampshire, Trost reconnected with others he’d served with after flying to Indiana, sharing his idea for raising $10,000 for a service dog to be named in Smith’s honor, plus associated expenses. By Monday, he’d already collected half the amount needed through online donations, which are ongoing through the Mayhem Memorial Fundraiser for Rebuilding Warriors Facebook page.

The idea came from Trost’s own “life-changing” experiences after he received a black Labrador retriever in August from the charity Rebuilding Warriors, to help him deal with symptoms of a traumatic brain injury he’d received in Iraq.

“She pulled me out of a dark, bad place,” Trost said of the Lab, named Carmie by the family that donated the funds to train her in honor of a family member.

The former machine gunner, now part owner of a Marine-themed clothing company called Leatherneck for Life, also created a T-shirt as a tribute to Smith and to raise funds for the dog.

The first day, he estimated he’d sold about 100 shirts, with some 2/24 veterans buying more than one each.

Once the funds are raised and a recipient identified, a dog could be selected and trained within 12 to 18 months, said Rebuilding Warriors founder Jeff Anderson, an Army and law enforcement veteran who had helped train Smith, Trost and other Marines in 2004. Anderson also taught Smith martial arts.

“I think the dog will be a great … tribute in his honor,” said Anderson, who said his charity’s mission isn’t about giving away dogs, but about giving veterans their lives back.

Anderson had worked at a kennel and helped train working dogs for police and military units, and started Rebuilding Warriors in 2013 after a Marine reservist asked him to train a service dog for him.

So far, the volunteer-run charity has placed 90 trained canines with veterans in 23 states to assist with post-traumatic stress, brain injuries, amputations and paralysis, he said.

The money raised will pay for the dog and its care, including veterinary bills, while it’s trained in skills such as helping an amputee with balance issues. It also pays for all initial pet supplies and training for the recipient to handle the service dog, Anderson said.

The dog honoring Smith will be named Mayhem, a nod to Smith’s call sign, “Mayhem 6,” and the slogan he used often, including on weekly letters home to the families of his Chicago-based Marine Reserve unit, “Mayhem from the Heartland.”

In recent years, Smith often posted videos of himself singing silly songs on Facebook or Snapchat, said Sharon Semrow, a volunteer who had helped distribute those letters while her husband was deployed with 2/24 in 2004-2005.

During the Iraq war, Smith’s heartfelt letters to Marine families found a wide audience after they were quoted in the media. They were a part of his personal leadership style, said Marines who served with him.

“He made 2/24 into a big family,” said Ivan Lugo, who was a cook with the unit during that deployment and attended Smith’s funeral this month.

Smith built morale and trust by spending time with his Marines and treating them like people, no matter their rank, Lugo said. By comparison, Lugo said he can’t even recall the name of the battalion commander on a later deployment to Iraq.

When Trost was wounded in a roadside blast, Smith was waiting at the base and carried him from a truck to the aid station. He later handed Trost his personal satellite phone and told him to call home.

Official notifications were often frustratingly sparse on details, causing unnecessary strain, he said, and Smith wanted to prevent that.

When two Marines in dress blues showed up at the family home, Trost’s mother knew more than them about his situation, he said.

“That kind of stuff really tells you about his character,” Trost said.