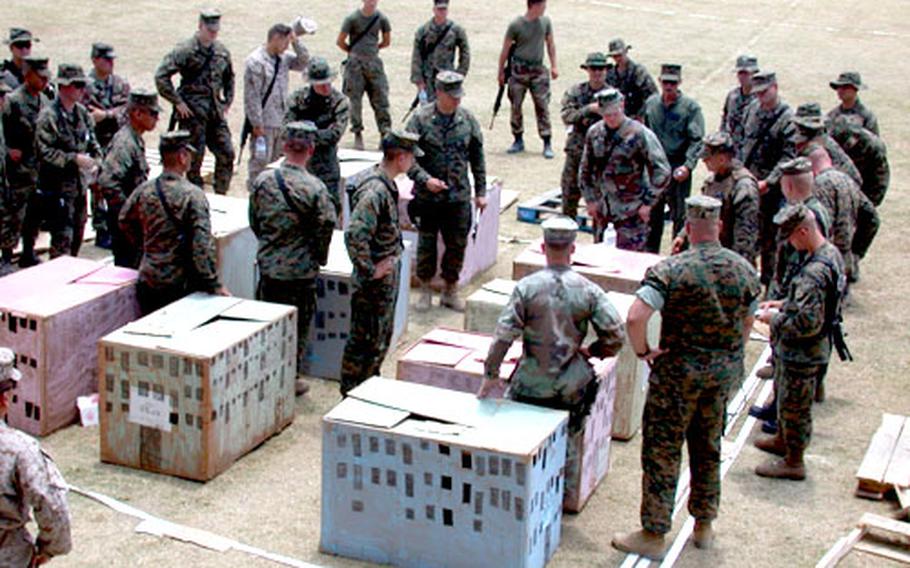 Commanders of the various platoons and companies of the 3rd Battalion, 8th Marines go through a "rock walk" on Tuesday, a dry run through a model of the apartment complex raided Wednesday morning. (Sandra Jontz / S&S)

Commanders of the various platoons and companies of the 3rd Battalion, 8th Marines go through a "rock walk" on Tuesday, a dry run through a model of the apartment complex raided Wednesday morning. (Sandra Jontz / S&S) 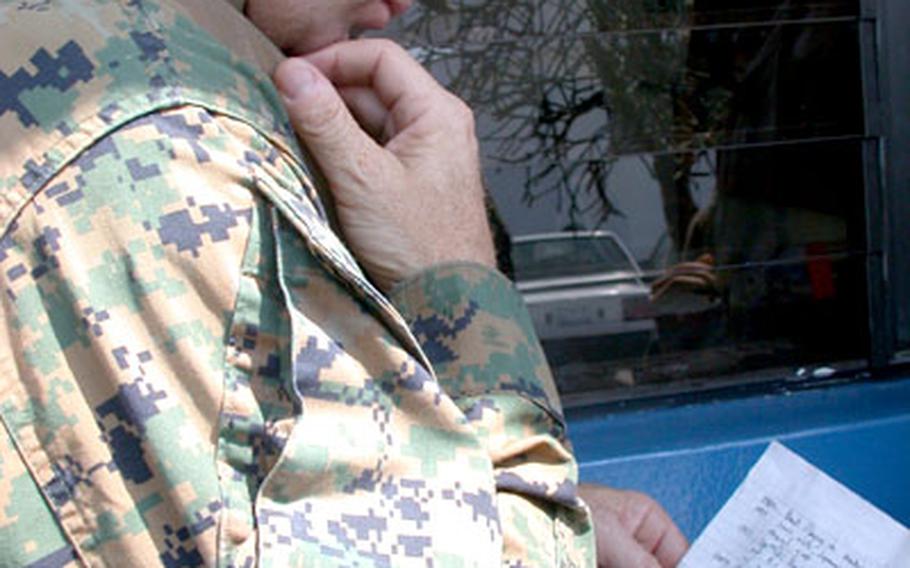 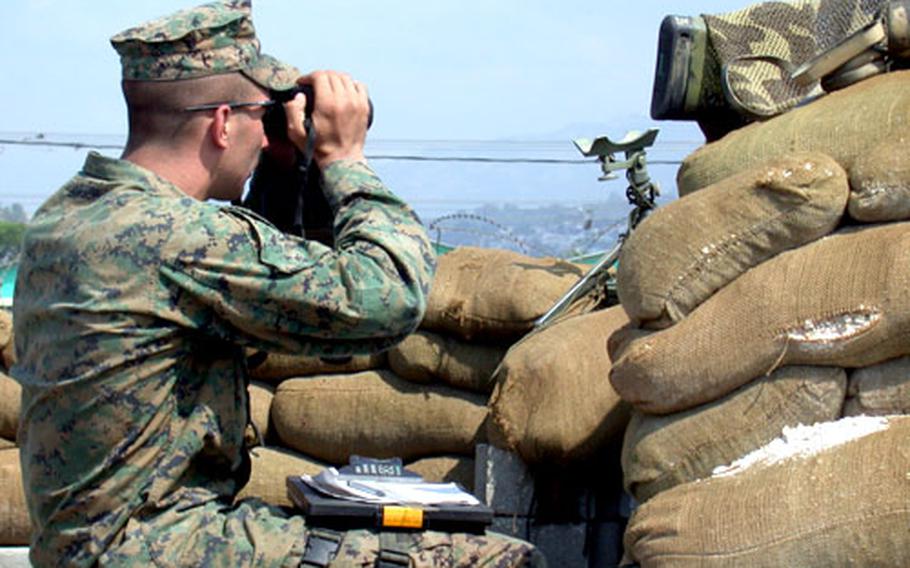 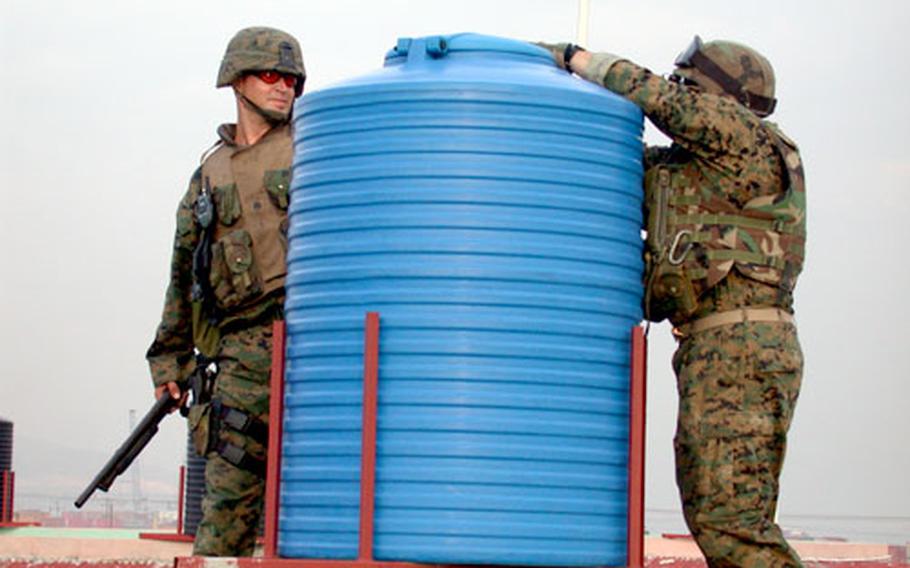 Staff Sgt. T.J. Ford, 31, left, and Staff Sgt. Colin Husband, with EOD, check water tanks atop the 3-story apartment buildings for any weapons or contraband during the raid. Nothing, including water, was found in the eight tanks they checked. (Sandra Jontz / S&S) 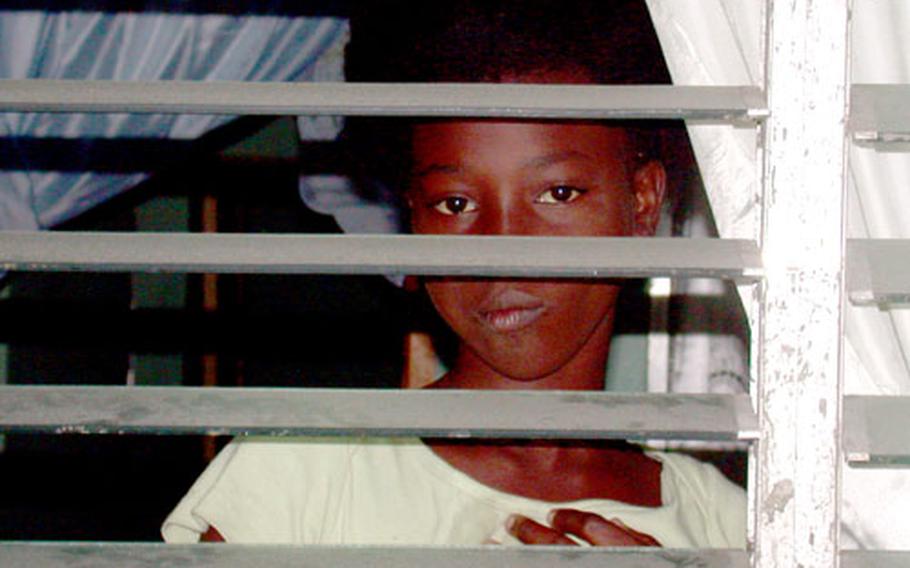 A young Haitian girl peeks through blinds of one of the apartments as roughly 300 U.S. Marines raided the 10-building apartment complex. (Sandra Jontz / S&S)

PORT-AU-PRINCE, Haiti &#8212; In the predawn hours Wednesday, Capt. Sean Connelly ticked off a last-minute checklist with his Marines of Kilo Company just before rolling out for a raid in a hostile area near the city&#8217;s port.

Kilo Company was but one element of Wednesday&#8217;s mission, the largest that Marines of 3rd Battalion, 8th Marines has conducted since arriving in early March, and one for which Marines and their commanders prepped for four days.

It was an area suspected to be home to gang members hostile to patrolling U.S. forces, who have come under fire several times in recent weeks.

The search yielded just one handgun, a bit of a disappointment because the primary reason for raiding the complex had been to seize weapons used in recent attacks on Marine convoys.

They also found stolen vehicles, computers and suspected cocaine and marijuana, some in plain view as they entered the apartments, either by residents opening their doors to Marines, or with a sledge hammer.

Marines detained three Haitian men in the apartment where the suspected drugs were found, and turned over the evidence and the men to Haitian police.

While the operation itself ran smoothly, commanders said afterward, the preparation for it could have gone better. And perhaps some of the missteps tipped off the would-be suspects.

Wednesday morning, one balcony displayed an American flag, which Marines said was suspect because residents either sympathize with the chimere, a gang who fought in support of ousted president Jean Bertrand-Aristide, or are subject to the gang&#8217;s intimidation tactics.

Some residents interviewed said they welcomed U.S. forces. &#8220;I think it&#8217;s a good thing for them to take weapons off the bandits,&#8221; 23-year-old Billy Dorseus said through a translator.

When asked if they trusted the local police, the eight people gathered at the entrance of one building replied &#8220;no&#8221; in unison.

Under Aristide, the police had a reputation of being corrupt, which many feel is still true, despite his expulsion, Berger said. Having them work and practice with Marines is an effort to restore their credibility.

And for Connelly, as with the rest of the battalion, main mission accomplished.