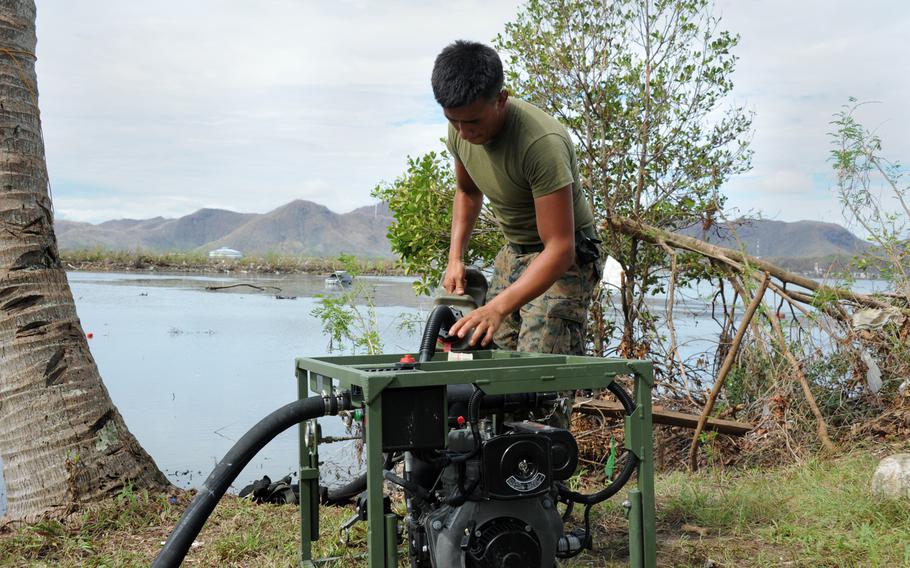 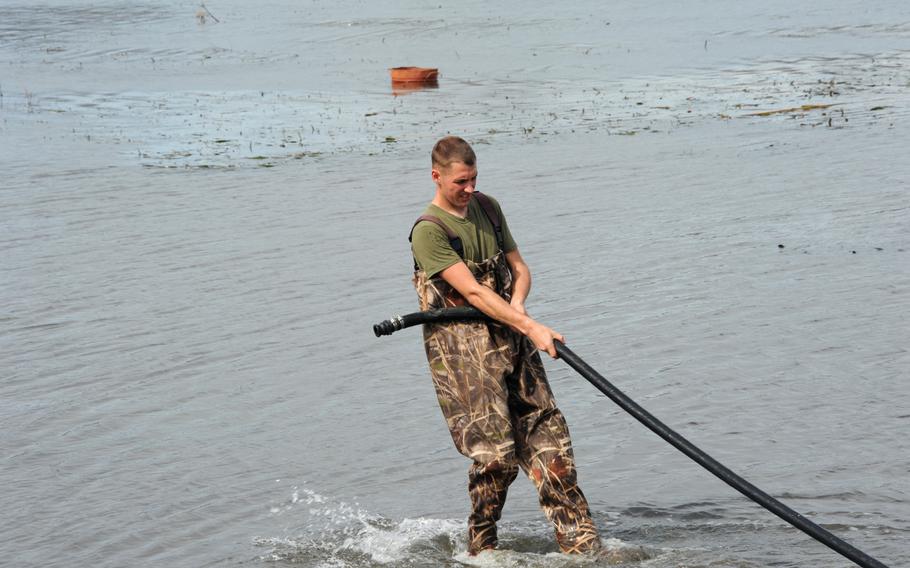 Marine Lance Cpl. Richard Frederick from the 9th Engineer Support Battalion moves a raw water purification pump hose to allow for easier flow of water to the purifier. Marines have purified more than 100,000 gallons of water for use by Typhoon Haiyan victims. (Peter D. Blair/U.S. Navy)

BALO, Philippines — A middle-aged woman walked through the rain in mismatched flip-flops toward a small cluster of people on the roadside. She pointed to a camouflage-painted water tank and asked if the contents were drinkable.

“Please give me water,” pleaded Aurora Noveda, who said she had walked about a mile from her home — roofless since Typhoon Haiyan blasted ashore two weeks ago — after hearing from neighbors that someone nearby was giving away water.

Noveda left a few minutes later with a 2.5-gallon plastic container of water, siphoned from the sea and purified by the 3rd Marine Expeditionary Brigade.

Fewer than a dozen Marines run the 24-hour water production site about 10 kilometers from downtown Tacloban in MacArthur Park, named for the former U.S. general. A smaller Marine facility operates near the Tacloban airport.

“It’s a good feeling to be able to provide this kind of service to the people, especially when you see the kids walking down the streets with water jugs,” said Staff Sgt. Steve Chapman, who runs the MacArthur Park site, which opened about a week ago.

The team’s eight “water dogs,” or water support technicians, siphon 15-20 gallons of water per minute directly from the ocean, using hoses draped over a retaining wall. It goes through a series of storage tanks and filters, including a “cyclone separator” that filters out sand, and is stored in two 20,000-gallon tanks and 3,000-gallon tanks that lie on the ground like giant beige lozenges.

The group, which includes electrical and communications workers, sleeps in tents, with a million-dollar ocean view in front of them and the aftermath of the one of the world’s most devastating storms behind.

Across the street are fields of flattened or broken palm trees and a few sturdy homes that weathered Haiyan. A few Filipino troops, part of a contingent enforcing a curfew, sleep nearby in makeshift tents.

Sgt. Carlos Trujillo, who was deployed to Haiti following the 2010 earthquake, said “you can’t even compare” the two disasters.

“When we went to Haiti, buildings were flattened, roads were kind of down. I thought that was pretty bad, but after going through the city (of Tacloban), I believe it is 10 times worse here than in Haiti,” he said.

Lance Cpl. Emmanuel Dagsa, who was born and raised in Manila, said local residents speak to him in Tagalog, telling him stories about how the cyclone destroyed everything and that they’re not sure if the water at their homes is drinkable.

“It’s pretty awesome,” he said of working in the Philippines — a place he didn’t expect to go as a Marine.

Lance Cpl. Jaicinio Jarrettsoto sat atop a 400-gallon “water bull” and directed a light but steady stream of Filipinos to fill their empty USAID-provided water jugs by using the taps on the side of the tank. He described the mission as “no sleep, always wet, all the mud - but it’s for a good cause.”

On Thursday, the MacArthur Park site distributed 15,000 gallons of water, its highest one-day total so far.

A handful of people said they heard about the site through word of mouth. All were picking up water there for the first time.

Mauro Gawala said his family of seven had only three gallons of drinkable water left, and he wanted to build up their reserve for the next few days.