Buy Photo
In southern Nawa district, joint patrols between Marines and Afghan security forces are becoming the norm. Both Afghan police and army are stationed with U.S. troops at 25 small patrol bases scattered around the central Helmand province town. Pushing Afghan forces down to the platoon and squad level is seen as a way to speed up their readiness. (Photos by John Vandiver/Stars and Stripes)

Buy Photo
In southern Nawa district, joint patrols between Marines and Afghan security forces are becoming the norm. Both Afghan police and army are stationed with U.S. troops at 25 small patrol bases scattered around the central Helmand province town. Pushing Afghan forces down to the platoon and squad level is seen as a way to speed up their readiness. (Photos by John Vandiver/Stars and Stripes) 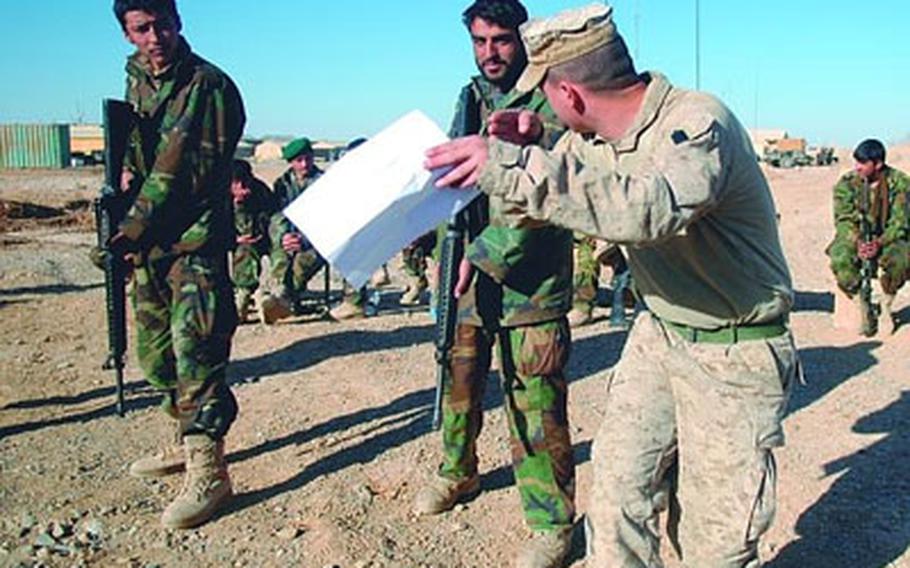 Marine Cpl. Joel Danielson demonstrates shooting techniques to Afghan National Army soldiers who are being trained as part of a new program at Forward Operating Base Geronimo in Nawa. The platoon of soldiers is stationed at a nearby combat outpost, but this platoon has struggled to absorb the lessons from Marines, who say a lack of motivation has been an issue. () 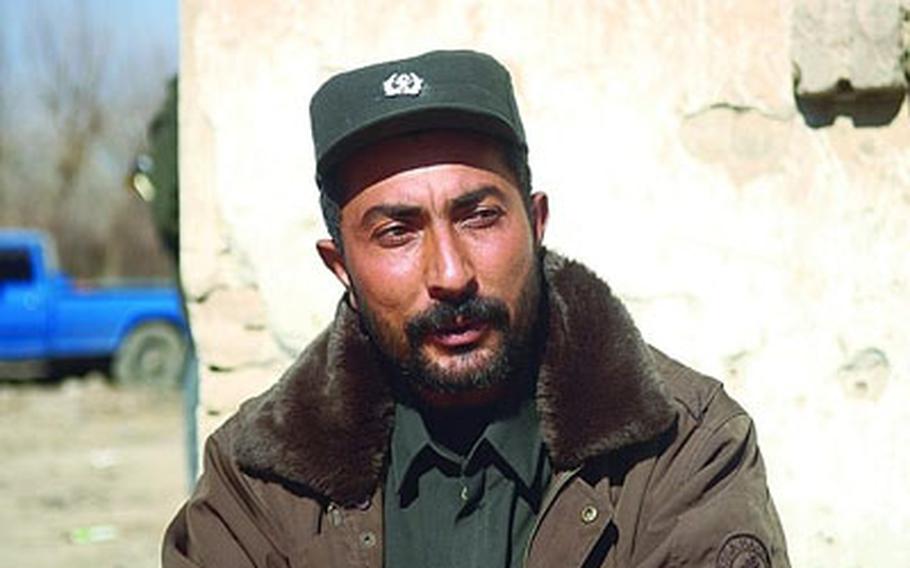 Hamid Shaw, the police chief in a Nawa village of 6,500, says he needs the platoon of Marines he works with to stay for two more years before his police officers can secure the population on their own ()

NAWA, Afghanistan &#8212; Marine 1st Sgt. Fredrick Smith was eyeballing the strange-looking convoy of vehicles that had come to a halt near a remote patrol base in the desert wasteland of central Helmand province.

In the distance, the unmarked cars and trucks of men toting AK-47s were clearly out of place. Even more troubling: The passengers were changing from civilian clothes to Afghan National Police uniforms. Could they be Taliban in disguise, on mission to plant roadside bombs or deliver supplies to fighters in other parts of this violent province at the heart of the fight in Afghanistan?

Smith and the other men of the 1st Battalion, 3rd Marines Regiment peered through the scopes of their rifles for a closer look. A message suddenly came in over the radio that delivered map coordinates for suspected Taliban traveling through the area.

"That&#8217;s right where we&#8217;re looking," says Smith, who was leading a convoy of Marines on a resupply mission to a tiny outpost called Patrol Base Brannon.

Meanwhile, members of the Afghan National Army living in the Nawa district alongside Marines kicked a soccer ball around, seemingly oblivious to potential Taliban in their midst. A trusted ANA member later reassured the Americans that the suspicious-looking men were Afghan soldiers. It had all been a harrowing false alarm.

As troops surge into Afghanistan by the day as part of President Barack Obama&#8217;s plan to reverse the gains of the Taliban, Marines are pushing out into smaller and smaller patrol bases, looking to work more closely with the ANA, Afghan National Police and the civilians they seek to protect.

In many cases, Afghan security forces are joining the Marines on these primitive patrol posts, where troops live in unheated tents, take cold showers in the frigid air and patrol by foot around the clock, always on the alert for lurking Taliban.

The clock is ticking, with Obama setting a target date of 2011 to begin withdrawing U.S. forces, and the Marines are prodding their Afghan counterparts to take on more responsibility. It is a work in progress, mixed with gains and setbacks and uncertainty.

"Rome wasn&#8217;t built in a day, and neither will Nawa district of Helmand," said Lt. Col James Baker, who commands about 1,000 Hawaii-based Marines operating in central Helmand. "It takes awhile to grow leadership up."

To groom police, the Marine Expeditionary Brigade&#8211;Afghanistan, the headquarters for Marine operations in Helmand province, has opened a police training academy. In December, the facility graduated its first class of recruits, some of whom are working alongside Marines at a small outpost in southern Nawa district.

The 1st Battalion, 3rd Marines Regiment have been working in the Nawa district since December and are putting platoons and even smaller elements on far-flung patrol bases with Afghan troops. As more Marines continue to arrive, more patrol bases are expected to sprout in Helmand. The hope is that such close partnerships at lower levels will speed up the transition process for the Afghan troops.

"The partnered units at the platoon and squad level, they&#8217;re all doing fine," said Baker, whose Marines operate 25 patrol bases with Afghan security forces. "The more disciplined and more hard-core the American bases are run, the more responsive the ANA are, and their junior leaders step up. It&#8217;s a function of one shared hardship. They&#8217;re living pretty rough."

Smith, the first sergeant for the battalion&#8217;s Company C, said his Marines are developing trust in the Afghans they live with, but a backup strategy is in place just in case, he said.

"Yeah, we live with them. But the instant, the second something goes wrong you&#8217;ve got to have a plan," Smith said. "We have a plan to kill everything."

Commanders living and working closely with the Afghans say bonds are being formed.

"The police here, they defy the reputation they have around the country," said 2nd Lt. Brandon Salter, a platoon commander at Noba Patrol Base in southern Nawa, where 40 Marines and 20 Afghan police live together in neighboring tents.

The Marines and Afghans routinely conduct joint patrols, share meals and hang around during rare down time. There is little hand-holding at the patrol base, where the ANP guard a checkpoint outside the post and conduct patrols without prompting from the Marines, Salter said.

Since the ANP in Salter&#8217;s area get most of the tips about weapons caches and Taliban in the area, the Marines are able to focus on working with the local population on civil affairs projects such as bridges, canal cleanups and health clinic renovations. The village appears to be a pocket of relative security in otherwise very dangerous territory, Salter said.

"Someone is doing something right around here. I would have to give all the credit to the ANP," said squad leader Sgt. Jeffrey Mayor, a veteran of multiple deployments in Iraq and Afghanistan, as he gave a rare accolade to the much-maligned police force.

At Forward Operating Base Geronimo, home to 1-3&#8217;s headquarters in Nawa, Marines have just begun a training program to sharpen the Afghan&#8217;s soldiering skills. Gunnery Sgt. Steven Taylor, who oversees the training, recently worked with a subpar platoon of ANA that struggled with simply showing up for work and cleaning its weapons. More troubling was the fact the platoon showed little interest in improving, he said.

"They have a long way to go," Taylor said. "We have no choice but to keep trudging along because failure isn&#8217;t an option.

"They&#8217;ll never be like us. But the hope is," Taylor added, holding his thumb and forefinger an inch apart, "to get them to the point where they are this much better than the Taliban."