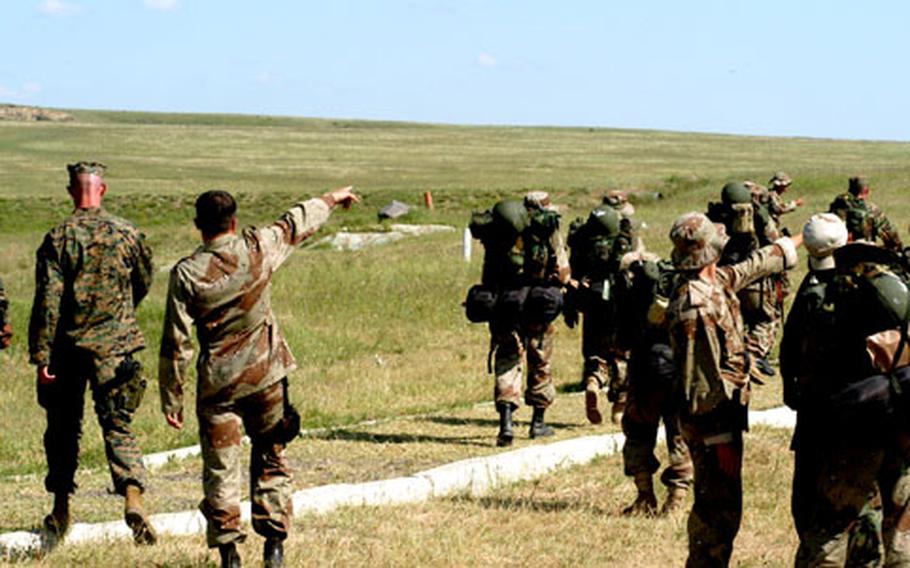 Members of a Georgian scout team take directions from their training leader as they advance into the countryside. U.S. Marines continued to train with Georgian soldiers last week outside Tbilisi, Georgia. (Russ Rizzo / S&S)

Members of a Georgian scout team take directions from their training leader as they advance into the countryside. U.S. Marines continued to train with Georgian soldiers last week outside Tbilisi, Georgia. (Russ Rizzo / S&S) 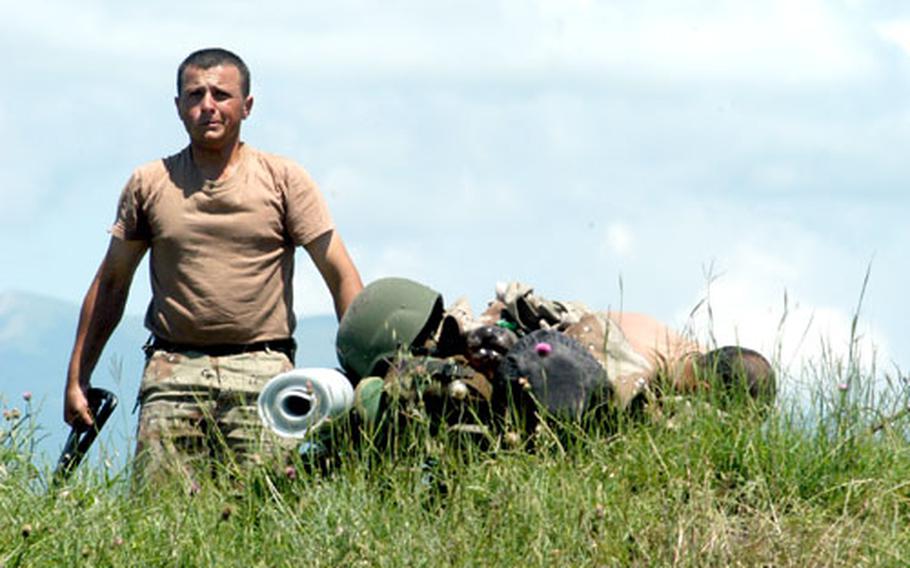 A Georgian soldier peeks over a bluff. (Russ Rizzo / S&S) KRTSANISI NATIONAL TRAINING CENTER, Georgia &#8212; The car ride from the Tbilisi International Airport to Georgia&#8217;s main army training base offers a glimpse of the challenges facing this former Soviet republic.

The pavement is littered with potholes and stray dogs run around, creating a dizzying traffic pattern of swerving cars. Rusted aluminum houses droop toward the ground, attesting to the poverty the country faces 14 years after the end of Soviet rule. The stench of gas fumes fills the air.

Just before the end of the bumpy 20-minute journey, though, a reminder that things are slowly changing presents itself.

&#8220;That&#8217;s one of the Land Rovers we just gave them,&#8221; a U.S. Marine says as a green sport utility vehicle carrying Georgian soldiers passes outside the front gate of the Krtsanisi Military Training Base.

Inside the base are more signs of progress. A new barracks building stands next to a dirt soccer field. Georgian soldiers line up wearing newly purchased uniforms with recently acquired Russian-style rifles. Their pay and the quality of their training has increased substantially from just a few years ago, and with that their pride and their confidence, U.S. and Georgian military members say.

This transformation is in large part a result of a three-year effort by the U.S. military to train and equip the Georgian army. What started as an effort to ensure stability in a country vital for U.S. interests became a partnership that exchanges training and construction for soldiers on the ground in Iraq. The current initiative, a 14-month, $63 million venture that began a few months ago and called the Georgia Sustainment and Stability Program headed by Marine Forces Europe, aims to train a second battalion of Georgian troops to replace the one in Iraq now.

Many Georgian soldiers see a strong military as a key to their country&#8217;s success. They cite separatist movements within Georgia&#8217;s borders, terrorists in and around the Caucuses, and their Russian neighbors to the north as potential dangers. And while they do not mention it, an oil pipeline running through their country that opened earlier this year will play a vital role in resurrecting an economy mostly reliant on agriculture. Protecting that pipeline will prove critical.

&#8220;A strong army is good for us, and important for us,&#8221; says 25-year-old Lt. Zaza Arveladze in English laced with a slow Georgian accent, on a break from training with some of the 31 Marines heading the training effort.

&#8220;We end our partnership and are alone with our crazy neighbors, the Russians,&#8221; Arveladze says.

Cpl. Tripon Kutateladze stands next to Arveladze wearing a stoic face. A month ago, his uncle lost an eye and an arm in a car bomb attack while serving in Iraq with the Georgian army. To Kutateladze, the attack offered added enticement to go to Iraq.

Around the training area, most of the faces are young. And with youth comes inexperience.

When Pierson taught his company in land navigation, he learned that many of the Georgian soldiers could not read a map or compass. When the company practices advancing on another company of Georgian soldiers, they yell &#8220;baku-baku&#8221; &#8212; a version of &#8220;bang-bang&#8221; &#8212; to imitate gunfire because they have no blank rounds or paintball guns.

But despite their lack of equipment and training, even the most inexperienced of soldiers shows little reserve about fighting in Iraq.

Cpl. Elkatherine Kekelidze, a 23-year-old rifleman who recently joined the army, says her work with a peacekeeping mission in Tskhinvali, Georgia, prepared her for Iraq. She is one of about 20 women in her battalion.

&#8220;I have a little experience, so I know what to expect,&#8221; she says, her chipped purple nail polish showing on her sandaled toes.

Many of the soldiers seem to see their country as rising from a long fog and are willing to take any opportunity to show off its progress.

A medical tent to cure all ills at exercise

Navy Commander Eric Kuncir offers quite the understatement when he tells visitors that the medical tent he oversees at Georgia&#8217;s main training base is &#8220;a little more robust than normal.&#8221;

In fact, a team of 15 Navy medics set up a two-room tent with $2.5 million in hospital equipment, including a full operating room, digital X-ray machine, ultra-sound and blood bank with 10 units of blood and a database of every Marine&#8217;s blood type.

Getting too warm in the tent? No problem. Kuncir flicks a switch and the air conditioner roars to life.

Kuncir said his team wanted to be prepared to operate in case anyone got hurt during live-fire training conducted by troops from Marine Forces Europe at a nearby firing range.

The doctors have performed one surgery so far. A Georgia soldier complaining of abdominal pain turned out to have appendicitis, so the doctors removed his appendix and kept him overnight, Kuncir said.

In a bit of irony, the head medic for the Georgian soldiers training at the base contracted pneumonia and also spent the night in the tent before being released, Kuncir said.

The worst part of his stay was finding out that he needed to go to a local hospital, said Lt. Rafal Banek, an intensive care nurse.

The doctors did get practice treating a battlefield injury on Tuesday. But the damage was inflicted by a scorpion rather than friendly fire. Cpl Murman Makharadze was treated in a field medical tent near the firing range before arriving at the Navy&#8217;s medical tent on base.