Marines pitch in to show Iraqis the light 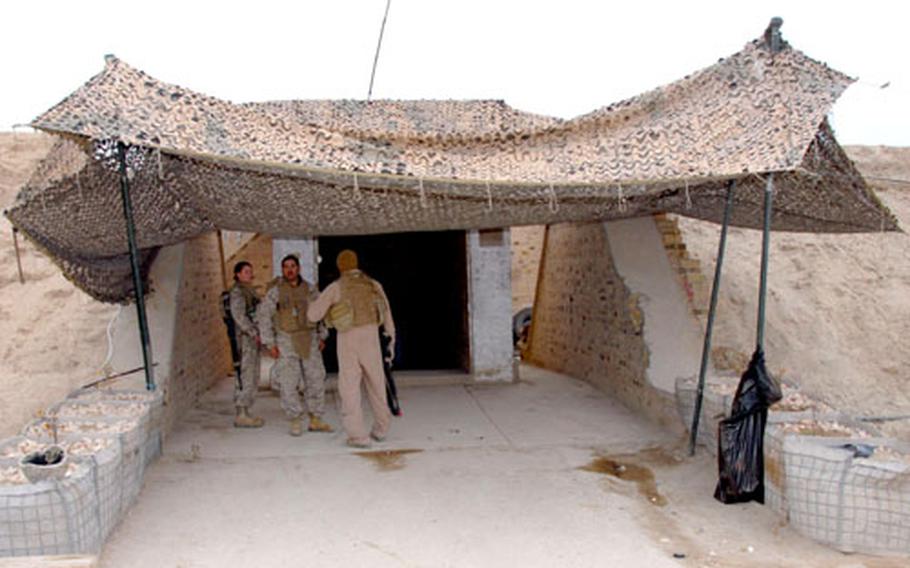 The entrance to one of the bunkers renovated by the Okinawa-based 9th Engineer Support Battalion Marines for Iraqi army soldiers. A company of soldiers lives in each bunker, which originally were dark and often cold. (Megan McCloskey / S&S)

The entrance to one of the bunkers renovated by the Okinawa-based 9th Engineer Support Battalion Marines for Iraqi army soldiers. A company of soldiers lives in each bunker, which originally were dark and often cold. (Megan McCloskey / S&S) 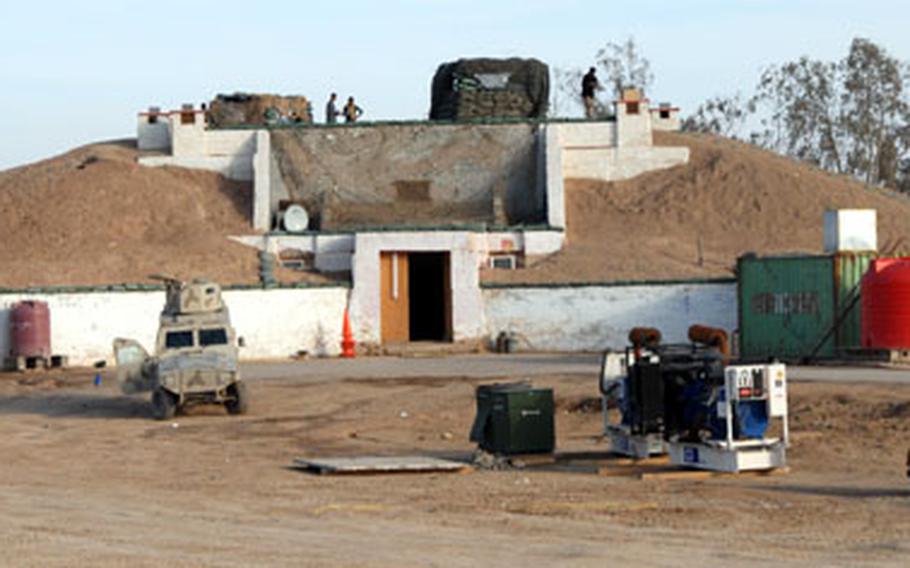 Cpl. Matthew Kimball, 23, holds up a portable light in one of the rooms where Iraqi army soldiers sleep in the bunker. (Megan McCloskey / S&S) Sgt. Garival Perez, third from right, and Cpl. Victoria Wellman relax with Iraqi army soldiers during a renovation project of the Army’s living quarters. The soldiers are eager to have their photos taken with the Marines and ask to do so often. (Megan McCloskey / S&S)

The bunkers at a nearby Iraqi army base are dark, dank and, frankly, uninhabitable &#8212; at least for any long period of time. But live in them the soldiers do, crowded into the concrete rooms, one company per bunker, with no temperature controls and very little light.

The Marines are doing renovation projects to make the base more livable and foster retention. They recently fixed up the six bunkers, rewiring the power, adding lights and installing heat and air conditioning units.

Some of those who join the Iraqi army can&#8217;t go home again because of safety concerns, stranding them on base and making the living conditions especially important, Ruiz said.

One Iraqi army staff sergeant said the renovations are boosting the soldiers&#8217; morale.

The Iraqi army base is sparse, really just a designated stretch of sand with the occasional bump of a bunker disrupting the flat land. In the bunkers, the only natural light comes from tiny box windows at the top of tall stone walls, creating an atmosphere of an old-time prison. The Marines even had to chisel out iron bars on the windows to install the air-conditioning and heater units.

The bunker is divided into large rooms accessed through double metal doors. It&#8217;s reminiscent of the fallout shelters of the 1950s with bunk beds, a desk in the corner and a stove set up in the hallway.

The Marines found out firsthand what it was like to live in the bunkers. They stayed there on cots that lined the walls as they renovated the place.

It took a dozen Marines two to three, 14-hour days to complete a bunker, initially working by flashlight until the wiring was done and new lights were installed.

&#8220;There was one single light that barely lit up the room at all,&#8221; Wellman said, adding the wires were exposed and dangerous.

The Iraqi soldiers cook their meals in a makeshift kitchen off the side of the rooms.

Sgt. Garival Perez, 31, said the cook relied on the flame from the stove to see until two lights were installed in the hallway.

That type of gratitude from the Iraqi soldiers continually amazed the Marines.

Perez said this is the kind of work that sticks with you.

Next up, they&#8217;ll install shower trailers to replace the makeshift stalls where the soldiers bring in water in pails to bathe. Kitchen trailers also are planned.

An Iraqi caretaker is assigned to each bunker and trained in the upkeep, so they can maintain the improvements themselves.

One Iraqi army first lieutenant said he couldn&#8217;t put into words his appreciation for the renovations.

Cpl. Victoria Wellman was the first female to ever step foot on the Iraqi army base and she caused quite a stir.

The soldiers were quite taken with the young woman, constantly asking to take her photo.

One day, she stepped outside the bunker to grab a light bulb and didn&#8217;t make it back for 45 minutes because of all the soldiers who wanted to snap her photo.

One soldier took a close up shot of her face and ran away kissing her image, she said, a little embarrassed.

The Iraqi soldiers seem just as pleased to have their photos taken with any of the Marines working on the base. They gather together, throw their arms around shoulders and tell everyone to give the thumbs up sign.