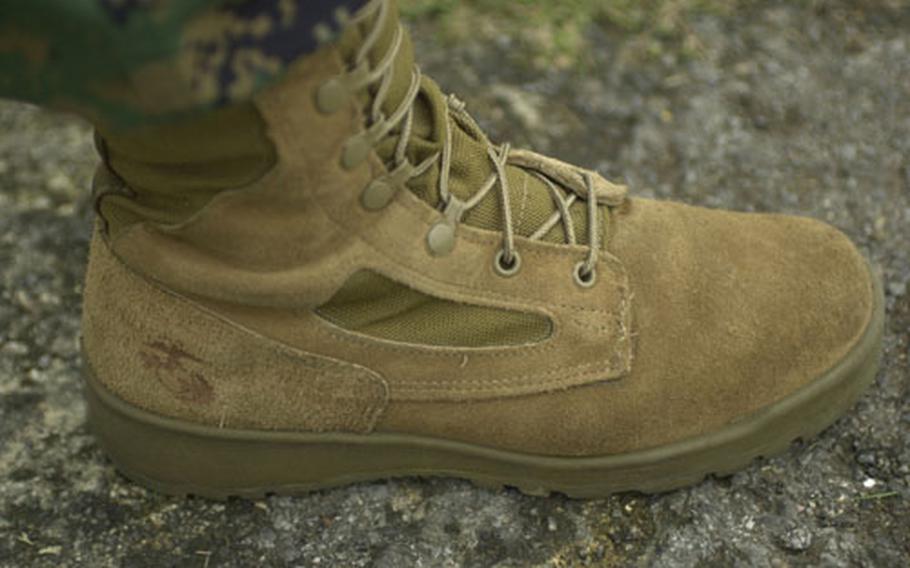 Some Marines unknowingly have purchased knock-offs of the new Marine Corps combat boots, which are hard to come by in some sizes. The fakes often have the eagle, globe and anchor stamped on the outer heel, just like this authorized boot, so the best way to tell is by looking at the manufacturer’s label inside. (Fred Zimmerman / S&S)

Some Marines unknowingly have purchased knock-offs of the new Marine Corps combat boots, which are hard to come by in some sizes. The fakes often have the eagle, globe and anchor stamped on the outer heel, just like this authorized boot, so the best way to tell is by looking at the manufacturer’s label inside. (Fred Zimmerman / S&S) 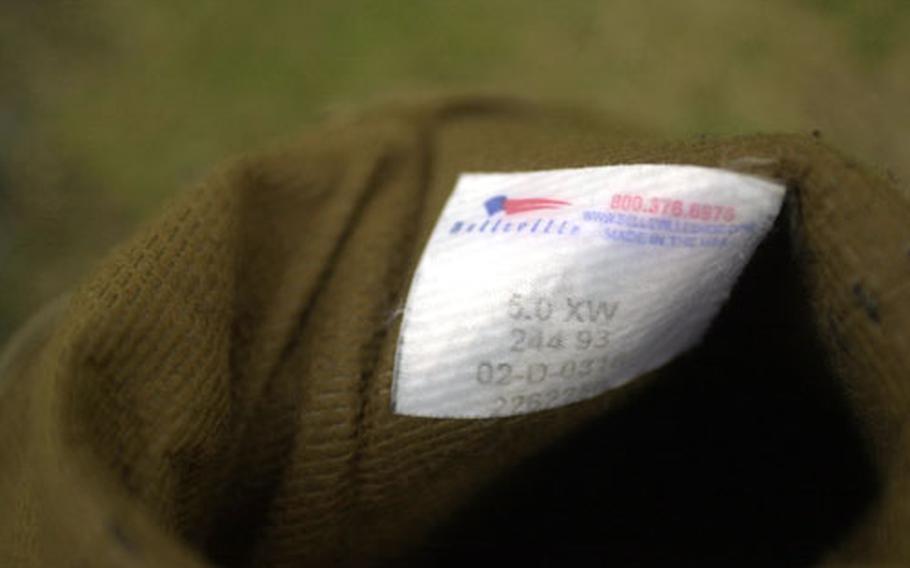 One way to make sure the new Marine Corps combat boot is authorized is to check for a manufacturer’s tag on the inside with a certification number. Currently, only Belleville Shoe and Bates-Wolverine are authorized to make the new boot, but the Corps plans to authorize more companies in order to keep up supplies. (Fred Zimmerman / S&S)

CAMP FOSTER, Okinawa &#8212; The trusty old &#8220;black Cadillacs&#8221; that get Marines where they&#8217;re going are taking a hike soon, and the Marine Corps is trying to make sure replacements are plentiful.

The Corps slowly has been phasing in new suede combat boots. The cutoff date for Marines to own one pair of both the temperate and hot-weather versions is Oct. 1, according to Kristy Chaplin, project officer at Marine Corps Systems Command.

Once the mandatory date to own the new boots rolls around, Marines no longer will be able to wear the &#8220;black Cadillac&#8221; combat boots or jungle boots, Chaplin said.

But the new boots are hard to come by in some sizes, Chaplin said, so the Corps is authorizing more companies to manufacture them.

&#8220;The commandant approved the use of optional soles for boots,&#8221; Chaplin said. &#8220;This allows for welt or stitch-down construction in addition to the current approved injection-molding process. By allowing these alternative sole constructions it opens up the supply base of boot manufacturers that can meet the specifications without compromising the performance of the boot.&#8221;

Chaplin said this will give Marines more options on which boots to purchase. Until the optional soles were approved, there were only two companies approved &#8212; Belleville Shoe for the temperate boot, and both Belleville and Bates-Wolverine for the hot-weather version. Chaplin said the temperate boot costs $96.35, while the hot-weather version runs $75.45, but prices will vary once exchanges negotiate their own contracts with new manufacturers.

Systems Command must authorize any boots before they go on sale, Chaplin said. The makers must submit their boot to the command, who then tests the boot to make sure it&#8217;s up to specifications. If up to par, the company is certified and given a Marine Corps certification number that must be listed on a label inside the boot. Chaplin said all footwear must be recertified every three years.

Copycats already are beginning to appear. Recently, it was discovered that a vendor at the Marketplace Mall in the Camp Foster Exchange area was selling knock-offs of the Corps&#8217; new boots.

&#8220;When the sale of these boots, made by an unapproved source, was brought to our attention, the contractor was immediately directed to remove them from sale and has done so,&#8221; said Robert Little, the exchange&#8217;s general manager. He added that authorized boots are sold only at Clothing Sales.

&#8220;It is unfortunate for those Marines that feel they are buying an approved boot,&#8221; she said. &#8220;The only way we can combat this issue is to educate the Marine population on what is approved and how to tell.&#8221;

Other than looking for the Corps&#8217; eagle, globe and anchor on the outer heel of the boots, Chaplin said, Marines can spot the authorized version by looking for the Belleville or Bates label. Once the new optional-sole boots hit the street, Chaplin said to look for a Marine Corps certification number or the words &#8220;USMC approved&#8221; on the label.