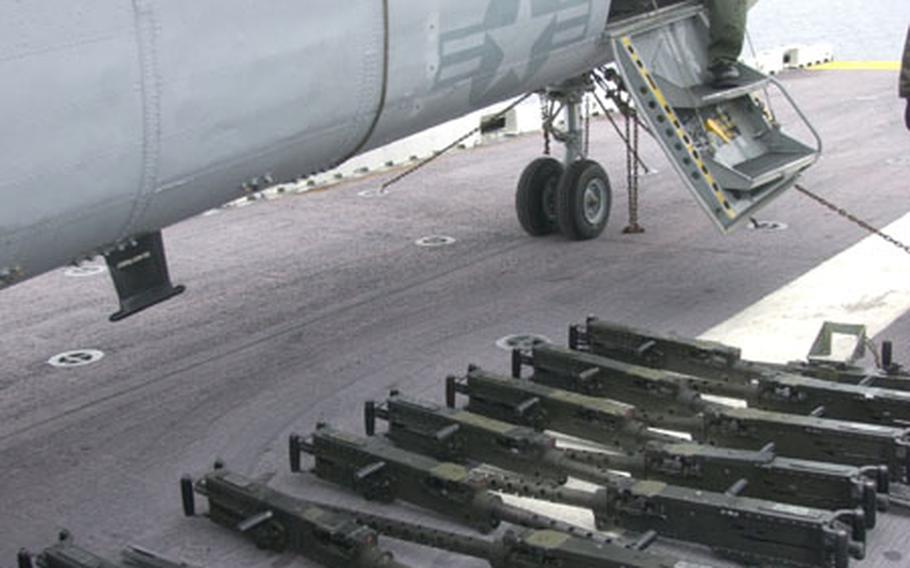 Marine Master Gunnery Sgt. Jeffrey Harter stands on the steps of a helicopter above rows of .50-caliber machine guns aboard the amphibious assault ship USS Bataan on Wednesday. The ship is traveling through the Mediterranean Sea on its way to the Persian Gulf to help support the rotation of about 25,000 Marines into Iraq. (Scott Schonauer / S&S)

Marine Master Gunnery Sgt. Jeffrey Harter stands on the steps of a helicopter above rows of .50-caliber machine guns aboard the amphibious assault ship USS Bataan on Wednesday. The ship is traveling through the Mediterranean Sea on its way to the Persian Gulf to help support the rotation of about 25,000 Marines into Iraq. (Scott Schonauer / S&S) 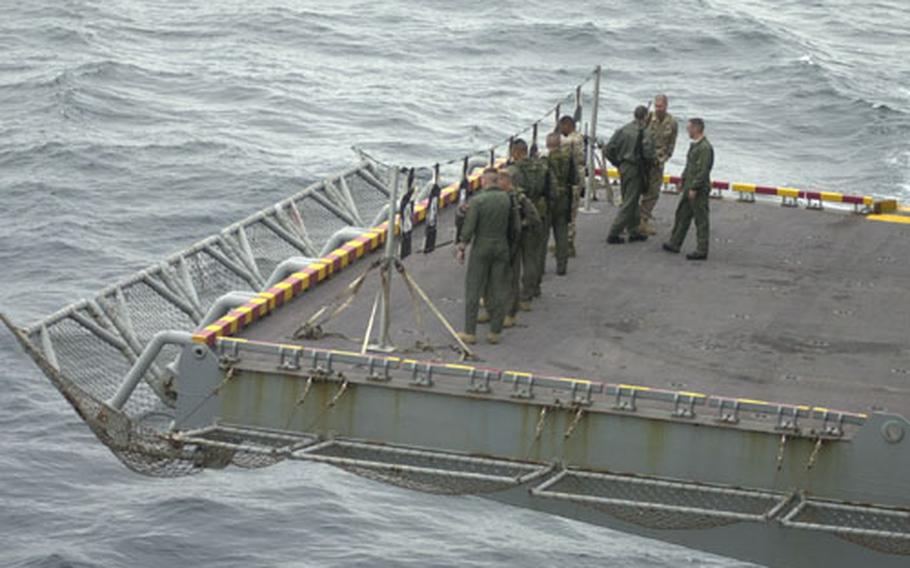 Marines check to see if they shot their targets during M-16 rifle training Wednesday aboard the amphibious assault ship USS Bataan in the Meditarranean Sea. (Scott Schonauer / S&S) 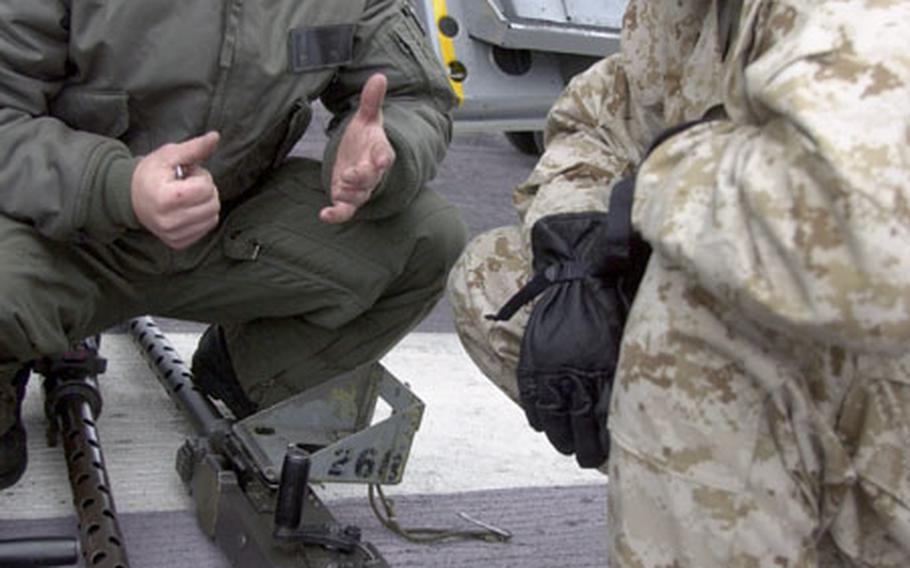 ABOARD THE USS BATAAN &#8212; The Marines were hundreds of miles from Iraq but the earsplitting cracks and the pungent smell of sulfur overwhelmed the ship.

Helicopter crews on their way to the Persian Gulf used the Mediterranean Sea&#8217;s vast open waters on Wednesday to practice firing guns, big and small.

The first staccato burst from a .50-caliber machine gun got many of the Marines pumped.

Many of the Marines aboard the ship, including mechanics and chopper crew chiefs, got a chance to fire a weapon.

The amphibious assault ship Bataan is on its way to the Persian Gulf to drop off Marines and equipment in support of the largest rotation of U.S. troops since World War II. About 25,000 Marines are deploying to Iraq.

With ammunition going to front-line Marines during the war in Iraq last year, those back at bases such as New River, N.C., where many of the Marines on board this ship are from, have had to use their stocks sparingly. That made Wednesday&#8217;s shoot all the more valuable.

&#8220;Ever since the war started, ammunition has been stripped away for the most part,&#8221; Staff Sgt. Sasha Dix said.

The &#8220;gun shoot,&#8221; as the Marines called it, helped the aviators become familiarized with the weapons and make sure they work.

Those who fired M-16 rifles stood in the hangar bay and shot at shadow targets strung across the aircraft elevator, which hoists helicopters from the bay to the flight deck.

Each time a round smacked the water, it made a popping sound.

Toward the bow of the 844-foot ship, Marines fired the .50-caliber machine gun from a helicopter tied down to the flight deck. For many of the Marines, it was the first time firing a 50 cal.

Staff Sgt. Carl Bodfish immediately wanted to do it again after his first try and got back in line.

Before the shooting, Master Gunnery Sgt. Jeffrey Harter briefed the group and encouraged the Marines to ask questions, telling them it was better to ask now or they might regret it once they get to Iraq.

Marines are trying to learn how insurgents shot down some Army helicopters in Iraq to prevent similar attacks against their aircraft. It is not far-fetched that some of the aviators might have to use the .50-caliber machine gun or an M-16 in Iraq.

Maj. Todd Holder, a Cobra attack helicopter pilot, said the insurgents would have a tougher time taking down a Marine helicopter, saying only that the Marines have a different way of doing things.

&#8220;Because we want that guy to think that the next time he thinks about pulling the trigger, is he going to get lucky this time? Or is he going to bite it?&#8221;