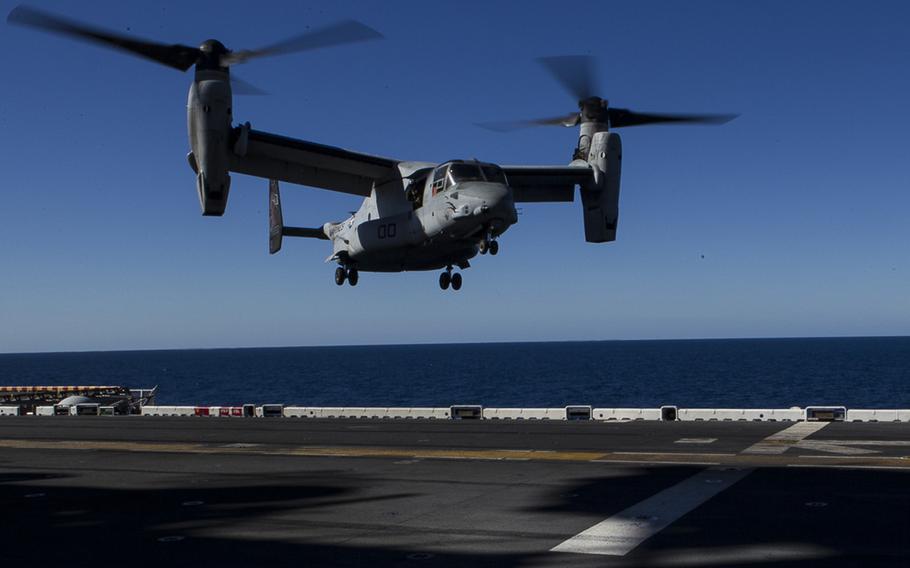 WASHINGTON — The Marine Corps has deemed its Japan-based MV-22 Ospreys safe to fly despite the Japanese government’s request to ground the fleet of tilt-rotor aircraft after a deadly crash off the coast of Australia, a top general said Wednesday.

The Okinawa-based 31st Marine Expeditionary Unit conducted a two-day operational pause of all aircraft to review safety procedures following a crash Saturday of one of its Ospreys off the coast of Australia that killed three Marines, said Lt. Gen. Lawrence Nicholson, the commander of III Marine Expeditionary Force. Following a preliminary investigation and the safety reviews, the Marines returned all of their Okinawa-based aircraft to normal flight status, he said.

“I would never put my air crews or any local citizens in danger by flying an aircraft that I do not believe is safe and ready to fly,” Nicholson said in a prepared statement. “We did not take the decision to continue flight operations lightly.”

Japanese Defense Minister Itsunori Onodera asked the United States on Sunday to ground all of its Ospreys.

It remained unclear Wednesday what led to the crash about 18 miles off the northeast coast of Queensland, Australia, a Marine spokesman said.

The Osprey had taken off earlier Saturday from the amphibious assault ship USS Bonhomme Richard and was attempting to land on the USS Green Bay when it slammed into the deck of the amphibious transport dock and crashed into the ocean, according to an official familiar with the investigation who spoke on condition of anonymity.

The three Marines killed -- 1st Lt. Benjamin Robert Cross, Cpl. Nathan Ordway and Pfc. Ruben Velasco -- are believed to have been trapped inside the sinking aircraft, the official said. Twenty-three other Marines who were aboard the Osprey were rescued after the wreck.

Salvage and recovery operations at the crash site were ongoing as of Wednesday, Nicholson said.

The general defended the Marine Corps’ continued use of the Osprey, despite its checkered past.

The aircraft, which lands and takes off like a helicopter but flies like an airplane, “has proven itself” in the Asia-Pacific region where it has been used to recover and assist victims of earthquakes and typhoons, he said.

It was initially plagued with problems during its development phase from 1991 to 2000 when four high-profile crashes killed 30 people. Ospreys have crashed five additional times since it became operational in 2007, killing nine servicemembers.