Marines on USS Essex work to stay ahead of corrosion Lance Cpl. Michael Callaghan, a Marine with the 31st Marine Expeditionary Unit, uses a wire brush to scrub rust off the window seal of a Humvee aboard the USS Essex. (Kamran Sadaghiani / Courtesy of USMC)

Lance Cpl. Michael Callaghan, a Marine with the 31st Marine Expeditionary Unit, uses a wire brush to scrub rust off the window seal of a Humvee aboard the USS Essex. (Kamran Sadaghiani / Courtesy of USMC) 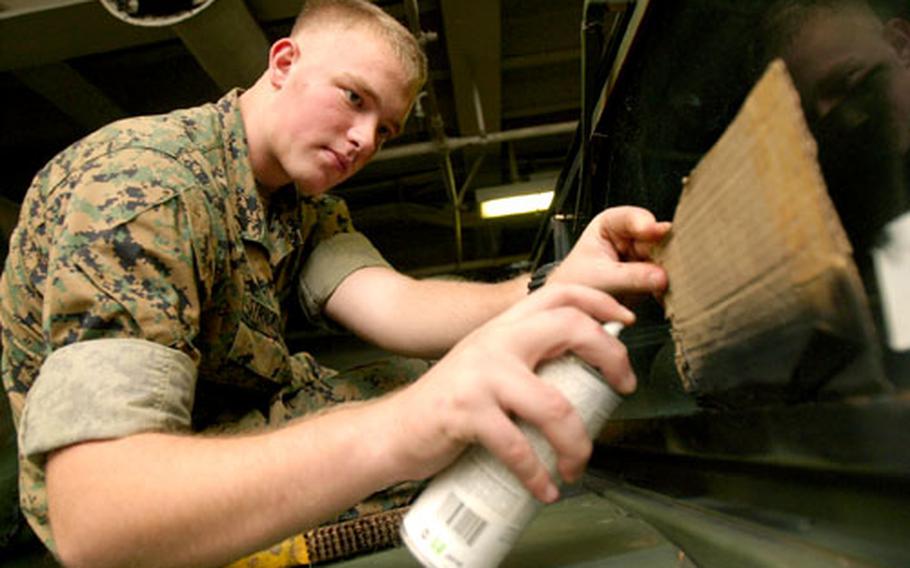 It&#8217;s no different for Marines charged with keeping their tactical vehicles rust-free aboard ships in the tropics. A few weeks of constant exposure to salt water and high humidity can turn a Humvee into a Rust-vee.

That&#8217;s why the motor transportation Marines of the 31st Marine Expeditionary Unit aboard the Sasebo, Japan,-based USS Essex are busying themselves with combating corrosion on the high seas.

&#8220;We operate in a humid environment,&#8221; said Sgt. Christopher L. Battles, the 31st MEU motor transportation noncommissioned officer in charge, according to a recent press release. &#8220;Additionally, the vehicles are exposed to salt water whenever we conduct ship-to-shore operations. Our vehicles rust quickly because of the harsh conditions we put them through and just from sitting inside the ship&#8217;s vehicle storage spaces.

&#8220;Just like sailors constantly chipping paint and repainting their ships, we have to do the same with our vehicles,&#8221; the Okinawa-based Marine said. &#8220;Whenever time permits, we wash off salt water residue, scrape off rust, grease nuts and bolts and repaint the frame, armor and any other crevices around the vehicles. This corrosion prevention is a never-ending job.&#8221;