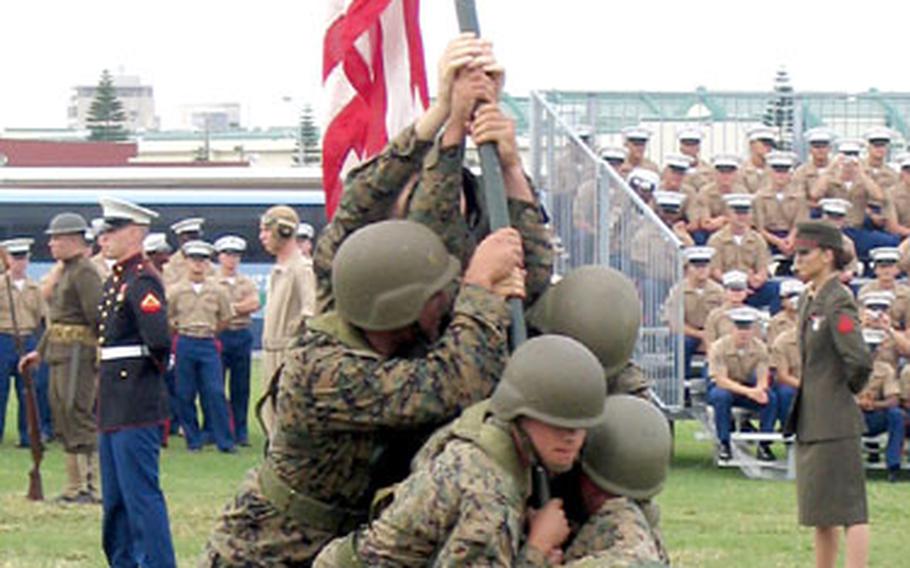 Marines re-enact the raising of the flag on Mt. Suribachi during the Battle of Iwo Jima at the Marines Corps 230th birthday celebration on Camp Foster, Okinawa, on Thursday. (David Allen / S&S)

Marines re-enact the raising of the flag on Mt. Suribachi during the Battle of Iwo Jima at the Marines Corps 230th birthday celebration on Camp Foster, Okinawa, on Thursday. (David Allen / S&S) 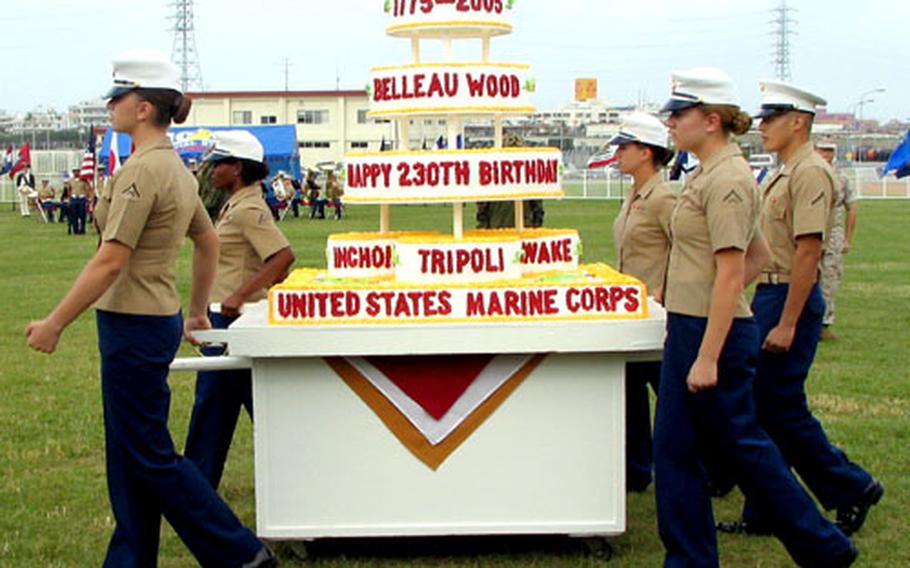 Marines carry the birthday cake onto the parade deck at Camp Foster on Thursday. Printed on the cake were names of some of the most renowed battles Marines have taken part in over the years. (David Allen / S&S) 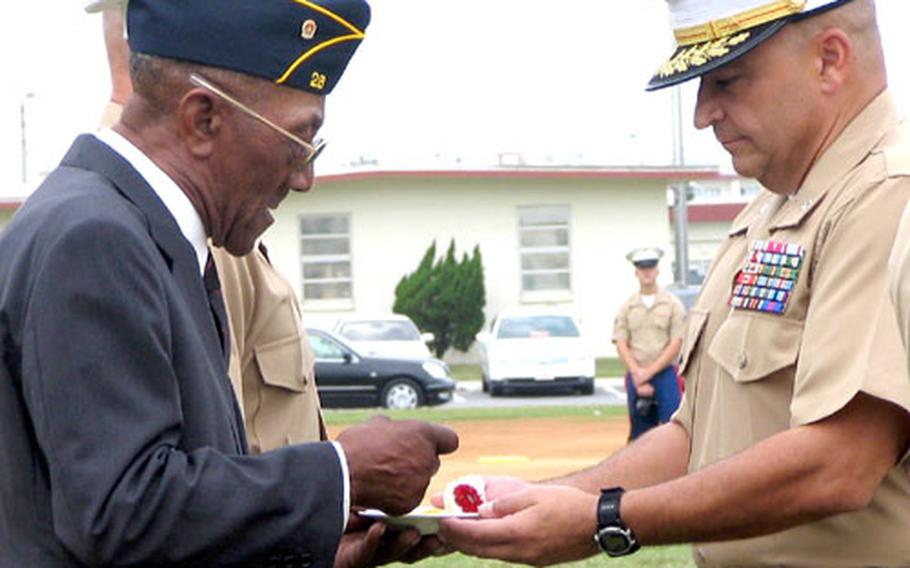 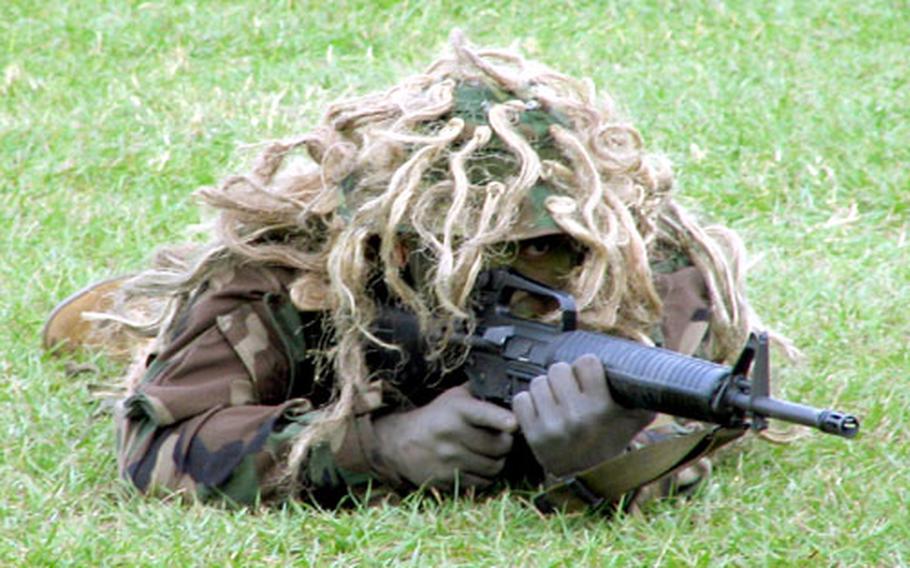 A Marine sniper blends in with his surroundings during a uniform pageant at Thursday&#39;s celebration of the Marine Corps&#39; 230th birthday on Okinawa. (David Allen / S&S) 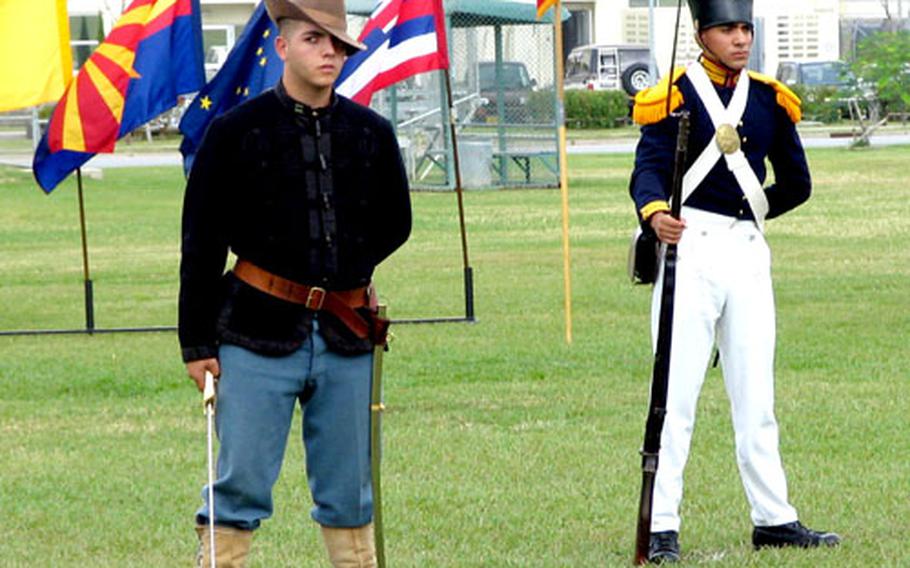 Marines dressed in the uniforms worn during the Spannish American War and the Mexican War, at Thursday&#39;s celebration. (David Allen / S&S)

It had rained overnight but the drops held off during the hourlong ceremony on the parade deck, allowing those gathered to enjoy the uniform pageant of Marines in the successive garb of Leathernecks from the Corps&#8217; forming in 1775 at Tun Tavern, Philadelphia, during the Revolutionary War to a few of today&#8217;s snipers attempting to blend in with the damp grass.

The pageant was followed by the traditional reading of the birthday message that Gen. John A. Lejeune, the Marine Corps&#8217; 13th commandant, made in 1921, followed by a message from current commandant Gen. Michael W. Hagee.

&#8220;The sense of honor, courage and patriotism that epitomized those who answered that first call to arms 230 years ago is still indelibly printed on our ranks today,&#8221; was the message Hagee conveyed. &#8220;Let us strengthen our ties to the past by paying homage to those who have gone before us.

&#8220;As we honor the sacrifices of our wounded and fallen comrades, our commitment to one another remains unshakable. We take special pride in the actions of the Marines now serving in harm&#8217;s way.&#8221;

One of the ceremony&#8217;s highlights was the re-creation of the raising of the flag on Iwo Jima 60 years ago, during World War II. It was followed by the traditional cutting of a four-tiered birthday cake by Brig. Gen. Joseph V. Medina, commanding general of Marine Corps Base Camp Butler.

Medina presented a piece of the cake to the oldest active-duty Marine present, Col. Bradley E. Turner, 53, chief of staff for Marine Corps bases, who then gave a piece to the youngest Marine present, Pfc. Osbaldo Escatel, 18, assigned to Camp Kinser.

Medina then served a piece of the cake to Lawrence E. White, 81, the oldest retired Marine present. White, who retired as a sergeant major, joined the Marine Corps in 1943.

The Corps&#8217; birthday also was celebrated with a 230-mile run on Camp Foster consisting of 650 individuals running one-mile increments for 39 hours and culminating in a formation run of 1,500 Marines for the final two miles Thursday morning.