Marines, Okinawans team to clean up outside Camp Hansen 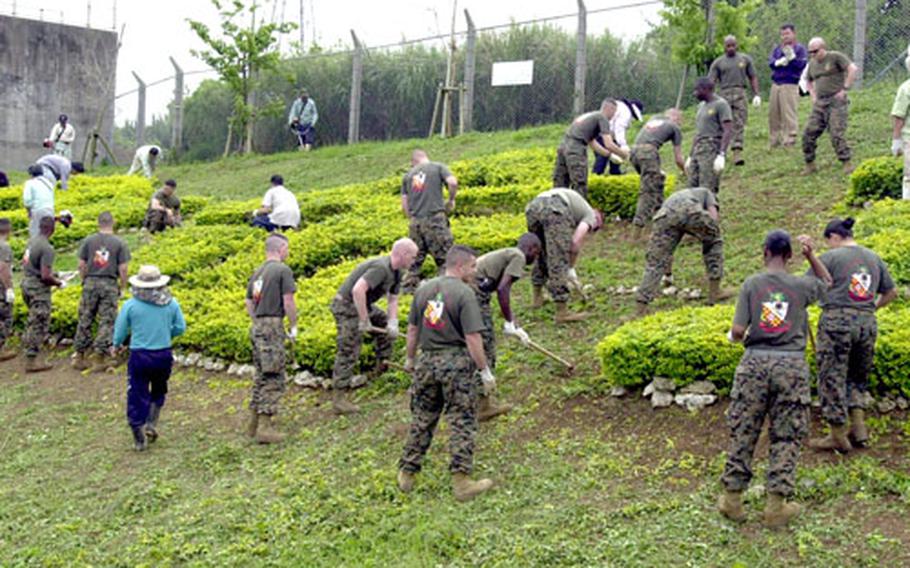 Marines from 3rd Intelligence Battalion team with local business leaders on Thursday to clean up a portion of Highway 104, which runs by Camp Hansen, Okinawa. (Fred Zimmerman / S&S)

Marines from 3rd Intelligence Battalion team with local business leaders on Thursday to clean up a portion of Highway 104, which runs by Camp Hansen, Okinawa. (Fred Zimmerman / S&S) 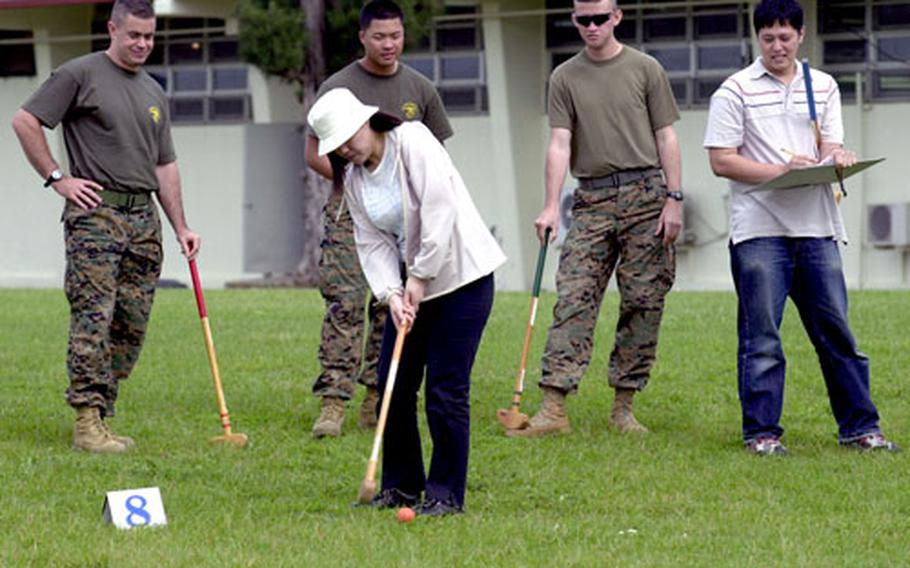 Members of the Kin Town Chamber of Commerce and Marines from 3rd Intelligence Battalion take part in a game of “ground golf” on Camp Hansen on Thursday afternoon. (Fred Zimmerman / S&S)

KIN TOWN, Okinawa &#8212; If the grounds outside the Camp Hansen fence line look a little spiffier these days, tell it to the Marines &#8212; specifically, the 24 Marines from 3rd Intelligence Battalion who teamed with local business leaders Thursday afternoon to spruce up a portion of the grounds along Highway 104.

The Marines joined Kin Town Chamber of Commerce members to trim bushes and cut down weeds at the intersection of 104 and Highway 329, where the bushes are arranged to form words and symbols. The row starts with the Kin Town seal, then the words in katakana, followed by the seal and words for the chamber of commerce. Toward the end is a star symbol followed by the word &#8220;CAMP&#8221; and Hansen spelled out in katakana.

This is the first time the Marines from 3rd Intel have cleaned up the area, but it won&#8217;t likely be the last: They&#8217;ve agreed to continue doing cleanups once a month, according to Chiyoko Kochi, Camp Hansen&#8217;s community relations specialist.

She said the community is very appreciative of the volunteer work, noting that such maintenance normally is difficult but is &#8220;easy &#8230; when you have the help of the Marines.&#8221;

The battalion&#8217;s top enlisted man, Sgt. Maj. Willie Perry, said the volunteer work also &#8220;helps develop camaraderie and relationships with one another and the local Okinawans.&#8221;

Also, he added, the Marines from the unit &#8220;get a kick&#8221; out of volunteering and he enjoys being out there with them. He said he hopes they learn they &#8220;can not only defend a country in combat but also support a country through community relations.&#8221;

Kochi said the monthly event also provides an opportunity for a cultural exchange, with a picnic and games after the cleanup is complete. On Thursday, chamber members went onto Camp Hansen for some yakisoba and a game of &#8220;ground golf&#8221; with the Marines.

Marine officials said such events are almost daily occurrences on Okinawa. In 2005, they said, Marines took part in more than 1,500 community-relations events &#8212; an average of 130 each month &#8212; involving more than 15,000 Marines and almost 175,000 Okinawans. Events at which Marines volunteered, they said, included everything from English-language programs and beach cleanups to retirement home visits and the Special Olympics.