Marines' night river cruises in Iraq are no joy rides 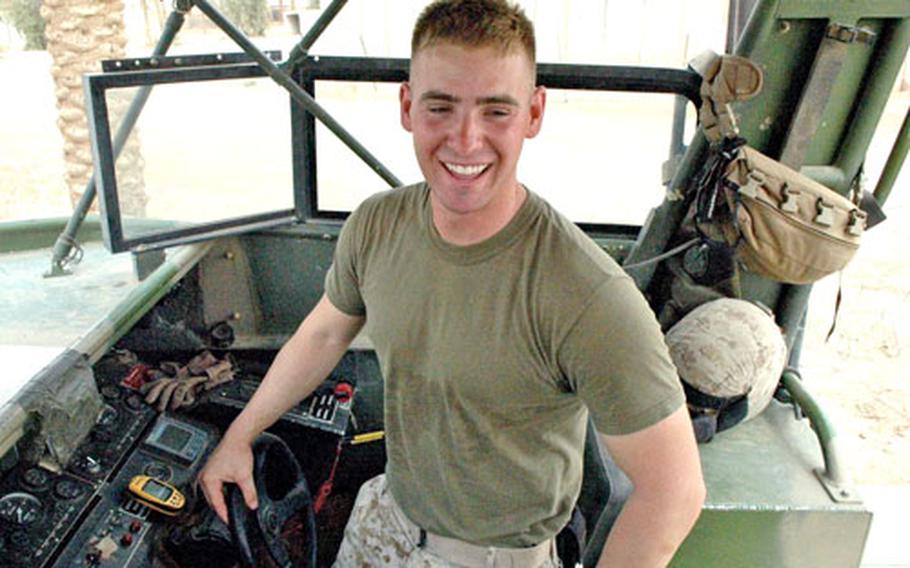 U.S. Marine river patrol boats in Ramadi are stored on land and towed to launch sites along the Euphrates River prior to missions and patrols. (Monte Morin / S&S) 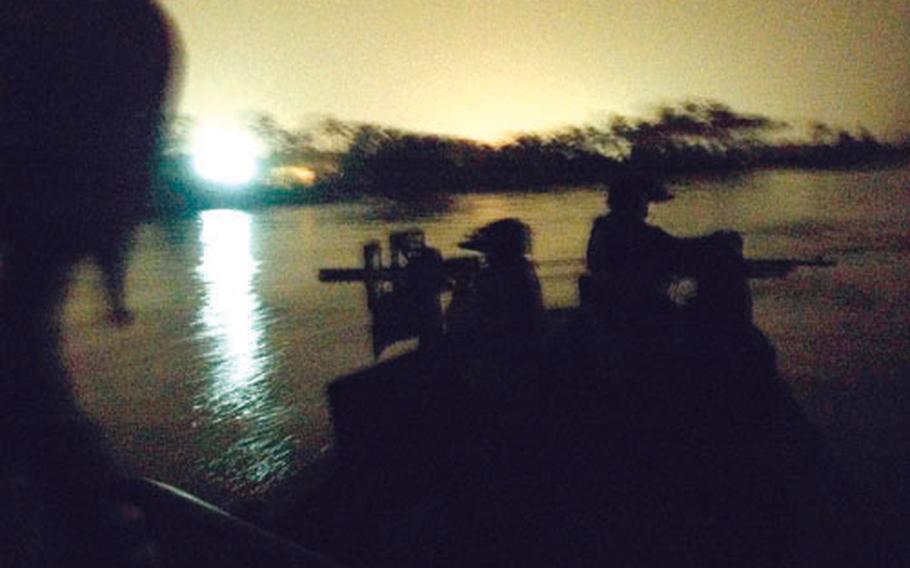 Bow gunners on a U.S. Marine patrol boat scan the banks of the Euphrates River for trouble early one morning near Ramadi. (Monte Morin / S&S)

RAMADI, Iraq &#8212; It was well after dark and the musty waters of the Euphrates River had taken on the color of greased gunmetal as they skirted the city.

A rickety fishing boat coasted silently along the reed-choked banks and closed distance with a group of jet boats piloted by U.S. Marines. The patrol had been uneventful until now, but when the beam of an infrared spotlight revealed electric wires and no passengers in the Jon boat, the Marines grew concerned.

Cote&#8217;s worry turned to relief when crewmen radioed back that the vessel contained no explosives. The wires were probably left behind by one of the many Iraqi fishermen who specialize in a form of angling called electro-shock fishing.

Instead of using a rod and a reel, the Iraqi sportsmen use a flashlight to blind and confuse river fish. They then shock the fish by jabbing it with an electrode hot-wired to a battery or generator. The angler then uses a net to scoop the fish out of the river.

In the last several months, though, Cote and his boat crews have had a lot more dangerous things to worry about than electric fishing devices.

As U.S. troops wage a renewed campaign to rid Ramadi of insurgents and criminal gangs, Cote&#8217;s Dam Security Unit Two has played a growing role in efforts to capture key cell leaders and interdict insurgent mortar and rocket teams who have taken to the river to avoid checkpoints on land.

At the same time, Cote&#8217;s men have found themselves shooting their way out of riverbank ambushes or taking cover from waterfront mortar attacks.

The river &#8212; an ancient source of sustenance and means of travel for Iraqis in cities and villages &#8212; has been used by insurgents to ferry arms from rural areas to the city of Ramadi, on the river&#8217;s southern bank. The enemy has also used small islands and sandbars along the waterway to launch mortars and rockets at U.S. positions.

Most recently, Cote&#8217;s heavily armed SURCs intercepted a boat that three insurgents were using to transport a 10-foot rocket tube, a mortar, assault rifles and equipment for making roadside bombs. Marines believe the men were probably transporting the equipment to a cache site elsewhere along the river, where they were likely planning to launch an attack.

Before they could reach the shore, they were spotted by the Marine patrol.

The Marines yelled at the men to stop and fired a warning flare. Before the patrol boats reached the men, the insurgents jumped overboard and attempted to swim for it. They were never seen again, McGuigan said, and are believed to have drowned.

Their boat was scuttled as well &#8212; albeit with some difficulty.

The unit &#8212; which falls under the 2nd Assault Amphibian Battery, 2nd Marine Division &#8212; consists of roughly a handful of the highly maneuverable, low-profile boats. Each boat measures 40 feet long and weighs 11 tons and carries a mix of heavy and light machine guns.

The unit was initially created to guard a major dam in Haditha, but was detached to Ramadi in early May.

Since that time, the unit has been used to transport Navy SEALs on stealth missions and to cut off river escape routes for insurgents during cordon-and- search operations. The unit also patrols the river regularly, hunting for insurgents and weapons.

While the SURCs are armed with Gatling guns and .50-caliber machine guns, they are only lightly armored. This is the main reason the unit operates only at night.

So far, the unit has been attacked twice.

The first time was when Marines were placing their boats in the water. The river boats are towed to a number of launch sites along the river by seven-ton trucks and backed into the river on trailers. On one occasion, insurgents launched a mortar attack while the boats were putting in and six Marines were injured.

The second time, roughly a month and a half ago, insurgents opened up on the boats from both riverbanks, firing rocket-propelled grenades and bullets at the line of boats.

For Lance Cpl. Jonathan Bowling, 21, of Gainesville, Fla., the ambush was his first taste of combat.

Bowling said the insurgents began by taking potshots at the boats, but when the volume of firing increased and bullets started splashing into the water near the boats, crewmen realized what they were up against.

Sgt. Liam Foster, a captain of one of the river boats, said there were other occasions in which insurgents appeared to be getting ready to attack, but that boat crews &#8220;beat them to the punchline.&#8221;