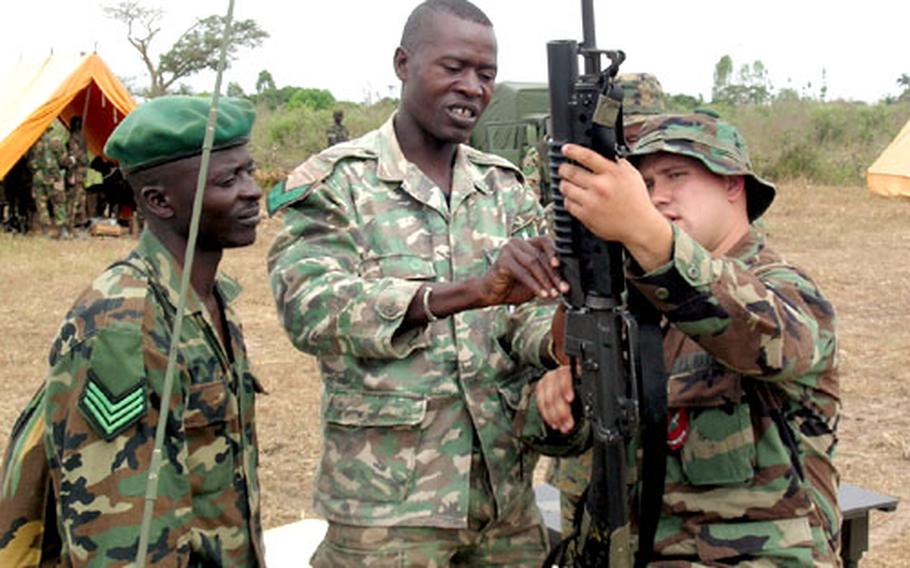 A U.S. Marine demonstrates an assault rifle to members of the Gambia military. The training session was part of the 2004 West African Training Cruise. (Photo courtesy of U.S. Marine Forces-Europe)

A U.S. Marine demonstrates an assault rifle to members of the Gambia military. The training session was part of the 2004 West African Training Cruise. (Photo courtesy of U.S. Marine Forces-Europe) 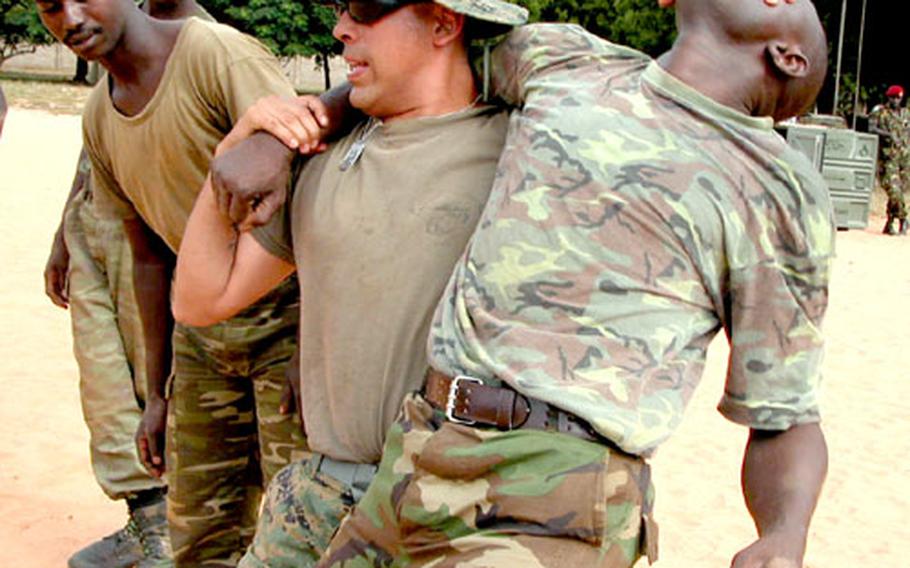 Members of the U.S. Marines and Navy are concluding a series of training exercises with several African nations that featured a demonstration of a high-speed catamaran, the latest ship in the Marine inventory.

The exercises, part of the biennial West African Training Cruise, are important in building ties between the United States and militaries of other countries, said Marine Maj. Gen. Arnold Fields, deputy commander of Marine Forces Europe in Stuttgart.

Meanwhile, the HSV 2 Swift, the new boat being leased by the United States from an Australian company, is continuing along the West African coast for the last phases of the exercise.

The exercise gave the Marines a chance to put into use what they have trained to do.

&#8220;It&#8217;s important to get our Marines in real-world situations. The tempo picked up in everything we did, from operations in the field to convoys,&#8221; said Marine 1st Sgt. Darren Cook, the WATC staff noncommissioned officer in charge.

In addition to learning to work with other militaries, the event also gave the United States and its partners the chance to experiment with cutting-edge equipment, which this year included the Swift. The Swift is a wave-piercing, aluminum-hulled catamaran with military enhancements that include a helicopter flight deck to conduct night operations and refuel helicopters, an improved communications suite, special ramps for military vehicles, and the ability to launch and recover small boats and unmanned vehicles.

Fields, after training and meeting with troops in Gambia, said the exercise was rewarding on many levels.

&#8220;We have been here a couple of days now, and we have done several things from having a few classes on weapons systems with the defense force [and] firing weapons together,&#8221; he said.

&#8220;We have trained in hand-to- hand combat, but, as I said to the chief of defense and to the vice president of Gambia, one of the greatest takeaways will be improved friendships.&#8221;

Perhaps more practical than friendships is the greater understanding of the various African militaries.

&#8220;In a different situation, we could be working with them, so being able to train with them now helps out,&#8221; said Marine Sgt. Matthew Akers.

As an example, he pointed out that hand signals used by Gambian troops are different from those used by Marines. &#8220;By learning how our techniques differ, we can overcome cultural and communication-related challenges before we work together in a real-world situation.&#8221;